A Life on the Ocean Wave

After doing my researches on the German Dornier Do. 217E bomber which was shot down in St.Just in western Cornwall, I tried very hard to find the graves of the crew. It seemed likely to me that, whatever side they might have been on in the conflict, they had probably been interred a very, very long way from their homes and families. After failing to find their graves in the two cemeteries at St.Just, I visited the cemetery at Penzance.

The dead crew members of the Dornier bomber were not in that particular cemetery either, but I did find a great many other graves from the Second World War.

And at the time, I was forcibly struck by two things. First of all, the majority of the dead were from ships, completely unlike, for example, the cemetery where my father is buried in South Derbyshire. Here more or less all the war casualties are from the Army or possibly, the RAF. Secondly, I became very aware of the discrepancy between what we do and say on Armistice Day, and what dreadful fates have befallen the people who are buried in these graves. We all wear our poppies, and dutifully pledge that “At the going down of the sun and in the morning, we will remember them.” yet I am very sure that we don’t, despite all our best intentions.
The poor people in those graves in Penzance Cemetery no longer have any life whatsoever, thanks to their decision to join up and serve their country. They hit a brick wall in time, sometimes known precisely down to the very minute, and then no more. And they weren’t anonymous. They all had their own lives just like we do now, with families, girlfriends, wives, beer to drink and Christmases to celebrate.

On Friday April 18th 1941, the Scottish Musician was damaged by aircraft bombing at a position some three miles from St. Ann’s Head on a bearing of 205°. St. Ann’s Head is the extreme south western tip of Pembrokeshire in south west Wales.

William Baxter was the only casualty. He was just twenty one years of age. William was the son of Richard George Baxter and Ruth Baxter of Penzance and the husband of Beatrice Joy Baxter.

The Scottish Musician was consequently further damaged on January 5th 1942 when she hit a mine at position 52° 16’ N, 01° 59’ E, which is near the port of Harwich in Suffolk in East Anglia. This resulted in the death of the twenty year old cabin boy, Albert Henry Jones. Albert is buried in Canada in the “Notre Dame des Neiges” Cemetery in Montréal.

Ronald Norman Neale was an Ordinary Seaman. He served on board HMS Warwick which was an Admiralty ‘W’ class destroyer. Young Ronald was only twenty years of age when he was killed, on February 20th 1944. He was the unmarried son of James and Linaol Neale of Grove Park, London. On his grave, his grieving parents have had inscribed “Gone from us all, but always in our thoughts”, as Ronald no doubt was for the rest of their lives. On the day that I visited, there were flowers on his grave, conceivably from one of his aging siblings perhaps, or possibly his nephews or nieces. 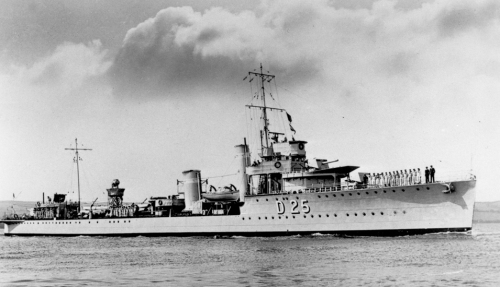 HMS Warwick was itself only twenty seven years old, having been launched in 1917. As “D-25” she participated in both the First and Second World Wars, before she was torpedoed and sunk on the day that Ordinary Seaman Ronald Norman Neale was killed. From July to November 1943, she had been in the Bay of Biscay on anti-submarine duties, as part of the RAF Coastal Command offensive. In November she participated in Operation Alacrity,  helping to set up and supply Allied air bases in the Azores.
Having returned to Britain in January 1944,, HMS Warwick was tasked with leading an escort group operating in the South Western Approaches, guarding merchant ships against surprise attacks by German E-boats. The destroyer was patrolling off Trevose Head just north of Newquay on Cornwall’s northern coast when she was torpedoed by the U-413. At the time, HMS Warwick  was under the command of Commander Denys Rayner. The warship sank very quickly, in just a few minutes, with the loss of over half her crew.
The U-413 had been launched on January 15th 1942, and was commanded by Kapitänleutnant Gustav Poel, who, unlike the vast majority of German submariners, was to survive the war.

As well as the Warwick, the U-413 was an extremely successful submarine which sank five merchant ships amounting to a total tonnage of 36,885 tons. By August 20th 1944, the U-413  was  commanded by the 26 year old Oberleutnant Dietrich Sachse. 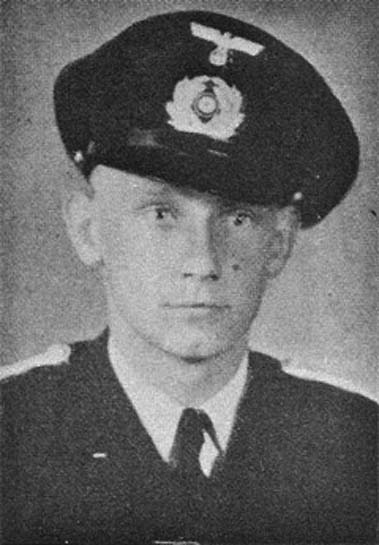 On this summer’s day, though, the U-413 was sunk in the English Channel to the south of Brighton, by depth charges from the British escort destroyer HMS Wensleydale and the destroyers HMS Forester and HMS Vidette. Forty five members of the Kriegsmarine were killed, including the fresh faced young Captain.  Only one member of the crew survived. His name is not recorded but it is thought unlikely to have been Ishmael. Oy vey!