The Beast of Sarlat

The « Bête féroce de Sarlat » was famous in Périgord in central France from 1766 onwards. Its peculiarity was not to attack women but exclusively to kill men.

According to that font of all knowledge, Wikipedia….

“The « Bête de Sarlat » was a man-eating animal behind a series of attacks against human beings in the Périgord province of France. During the spring of 1766, a dozen or so fatal attacks were been recorded in the villages around Sarlat. The inhabitants of the region were filled with genuine panic, beginning to talk of a gigantic beast thirsting for human blood or even a werewolf. The creature managed around fifteen victims more, before in August 1766 the peasants and noblemen organised a beat together with more than a hundred rifles. During the course of this, the animal was flushed and killed. It was a wolf infected with rabies but the people did not readily accept this explanation and continued to talk of a werewolf.”

One website devoted primarily to the « Bête du Gévaudan » has a little to say about the « Bête de Sarlat » :

After all, the two areas are not a million miles apart in distance, although the two time periods clash, with the more famous Gévaudan monster killing its victims between the early summer of 1764 and June 19th, 1767 when a local man named Jean Chastel supposedly killed it during a hunt organized by a local nobleman.

“The Bête de Sarlat terrorised the Périgord province of France in the XVIIIth century. Its first appearance came in March 1766, when it carried out around ten killings in the surrounding area. The fear that the Beast caused can be imagined. It was from this time onwards that the myth of an enormous monster thirsting for human blood arose.
But in the month of August 1766, it was finally identified as a wolf suffering from rabies. The people did not really believe this explanation and it must be said that in the intervening time at least another eighteen more people were killed. The monster was seen absolutely everywhere, even in the dark backstreets of Sarlat. When the people’s fear and exasperation was at its height, the legend of the beast grew to such a point that the good people of the area no longer dared go out as soon as it got dark.

From this time onwards, both peasants and nobility came together with more than a hundred rifles and began a beat. The creature was found, pursued and shot. This death was confirmed by an assembly of a large number of happy eye-witnesses and seems to have taken away once and for all the justified fears of the local people. We know very well that the wolf with rabies and the man with rabies seem equally overcome with madness: frothing at the mouth, slavering and biting. They are terrifying to see and dangerous to approach. But this killing only stopped the spread of the rumour. Nothing really changed either in Sarlat or in the surrounding region, where they still spoke of the beast as a werewolf.”

“The first time that this creature came to people’s attention was in the spring of 1766 when it had already committed a dozen murders in the villages around Sarlat. From then on, absolute terror reigned in the province of Périgord. They spoke of a gigantic beast, thirsting for human blood, and soon the legend grew to such a point that the people no longer dared to go out as night was falling, because it was claimed that the monster had even been seen in the very streets of Sarlat itself. The creature killed another good fifteen or so people before both the peasants and the aristocrats, driven to it by fear, organised a beat with more than a hundred rifles. The animal was flushed and killed, and it was stated to be a rabid wolf. Even if this particular animal was killed, its legend remained alive and well throughout the whole region, where they spoke for a good many more years of a bloodthirsty werewolf.”

“The Beast of Sarlat terrorised Périgord in the XVIIIth century. Its first appearance dates back to March 1766 when it had already committed around a dozen murders in the neighbouring areas. It is easy to imagine the terror that it provoked. It was from this time that there began the myth of an enormous monster thirsting for human blood. In the month of August 1766, however, the animal was finally identified as a wolf carrying rabies. The ordinary people found it difficult to accept this explanation, and it must be said that in the meantime it had killed at least eighteen more people.
People would see the creature absolutely everywhere, even in the dark alleyways of Sarlat. With fear and anger both reaching their peak, the tales told about  the beast grew to such a level that the good people of the region no longer dared to go out as night fell. From that moment both peasants and aristocrats came together with more than a hundred rifles and organised a beat. The animal was found, tracked and shot. This death was witnessed by so many ecstatic eyes and seemed to have rid the local people for ever of the object of their well justified fears.
We know very well that a wolf or a man with rabies both seem equally overcome with madness, slavering at the mouth, frothing and biting. They are terrifying to see and dangerous to approach. But this only stopped the rumours from spreading, nothing had changed and both in Sarlat and the surrounding area, they still talk of the beast even now as a werewolf.”

At the time in 1766, a broadsheet about the beast was published locally in the province.

Here is the bottom half with the text. Hopefully, the words are a little clearer…. 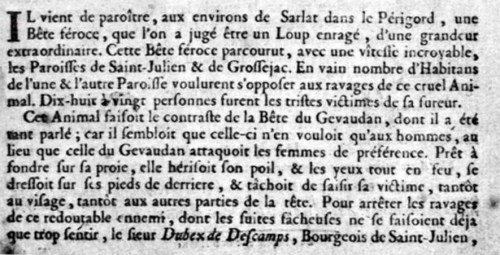 Here is a translation of the words you can see, but unfortunately, this is, literally, only half the story. And it seems supremely ironic that on the scan of the front page, you can see some of the print from the back page in reverse, but I cannot find it anywhere on the Internet…

“The curious, remarkable and true tale of the deaths and disorder caused by the ferocious beast, in the area around Sarlat in the Périgord region (of France).
Recently there has been seen in the area around Sarlat in the Périgord region, a ferocious beast, that was considered to be a rabid wolf, but one of an extraordinary size. This ferocious beast roamed, at an incredible speed, over the parishes of Saint-Julien and Grossejac. In vain did a number of the inhabitants of one or the other parish try to put a stop to the depredations of this cruel animal. Between eighteen and twenty people were the sad victims of its fury.
This animal was in complete contrast to the Beast of Gévaudan of which so much has been said; for it seems that the former hated only men whereas the Beast of Gévaudan preferred to attack women. When ready to seize its prey, it put up its hackles, and its eyes became flaming red. It raised itself up on its back legs and tried to seize the victim, sometimes by the face, sometimes by other parts of the head. To stop the ravages of this formidable enemy, whose terrible deeds were already beginning to weigh only too heavily on people, the nobleman Descamps and the gentleman Saint Julien……

Raising itself up on its hind legs, of course, is not normal behaviour for a wolf, animals which nowadays seem to stick firmly to a four legged approach. Flaming red eyes, of course, are not a feature of any known wild animal.

The on-line edition of the newspaper « Sud-Ouest » reports…

“In the XVIIIth century a monster terrorised the south eastern part of the province of Périgord for several weeks. The creature appeared in March 1766 and around a dozen people were killed in the villages around Sarlat. Then was born the myth of an enormous beast thirsting for human blood, like some kind of werewolf.
In the month of August in the same year certain people identified it as a very large wolf infected with rabies. But the population were not reassured by this, especially as in the meantime eighteen other people had been killed. People glimpsed the beast everywhere, even in the dark little lanes of Sarlat. The “population of the village shut themselves away in their houses. Around a hundred people armed with rifles, both peasants and nobles then organised a beat. A rabid wolf was killed. The attacks stopped but the legend lived on, that of a werewolf.”

Its report continues with a device that is known, probably, to newspapers the whole world over. Indeed « Sud-Ouest » could not consider itself a real newspaper if it did not  have that desire to thrill, to terrify and then to sell more newspapers…

« Un loup a-t-il été aperçu en Dordogne ? »
“Has a Wolf been seen in the Dordogne?

«This animal was photographed at Saint-Amand-de-Coly. Other people in the immediate area have been seeing it for the last two weeks. According to government sources, the theory of a wolf, however, is not particularly credible and some doubt may be expressed. Quentin Sarlat, aged 20, was coming back from Montignac last Friday and came across this animal in a field at Saint-Amand-de-Coly.

He took a photograph of it, unlike one of his friends who had already seen it two weeks previously. «At first, the animal was much more distant and then it began to run across the field in my direction only to stop about ten metres away from me. He looked at me for at least thirty seconds, and I did not dare get out of my car. Then the animal went off round the back of the car, without ever taking his eyes off me »

As for Aurélien Viau, the regional head of the Office National de la Chasse et de la Faune Sauvage (The Ministry of Hunting and Wildlife) said that there was little chance that this was a wolf.

«Looking at this photograph, I would say that it’s a dog because the animal is too fat, it’s wearing an orange collar and it does not fear man. But nevertheless we will be going over there to have a look round. »

The collar that the animal is wearing could well be an identification collar, as some method of tagging wolves. On the other hand, it is certainly a wolf which seems to have eaten all the pies.

After this, of course, widescale panic seems to break out and the questions below are suddenly all asked in the newspaper. Nobody seems to notice it is that old strategy….”thrill, terrify, sell”……

“Report from the Dordogne: the wolf was just a husky.”

Most significant of all perhaps is the verdict of the historian Jean-Marc Moriceau who in a newspaper article entirely worthy of our Daily Mail will:

“retrace the blood soaked career of the wolf in France. 8000 dead people in 250 years, and perhaps it isn’t all over yet….”

Perhaps the writer who argued in one of my previous blogposts that the entire French nation was too often guilty of collective hysteria in the face of these much maligned and gentle animals was correct. This website makes « Sud-Ouest » appear almost conservative in its ideas….