Anthony Richardson was educated first at Marlborough College and then at Manchester University. Before the war he would publish a good few books, all of them detective novels, historical novels,  fantasy thrillers or what were then called  “bodice rippers”. They were almost what Quentin Tarantino would call “Pulp Fiction”, but without the sexual content. During his lifetime, Richardson probably made more money from his thrillers and detective stories rather than from his books of poetry, but that’s just a guess.

Nowadays the pulp fiction books are quite rare but they are still obtainable, sometimes at a considerable price. Here is “Ransom” (1925). The plot is that a bad boy returns as a success to the school that expelled him and marries the daughter of his former teacher. Note the UFO hovering over the book:

During the war years, Richardson turned to poetry. After the war, though, he went back to popular prose. His books included “Wingless Victory” (1951), “The Rose of Kantara” (1951): 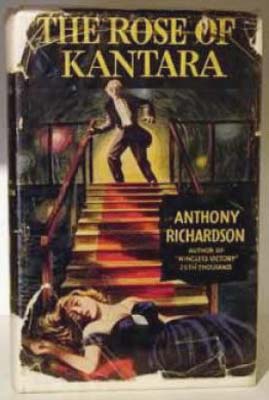 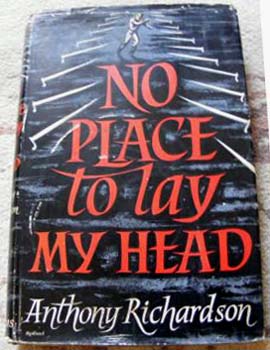 Richardson must have made quite a bit of money too from two very successful non-fiction books. One was “Nick of Notting Hill: The bearded policeman. The story of Police Constable J. Nixon of the Metropolitan Police”:

The other was “Wingless Victory”, a World War Two prisoner of war escape story:

During the war years, Richardson wrote three books of verse. The first was called “Because of these: Verses of the Royal Air Force” (1942). I bought a copy about a year ago for two or three pounds. My book has the date April 4th 1942 written inside the front cover, presumably the date of purchase. On this date the Luftwaffe attacked the Soviet fleet at Kronstadt but without success. The book itself was bought at Goulden’s of Canterbury for 1/6d or 7½ pence in today’s money. Goulden’s, an important shop in the area, seems to have ceased trading in 1947. Their shop was on the High Street:

Here is what they sold:

I initially selected two poems to look at from this book. You have already met one of them in my first post, “W/OP–A/G Blenheim Mk IV”, and here is the second of the two entitled “There was an air gunner”.

The first four verses describe a man who lives in Devon, a particularly beautiful agricultural county in the south west of England. There are two verses which list “all that yields beauty and blessedness” in his life, which is, at that moment, completely and totally perfect. So much so that he begins to sing in sheer happiness. He sings the traditional Devon folk song “Uncle Tom Cobleigh”, which every child in England learnt until the Rolling Stones arrived in the 1960s to put a stop to all that kind of innocent childishness:

Here are the lyrics.  of Uncle Tom Cobleigh”.  And here is somebody singing them:

The man’s “lusty voice” echoes down the steep Devon valley, but there is also a supernatural note introduced because “There they echo still.” The supernatural idea is developed in the last verse by the fact that the man has had his voice cut short by violent death on a bombing mission to Cologne. Nevertheless, when the sun in spring is bright, the Devon valley now has, in ghostly fashion, “a voice its own”:

Since I picked out the first two, I’ve discovered a few more little gems in “Because of these: Verses of the Royal Air Force” and I will show you them next time.