“The Memorial: Beyond The Anzac Legend” with Dr Neil Oliver

Recently I have been watching a TV series with Neil Oliver about the Australian War Memorial in Canberra: 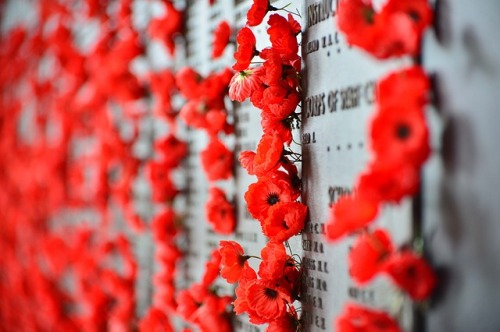 It was called “The Memorial: Beyond The Anzac Legend” and it was on History Channel.
Here is the link.

This is an extremely moving set of five programmes and in my opinion by far the best work that Dr Oliver has ever done on television:

One episode featured the letters of two brothers initially from Manchester, England who then settled in South Australia and became Australians. The elder brother served as Second Lieutenant John Alexander Raws and his younger brother was Lieutenant Robert Goldthorpe Raws. After Gallipoli, they were both sent to France and the disastrous Battle of the Somme.

Robert was to die on either July 28th or 29th 1916 and John was killed shortly afterwards on August 23rd 1916. Their biographical details are available here. Firstly John Raws and then his brother Robert.
What makes it all so interesting is the fact that the letters home from the two officers have been preserved and can be downloaded from this link.

The best thing is to do is to download them as a 164 page PDF document. I actually right clicked the download link on my computer, and then I selected “Save target as”. I could then choose where the letters were downloaded on my computer. I am no computer wizard, and I found that if I just clicked “Download”, I couldn’t find them afterwards. At least two lost copies are just wandering around inside the machine somewhere.

The whole point about these letters is that, for some unknown reason, they came through to the people waiting at home without the censors doing anything about them. I have read a fair amount about the Great War and I have never come across any letters quite like these.

Some of the things said are just unbelievable by the censorship standards of the day. Just to encourage you to take that first step, here are a few extracts, with the page references:

There is something rather humorous in this situation, when I actually come to it.

John Alexander Raws, who cannot tread upon a worm; who has never struck another human being except in fun; who cannot read of the bravery of others at the front without tears well into his eyes; who cannot think of blood, and mangled bodies, without bodily sickness, this man, I, go forth tomorrow to kill and maim,  murder and ravage.

But I am glad to go. It is what I set out for, and the mission must be fulfilled:

How we do think of home, and laugh at the pettiness of our little daily annoyances. We could not sleep, we remember, because of the creaking of the pantry door, all the noise of the tram cars, all the kids playing around and making a row.
Well, we can’t sleep now because six shells are bursting around here every minute, and you can’t get much sleep between them:
Guns are belching out shells, with the most thunderous clap each time;
The ground is shaking with each little explosion;
I am wet, and the ground on which I rest is wet;
My feet are cold. In fact, I’m all cold, with my two skimpy blankets;
I am covered with cold, clotted sweat, and sometimes my person is foul.
I am hungry;
I am annoyed because of the absurdity of bloody war;
I see no chance of anything better for tomorrow, or the day after, or the year
after;
One could go on and on…..
And don’t think I always sleep on the wet ground. I sometimes get a dry bit. And I had a hot bath yesterday, and I am clean-for the time. By the way, while I was having my bath, another officer of his Majesty’s gallant forces was blown to pieces a little way in front. He had just come out of the trenches and was going to have his bath.

I am still alive but living rather a risky existence, what with shells and bullets and bayonets…..

I write from the battlefield of the Great Push with thousands of shells passing in a tornado overhead and thousands of unburied dead around me. It seems easy to say that, but you who have not seen it can hardly conceive the awfulness of it all:

My battalion has been in it for eight days, and one-third of it is left–all shattered at that. And they’re sticking it still, incomparable heroes all. We are lousy, stinking, ragged, unshaven, sleepless. Even when we’re back a bit we can’t sleep for our own guns. I have one puttee, a dead man’s helmet, another dead man’s gas protector, a dead man’s bayonet. My tunic is rotten with other men’s blood and partly splattered with a comrade’s brains.
It is horrible, but why should you people at home not know? Several of my friends are raving mad. I met three offices out in No Man’s Land the other night, all rambling and mad. Poor Devils!

Myself, I am alright. I have had much luck and kept my nerve so far. The awful difficulty is to keep it. The bravest of all often lose it. Courage does not count here. It is all nerve. Once that goes one becomes a gibbering maniac. The noise of our own guns, the enemy shells, and the getting lost in the darkness.
You see this is enemy country. We’re in the remnants of their trenches and wrecked villages, and the great horror of many of us is the fear of being lost with troops at night on the battlefield. We do all our fighting and moving at night and the confusion of passing through a barrage of enemy shells in the dark is pretty appalling . You’ve read of the wrecked villages. Well some of these about here are not wrecked. They are utterly destroyed, so that there are not even skeletons of buildings left. Nothing but a churned mass of  débris, with bricks, stones and girders and bodies pounded to nothing. And forests! There are not even tree trunks left, not a leave or a twig. All is buried and churned up and buried again.
The sad part is that one can see no end of this. If we live tonight we have to go through it tomorrow night and next week and next month. Poor wounded devils you meet on the stretchers are laughing with glee. One cannot blame them. They are getting out of this.

Just before daybreak, an engineer officer out there, who was hopelessly rattled, ordered us to go. The trench was not finished. I took it on myself to insist on the men staying, saying that any man who stopped digging would be shot. We dug on and finished amid a tornado of bursting shells. All the time, mind, the enemy flares are making the whole area almost as light as day. We got away as best we could. I was again in the rear going back, and again we were cut off and lost. We eventually found our way to the right spot. I was buried twice, and thrown down several times–buried with the dead and dying. The ground was covered with bodies in all stages of decay and mutilation, and I would, after struggling free from the earth, pick up a body by me to try to lift him out with me, and find him a decayed corpse. I pulled a head off one man and was covered with blood. The horror was indescribable: 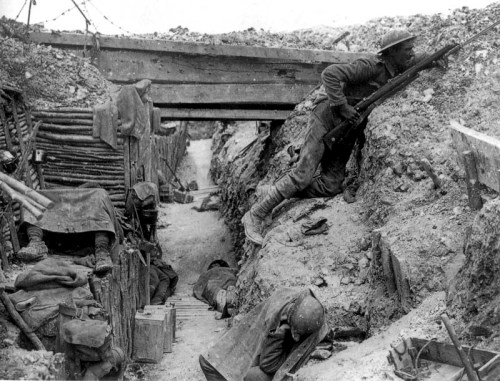 In the dim misty light of dawn I collected about 50 men and sent them off, mad with terror, on the right track for home. Then two brave fellows stayed behind and helped me with the only unburied wounded man we could find. The journey down with him was awful. He was delirious. I tied one of his legs to his pack with one of my puttees. On the way down I found another man and made him stay and help us. It was so terribly slow.

Well, I’ve had my whack and enough to last a life time. I think one could call it a crowded time. Shells—millions of shells, shells all day and all night, high explosives. I want to put somewhere in here that Goldy fell at Pozières, or rather beyond it. Shrapnel, minenwerfers, whizz-bangs, bombs, tear gas shells, gas shells, sulphur shells-and thousands of gaping dead:

The stench, and the horridness of it can but be mentioned. I have sat on corpses, walked on corpses, and pillaged corpses. I got many interesting German souvenirs and could have secured cartloads from their trenches, but I lost most of what I took, and usually was too busy to pick up anything. I lost nearly all my equipment and clothes and with them my curiosities, but I brought back one bonzer souvenir that I did not expect to bring back—myself.

You always told me I would stick it all right, and I did, but I’d give anything to be out of it for good. All of us would. I saw strong men who had been through Gallipoli sobbing and trembling as with fever–men who had never turned a hair before. The fact that it was all so new to me probably helped me enormously. Goldy fell in the first hour, before I even saw him. I reached the same ground next day.

I worry that if we are not careful, we will finish up celebrating the Great War and our eventual victory over the Germans. This collection of Australian letters will go a long way in preventing anybody from making that ridiculous mistake.