Flight Lieutenant John David Fletcher was buried in Cambridge City Cemetery on the Newmarket Road. As well as John Fletcher, four other casualties were buried in this cemetery, the rest being taken back to the cemeteries near to their homes.

The pilot, Flight Lieutenant Henry Stewart van Raalte of the Royal Australian Air Force was one of the four to be buried in Cambridge City Cemetery. Aged just 31, he was the beloved son of Henri Benedictus Salman van Raalte and Katherine Lyell van Raalte. He was the much loved young husband of Mrs Mary Ellen van Raalte. They all lived together in Albany in Western Australia:

Here is Jimmy’s funeral in Cambridge Cemetery. His brother is labelled in the foreground: 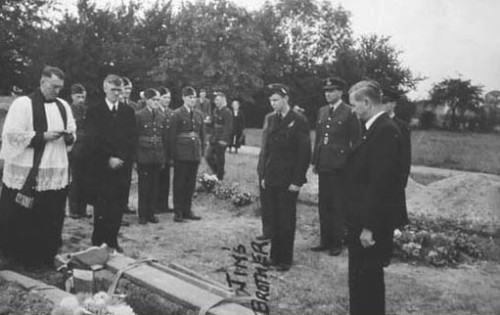 Flight Sergeant Maurice Durn, the Flight Engineer, is buried in the churchyard of St Bartholomew’s Church in Marsden. He was only 21 years of age, the beloved son of Norman and Clara Durn, of Marsden, and the much loved husband of Mrs Dorothy Durn, who lived in the same village in West Yorkshire, seven miles west of Huddersfield.

Pilot Officer David Gethin Williams was the navigator. He was the beloved son of Gwilym and Dorcas Ann Williams, of Blaengwynfi, a village in the Port Talbot area of South Wales. He is buried in Plot T, in unconsecrated ground, in Rhondda (Treorchy) Cemetery.

“My uncle David Gethin Williams was the navigator in Van Raalte’s airplane. My father who was 14 when his brother was killed remembers that it was a sealed coffin that was returned home for burial as they could not be sure if it was David Gethin that was in it. My grandmother was always haunted by that. My father remembers the Van Raalte brothers coming home to Treorchy with David Gethin when they were on leave. The rear gunner Royston George Davies was also from Treorchy and both gravestones are in sight of each other which is very poignant!” 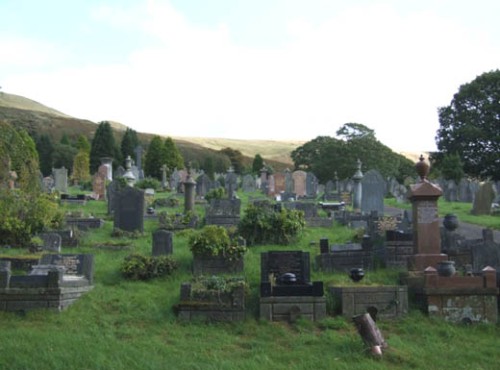 The Bomb Aimer, Warrant Officer Alfred Leonard Lambert of the Royal Australian Air Force was 25 years old when he died. He was the much loved son of John Leo and Rhoda Lambert and the beloved husband of Stella Irene Case Lambert, of Eastwood in New South Wales, Australia.

His daughter, later to marry and become Maree Pollard, was only eleven months old when her father was killed. She said:

“It has always been a big black hole in my life. I personally feel that LARG have done a fantastic job and I just can’t thank them enough. I find it very humbling.”

Maree never met her father, because she was living in Australia when he died. Alfred is buried in Cambridge City Cemetery: 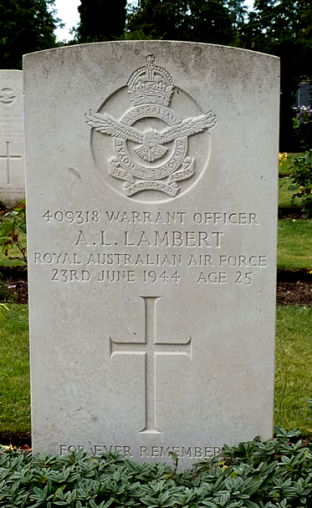 Flying Officer Alan Arnold was the Second Bomb Aimer, He was also a member of the Royal Australian Air Force and was aged just 26 at the time of his death. Alan was the much loved son of Edward and Lillian Evelyn Agnes Arnold, of Pascoe Vale South, Victoria, Australia. He was apparently flying as a visual air bomber. He too is buried in Cambridge City Cemetery.

Flight Sergeant Eric Henry Peace was just 21 years of age. He was the wireless operator, the beloved son of Ernest and Ethel Maud Peace of York. He too is buried in Cambridge City Cemetery.

The mid-upper gunner was Royston George Davies, aged just 22, and the much loved son of Gerildis and Gwenlian Davies, of Treorchy. He was the husband of Phyllis Mary Davies, and they lived in Cwmparc, Treorchy. Just like the navigator, David Gethin Williams, Royston is buried in Rhondda (Treorchy) Cemetery, both graves in sight of each other.

The other Lancaster involved in the catastrophe was ND981, also of 97 Squadron, piloted by Flight Lieutenant Edward Leslie John Perkins:

His friend Patrick Turner, the flight engineer in another Lancaster in 97 Squadron, recounted how the men enjoyed time to let off steam:

“One of the pilots, Flt Lt Perkins, had a small car and the whole of the flight lifted this car onto the top of an air raid shelter. After the accident we had the job of getting it down.”

Only one man was to escape alive from this horrendous collision, everybody else being killed.

Flight Lieutenant Perkins, the pilot, was buried in Cambridge Cemetery, but I have been unable to trace any further details whatsoever about him.

The Flight Engineer was Sergeant Frank Ernest Coxhead, aged 20, of Somercotes in Derbyshire. He was the much loved son of Frank Percy and Martha Coxhead. Frank is buried in Lea Brooks Cemetery in Alfreton, Derbyshire.

The Navigator was Flight Lieutenant William James Hunt who was only 22 years old. He was the beloved son of Sydney Herbert and Maud Adeline Margaret Hunt, of Romford, in Essex . The inscription on his grave in Romford Cemetery reads, “Tranquil you lie, Your memory hallowed, In the land you love.” 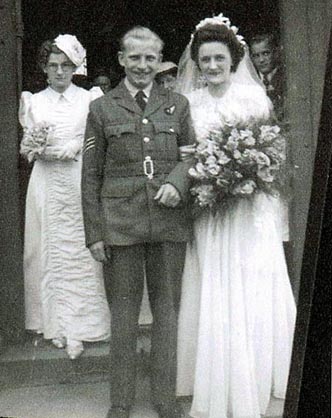 The wireless operator was Flight Sergeant Coman, with the first name John or Joseph, depending on where you look. Of him, more later.

The mid upper gunner was Warrant Officer Denis Gilbert Partos. He was 23 years old, and the much loved son of Francis Ferdinand and Pauline Partos, of Southgate, Middlesex. John is buried in Southgate Cemetery. Denis died without knowing that he had been awarded a Distinguished Flying Medal. The news only came through in the London Gazette on June 27th.

This death may have been the final moment of despair for Francis Ferdinand and Pauline Partos, of Southgate, Middlesex. Their other son, John Emil Partos, a Bomb Aimer with 427 Squadron of the Royal Canadian Air Force, had already been killed on February 27th 1943:

He was flying in a Vickers Wellington bomber which had taken off from RAF Croft at 1848 hours. This was ZL-C with the serial number BK268, piloted by Flight Sergeant  George Taylor. They were one of seven Wellingtons sent to bomb Cologne. Five aircraft returned safely. Flight Sergeant Taylor bombed successfully, but on the way home he crashed at R.A.F. North Luffenham, near Woolfax Lodge, and he, and four of his crew, were killed, including John Partos. Flight Sergeant William Harwood and his crew were also posted missing from this raid. The whole story can be found on the website of the Canadian 6th Group:

What makes these events, back at RAF Coningsby in Lincolnshire, even more tragic and twisted is that Denis Partos was not even a normal member of the crew of this doomed Lancaster. The normal mid-upper gunner was Flight Sergeant M.H.McBride, but he could not fly on this particular day because he was on a charge and had been grounded for his bad behaviour.  So too was the other gunner in the crew, Flight Sergeant J.K.Russell. Flight Sergeant M.H.McBride went on to survive the conflict as far as I can trace. So too did Flight Sergeant Russell. They must have thought, though, that they had used up all of their good luck for the entire rest of the war! Here is the Operations Room of 97 Squadron 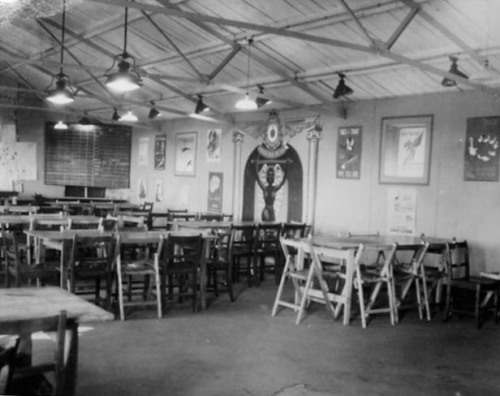 I cannot trace a rear gunner for ND981 on this particular occasion. Some sources give it as John David Fletcher but that is clearly an error. Perhaps the aircraft flew with just six crew members.

The only man to survive the crash was Flight Sergeant Coman who was the wireless operator of Flight Lieutenant Perkins’ Lancaster. Coman jumped out of the stricken bomber as it broke up and managed to get his parachute open. He was badly burned by parachuting down almost into the burning wreckage of the two aircraft. He owed his survival, it is thought, to the fact that he was conceivably blown upwards by the force of the explosion of the burning wreckage on the ground and was, therefore, able to open his parachute and come down safely.

After his almost miraculous escape, poor Flight Sergeant Coman left the squadron and, in actual fact, was to die of tuberculosis not too long after he left the RAF. According to at least one website, he was so traumatised that he was never flew again after the tragic events of Friday, June 23rd 1944. (not surprisingly, you might think).

Old Nottinghamian, John David Fletcher had intended to make his living by farming poultry when he left the RAF.

Sixty years after the tragedy,  at a commemorative ceremony, Roy Sturman, from the Nottinghamshire country village of Collingham, spoke about his feelings all those years ago. He was only ten when his brother-in-law, John David Fletcher, was killed in the crash. He said:

“I thought he was great. He was a hero to me. I’m so glad I came along to the ceremony, because this is history and it needs to be remembered.”

This stained glass window is dedicated to the memory of the brave young men of 97 Squadron:

Needless to say, as I was not a witness to all of these dreadful events, this article could not have been written without using the series of excellent books by W.R.Chorley, and a number of other websites.

The final part of this sad tale to follow in the near future.