Where did those three “merles” come from? Part Three

Last time, we looked at this shield which is that of Thomas Becket also known as Saint Thomas of Canterbury, Thomas of London, and later Thomas à Becket.

Born in probably 1118 or 1120, he became Archbishop of Canterbury in 1162 but was then martyred in Canterbury Cathedral on December 20th 1170 by followers of Henry II, namely Reginald fitzUrse, Hugh de Morville, William de Tracy, and Richard le Breton.

Surely this coat of arms is the easy and direct link with the “merles” of Dame Agnes Mellers?

If you were scared stiff that your husband was on his way to Hell, then what better saint to recruit to your aid than the Numero Uno of English saints, the Head Honcho of martyrdom in England?  As one expert TV commentator recently said, in that original programme (to which, by now, I was giving my fullest attention):

“The most important English saint, by a wide margin.”

I think that Dame Agnes, like so many ordinary football supporters nowadays, did not have her own coat of arms or badge, but instead she was very attached to those of her hero. Not Nottingham Forest or Notts County for her, of course, but Thomas à Becket.

Perhaps Dame Agnes used to display Thomas à Becket’s coat of arms because, as a very pious  and religious person, a vowess of the future indeed, she had  already been on a pilgrimage to see the saint’s tomb in Canterbury Cathedral:

Dame Agnes may have done this on her husband’s behalf or she may have done it because it was what thousands and thousands of English Christians had always done over the centuries. Perhaps in the three hundred and fifty years since Becket’s death, a tacky tourist trade had built up, and Dame Agnes was able to buy her very own copy of the great saint’s shield, which she had then hung up over her mantelpiece for all her friends to see. We will never know, but for me, the visual coincidence between the two coats of arms is quite stunning. Black birds, of course, are not particularly common on heraldic shields. Eagles, yes, but not a great deal beyond that. Everybody preferred lions.

Game set and match for my theory is the coat of arms of Sir Thomas More (1478-1535), the Lord Chancellor of Henry VIII but more significantly perhaps, the second most important English saint, venerated by all English Catholics as Saint Thomas More. When King Henry wanted to divorce the barren Queen Catherine of Aragon in the hope of fathering a male heir with Anne Boleyn as his new, younger, sexier, more fertile and six fingered Queen, Sir Thomas More “steadfastly refused to take the oath of supremacy of the Crown in the relationship between the kingdom and the church in England.”

More would not retreat from his belief in the supremacy of the Pope over the King. He was beheaded on July 6th 1535. Before he died, More proclaimed to the watching crowd, that he was: 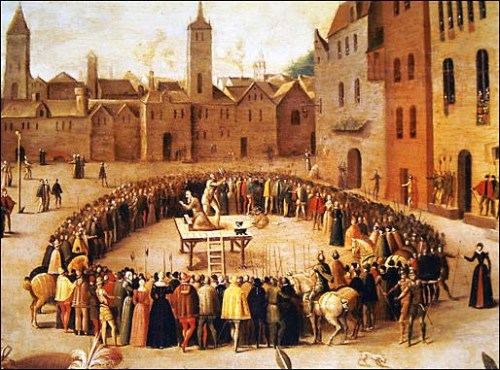 As a young man Thomas had thought seriously more than once of giving up his legal career to become a monk. And now he was a martyr, and well on his way to becoming a saint.

It would be amazing, of course, if his father had had no influence on his growing son. How could the young Saint Thomas have been so pious and so spiritual had his father not influenced him at any point? Clearly, Sir John must have been a very staunch Catholic to have produced a son like Thomas. Here is the only known depiction of Sir John:

That pious father of the saint, Sir John More, was born around 1451 and died in 1530. He was a lawyer and eventually became a judge. As he rose in society, he was offered the chance of a coat of arms of his own. He may have been told of the possibility of having a shield with a striking visual pun. There is an heraldic bird called a moorcock, which is based on the male black grouse, a bird of the high moors, and is characterized in heraldry by its two projecting tail feathers:

An ordinary cockerel has a curved over tail, and in heraldry is really much less desirable, quite often being referred to as a “dunghill cockerel”: 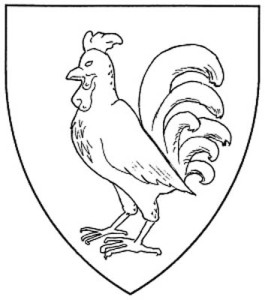 Sir John was left to make his choice. You’ll find out what it was next time.