A Great Bustard in Edwardian Nottinghamshire

Great Bustards are huge birds, more or less the size of a domestic turkey. They used to live in many areas of Merrye Old Englande, as long as there was plenty of open grassland and only scattered farmland. They liked the chalk downs of central and southern England such as Wiltshire,  for example, and the open sandy heaths of East Anglia. The last bird English bird was shot in 1832. This is not him: 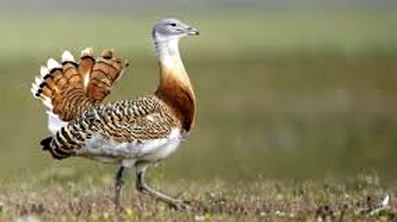 A single Great Bustard  was seen at South Collingham on April 1st and April 23rd to 24th 1906. South Collingham was, I presume, to the south of present day Collingham. The latter village is just to the north of Newark-on-Trent. In 1906, there would have been no electricity cables or pylons. Just open, infrequently visited farmland. The orange arrow marks the approximate spot:

Mr Henry Wigram sent Joseph Whitaker two letters which have survived, and they are kept in the Local Collection in the library at Mansfield:

Dear Sir,
I am afraid you will think me slow in answering your PC (postcard), but I have had some difficulty in obtaining accurate information about the Cormorant, about which I had no note myself:

I can tell you now that it was seen on the Newark Parish Church steeple for nearly two months. If I can hear anything more definite than this I will let you know.

.
I was glad to have your enquiry about the Great Bustard, because most people have simply smiled, & said “What could it have been ? ” ! !

I can positively say I did see one, as I had another view of it nearly three weeks after:

I reported it to “Countryside”, flying over my garden & I believe my wife saw it at about the same time & place on the following day.

The second time I saw it, it was making a noise like an exaggerated Crow’s caw, while on the wing. It was this that drew my attention. On both occasions I was within 120 yards of it: 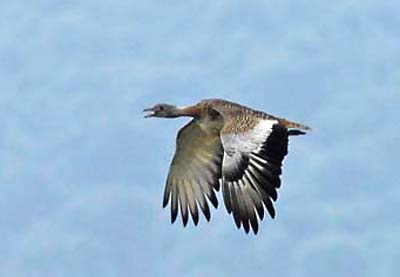 You have perhaps heard of the Snipe & Redshank laying in the same nest at Besthorpe. The Snipe laid first, each laid 3 eggs, from which I saw the Redshank get up. I am afraid I cannot say how many were hatched.

I have a few other notes which seem interesting to me, but they may very possibly be rather commonplace to one with so much more experience, as you have.
Though I collected eggs as a boy, it is only of late that I have really studied birds at all. If you think I could help in any way I should be only too glad to do so, as far as I can. I am often at Retford on business and could come over to see you if you wish. After all, I have heard of Rainworth from my friend Bonar, who went to see you with the Wordsworths last year, there can be few more interesting places anywhere.
Yours truly,
Henry Wigram

PS:    I am sorry to find I addressed this wrongly, and it has been returned to me.”

Dear Sir
Thank you for your Postcard. Since writing you I have seen a coloured plate of a Great Bustard, & find that it entirely corresponds with my recollection of the bird I saw, but I noticed, as you say, that the bird looks much whiter on wing (sic) than with its wings closed:

At the time I saw it, the bird appeared to me to resemble a Turkey more than anything else I could think of. Its colouring was white & brown, not brown & grey.
I put its stretch of wing roughly at a yard and a half, and found afterwards that my man, who was with me on both occasions, guessed it at the same measurement:

I first saw it on April 1st, again on April 23rd. My wife is also certain that she saw it on April 24th.
I had field glasses in my pocket the first time, but the bird, which when I first saw it, was in the act of rising from the ground in a grassfield – disturbed by other people passing, (who did not see it) – though at first it did not appear to be flying fast got away so quickly that I could not get the glasses on to it:

I was much struck at the time by the pace at which it flew with comparatively slow beats of the wing.
On the second occasion the bird passed right over my head at a height of, I should say, 50 to 60 feet.
This was in the evening. The following morning my wife saw it taking exactly the same line of flight.
I sent word to Gates at Besthorpe on 2nd April that this bird was about, but he was ill & could not look out for it. However a Besthorpe man told him that he had seen a large strange bird about that time:

My father also saw a large bird he could not identify near the same date, but he did not get near enough to it to give any particulars.
I should very much like to come over to Rainworth as you kindly suggest. Would Friday the 20th suit you, & if so at what time?
I saw a bird the other day which puzzled me completely:

It was the size and shape exactly like a Tree Pipit, but it had pink legs, & the markings on the throat were darker (almost like those of a  miniature French Partridge , & did not extend so far down the breast as in the case of a Tree Pipit. It also seemed to have a dark mark around the neck.
Would it be possible for strong sunlight to deceive one in this way? There were Tree Pipits about the place at the time.
Gates was with me, & quite agreed as to the markings.
Yours very truly,
Henry Wigram

In his own copy of the Birds of Nottinghamshire, Joseph Whitaker has written:

“I may add that Mr Wigram is a keen and careful observer of birds and a good field naturalist, and I am perfectly satisfied that it was a Great Bustard he saw.”