On Wednesday, April 22nd 2015 at 1.00pm, yet another High School Sports Day will begin. A couple of years ago, I was fortunate enough to purchase, in an online auction, the aging programme which was sold (not given away, as they are now) to spectators who turned up at the School Ground in Mapperley at 2.30 pm on Wednesday, April 5th 1930. The programme was priced at 3d, which is around 2p in decimal money. We have already seen the long walk along Mansfield Road to the sports ground. Look for the orange arrow. The High School is in the bottom left corner of the map, near the meeting point of Mount Hooton Road and Forest Road East. The school is the incomplete beige rectangle which is outlined in black: 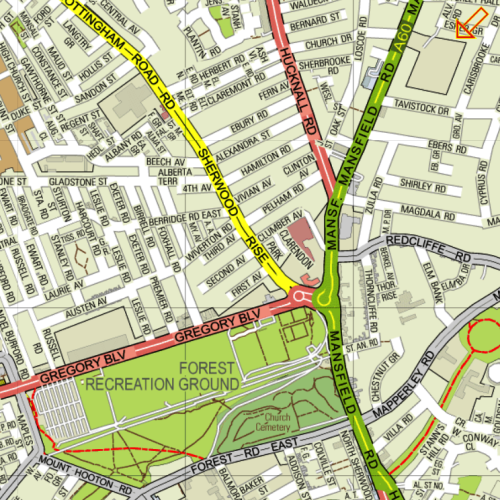 I found it extremely difficult to scan this aging document. I have therefore divided it into a long series of smaller scans where, hopefully, all of the print will be large enough to be legible. An unknown parent has gone through each event and added the order of the finishers, and, in some cases, the performance they achieved. I taught at the High School for almost forty years, and how familiar are some of the boys’ names! I suspect that they may have been the grandfathers, or even great grandfathers of some of my own erstwhile pupils.
Here is the top of the front cover. The school badge is the same as nowadays, and so is the Latin motto. What I do not understand, though, is the presence of two swastikas. And they are proper swastikas, right-facing ones and not Hindu good luck symbols or badges taken from the horse bridles of the Lakota Sioux. And I don’t know why they are there. Perhaps the event had a secret sponsor: 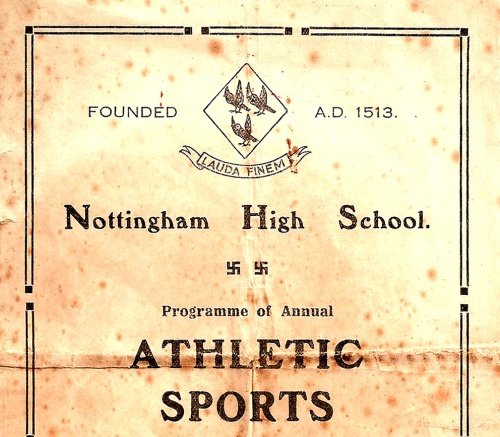 This is the bottom of the front cover. Three pence from so many different spectators must have been a nice little earner: 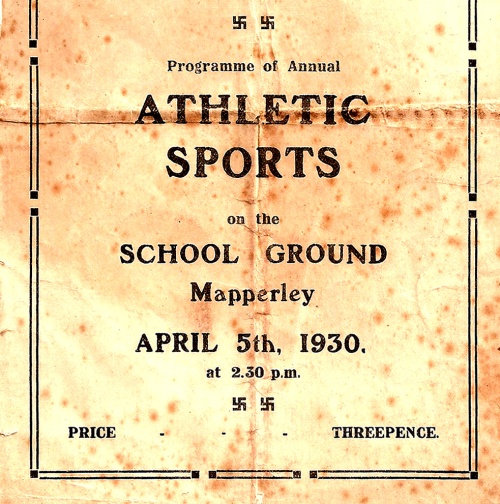 Here is the second page, with the  names of the two track judges. Nowadays there are twelve of them. but in 1930 things were a lot more sedate. The Brewills were a family with at least two famous athletes (G.F. and G.W.) who, in the latter years of the Victorian era, had both achieved a number of triumphs at national level in both sprinting and hurdling . A.S.Brewill had been the commander of the 7th Sherwood Foresters throughout most of the Great War. Almost thirty years previously, on the afternoon of Saturday, July 25th 1903, our current track judge, E.Brewill, had participated in the School Sports held at the same venue. Along with G.F.Brewill, he had been a member of “The Past” (Old Boys) tug of war team against “The Present” (Masters and Boys). The latter were a team of  three boys, namely R.Marrs, W.Oldershaw and H.A.Watson, and three masters, Messrs Hughes, Jones and Yates. The Old Boys soon pulled the School over the line, but were found to have included a seventh member of the team, J.Johnstone. (Cheats!!!) The result was overturned, and the School soon won a fair contest by 3-0. (Hurrah!)
Tinsley Lindley was a very famous figure in High School history and in the history of Nottingham itself. He will perhaps warrant his own blog post one day: 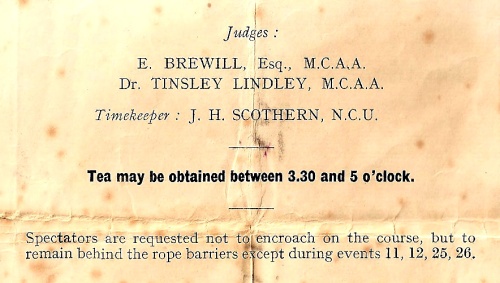 I have been unable to find any background information about J.H.Scothern, although there was a “Scothern” who played amateur football internationals for England before the Great War. As a frequent team mate of the High School’s Olympic Gold Medal winner, Frederick Chapman, both for Oxford City and for England, he would certainly have known him, and probably Tinsley Lindley as well. This bottom half of the page, with its list of House Colours, attests the presence of boys from both the Main School (the four on the left) and the Preparatory School (the four on the right):

Here are the first two events, with winners and times, the latter expressed as fractions (much more of a challenge than those silly decimals): 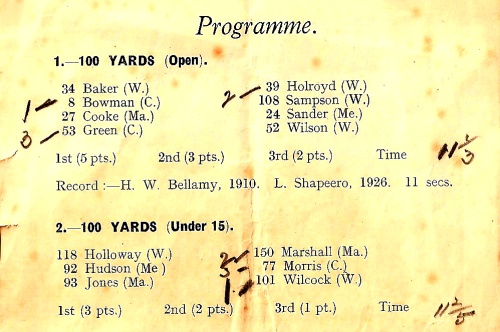 H.W.Bellamy was a misprint. It should be H.W.Ballamy. Even here, more than ten years later, the Great War’s foul tentacles stretch out. Harold Ballamy came from a poor family. His father was a commercial traveller. Harold won many school prizes such as Silver Medals for Mathematics and Science, and Dr Gow’s Prize for Geometry. He was Captain of Football, Secretary of First Team Cricket, the School Librarian, the Colour Sergeant in the Officer Training Corps and the Captain of the School.
At Cambridge University, he won the Bishop Open Exhibition for Natural Science. He obtained a First Class Degree in Mathematics. He then changed to Natural Sciences, where he was placed first in the whole University of Cambridge. What more ideal choice, what better qualified man, to put in charge of a pile of mud near the village of Passchendaele ? And then he was killed: 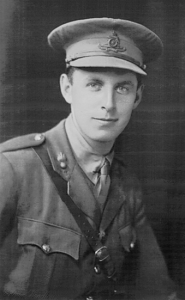 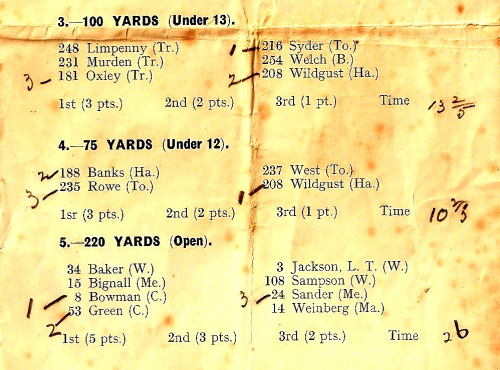 And I have taught a Sharman and a Lawrence. I wonder who the latter was related to. And why don’t they have “Throwing the Cricket Ball” any more? Health and Safety, I wouldn’t wonder: 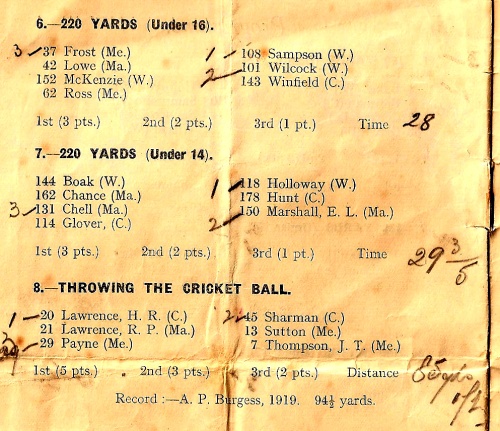 Notice that the High Jump was an Open Event with no age restrictions. I think the pencil mark means that the winners both achieved equal heights: 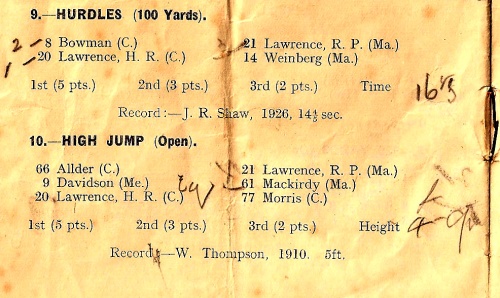 And here are the next events, except that another foul tentacle reaches out and grabs another victim. Captain Frederick Cuthbert Tonkin lived at 13 George Road, West Bridgford. He represented the High School at football, cricket and athletics. He interrupted his Dentistry studies at Guy’s Hospital to enlist and was killed on November 4th 1918, only seven days before the end of the war. He was just 24 years old: 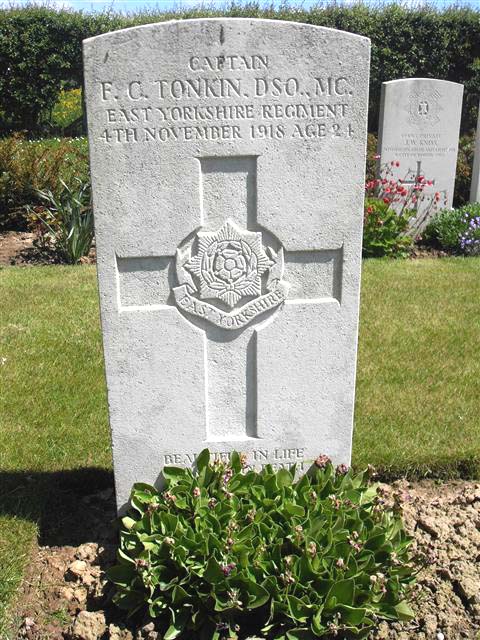 There were two long jumps, sensibly based on height, rather than age: 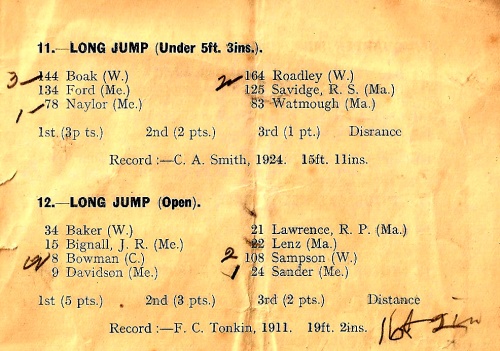 Why don’t they bring back the Sack Race? H.C.Wesson, by the way, had been Captain of the School in 1928: 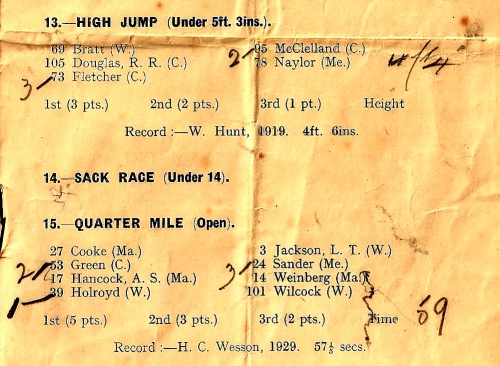 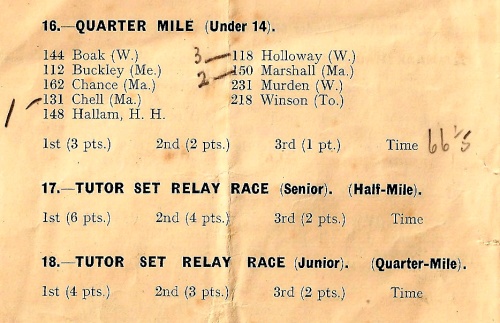 Another Open Event, with no age restrictions:

An obstacle race. Much more fun than boring old athletics! 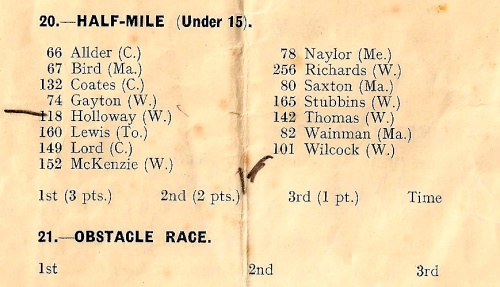 And another Sack Race. You can’t have enough of them, I say. Have you noticed how the parent has gradually began to lose interest. Fewer pencil marks. Fewer performance times. 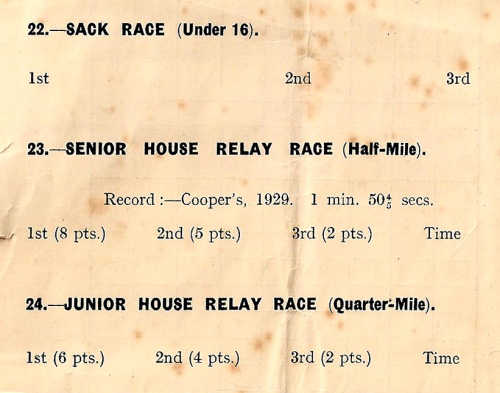 Two more tug of wars. Or should that be tugs of war? Or just tugs? Sounds like fun for everybody, though. W.H.B.Cotton was a hero, a genuine hero, as well as a record holding athlete. Spending his holidays in Glamorgan in Wales in 1928, he had managed to rescue two sailors from a ship which was sinking, just offshore from Porthcawl: 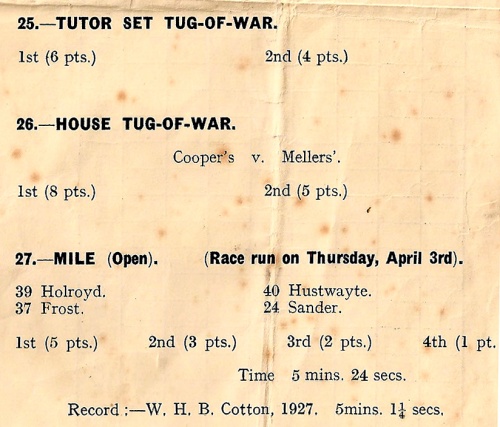 The back of the programme is a grid where all the keen and interested parents can keep the inter-house score, event by thrilling event: 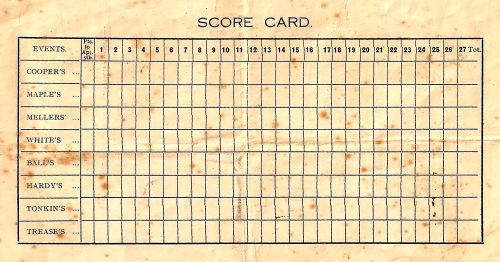 And that’s it! The Annual Athletic Sports were over for another year. And, indeed, the days of holding them at Mapperley were over for ever. The Valley Road Playing Fields had been purchased for £5.600 in 1929. The ground had been levelled, the marsh had been drained and they were ready for athletic action by Thursday, April 30th and Saturday, May 2nd 1931. But that, as they say, is another story.