Builders and plumbers transform the house

Last week we had the builders and plumbers around to our house to put in a new central heating system. At first it felt exactly as if the whole building had been hit by a tsunami. Not quite as dramatic or as destructive though as this one…

The problem was that every one of the six men was armed with his very own Mjölnir, his very own Hammer of Thor, with which he was capable of sending thunder echoing round the house whenever he felt like it.

In actual fact, it was more that the jobs they had to do in the first couple of hours were by far the noisiest of the entire four days. Believe me, a dining room is no is no place for a pneumatic drill.

In 2013 we had the same company come round and put a multi-fuel stove in our living room. We were sick and tired of the money guzzling gas fire, to which the only other solution was to switch on the central heating for the entire house.  Here is our first stove which was put in last September. 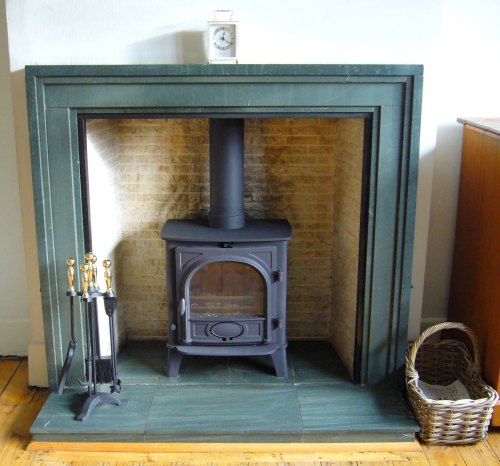 Over the course of the winter therefore, we lit our new multi-fuel stove in the late afternoon, and after feeding it sparingly with coal for the evening, we then discovered that it would then keep the room pleasantly warm for the whole night and for much of the next day. In addition, it also kept the bedroom above equally lovely and warm. Only very infrequently were we using the central heating.
We soon realised that having a second stove fitted in the dining room at the back of the house might have the same effect and save a great deal more money. So, as well as having our central heating revamped, we were having a second stove put in.

In the dining room, we had a ten or fifteen year old gas fire. It always seemed to remind me of somebody, perhaps a character out of Wallace and Gromit.

First of all they removed the gas fire. Here is just a small selection of the rubble that the builders created. Notice though, that it is neatly put into special plastic buckets, so that nothing whatsoever remained at the end of the day. 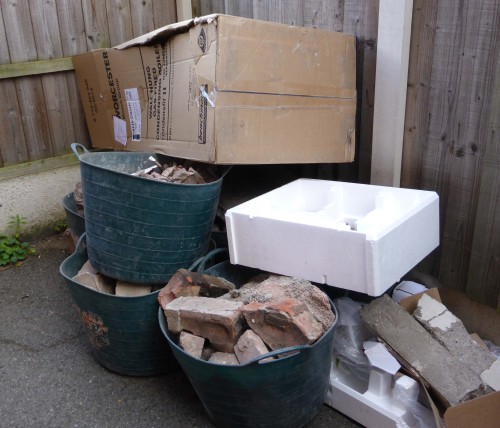 Here is the old gas fire, and the old radiators, gone for ever…

The majority of the old radiators had to go. They had been there since probably the mid-1960s. Here, plans are being laid to put the new boiler in the bathroom where an old cabinet had been. 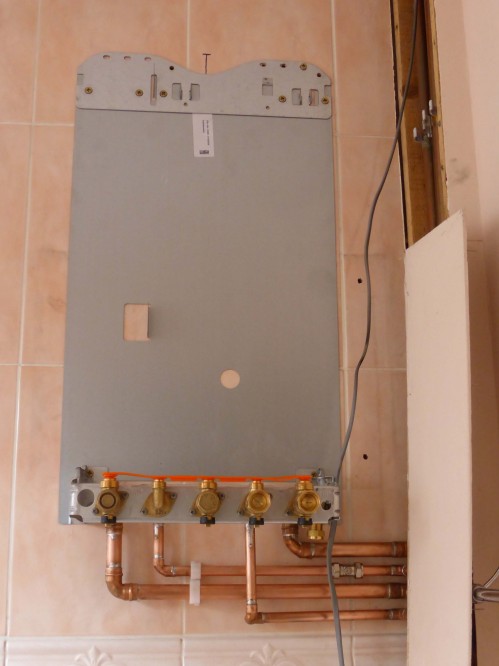 In the loft, the old boiler had come to the end of the road. The fat lady really had sung for the last time. 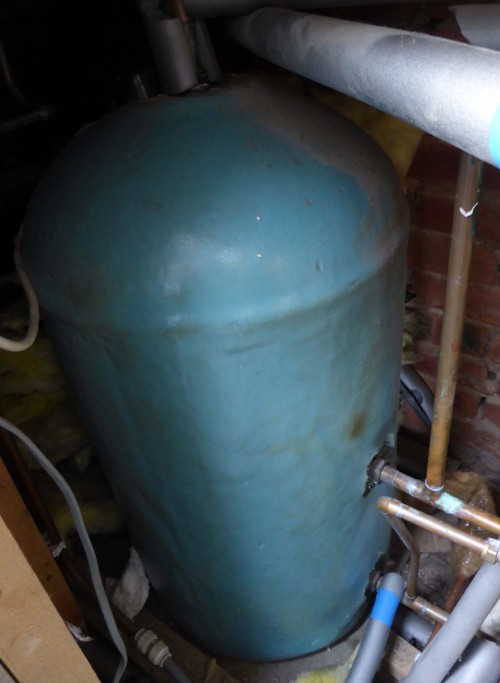 Unfortunately, here and there, the wallpaper will need repair, but there are very few things that a Pritt stick will not be able to remedy. In actual fact, in some places, a number of different layers of wallpaper were revealed.

The top pale green one, I think, was our responsibility but the green leafy pattern looks to me to be either 1940s or 1950s, and the relatively bright coloured wallpaper to its left dates from the more optimistic days of the 1980s.
Here you can see not only Mjölnir, the hammer of Thor, but also the pneumatic drill which caused all the scariest noise for the first half hour or so.

The chimney had to be inspected. Would an eighty year-old chimney be up to the job, or would it require extensive and expensive repairs? Well, what do you think? 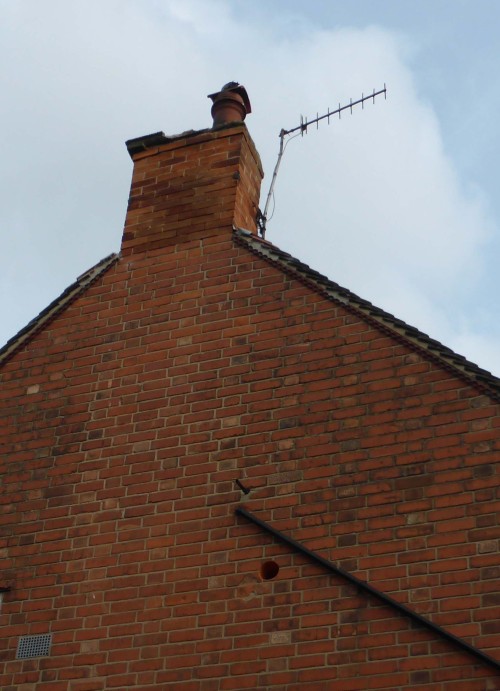 This hole, drilled in the bathroom wall for the new slimline boiler, gave a view over the garden which could be enjoyed for only twelve or so hours in nearly eighty years.

The princess of boilers is now in place.

Meanwhile the new fireplace will need some imitation bricks. The builder works so fast his trowel is just a blur. Behind him is the Safety Superintendent. 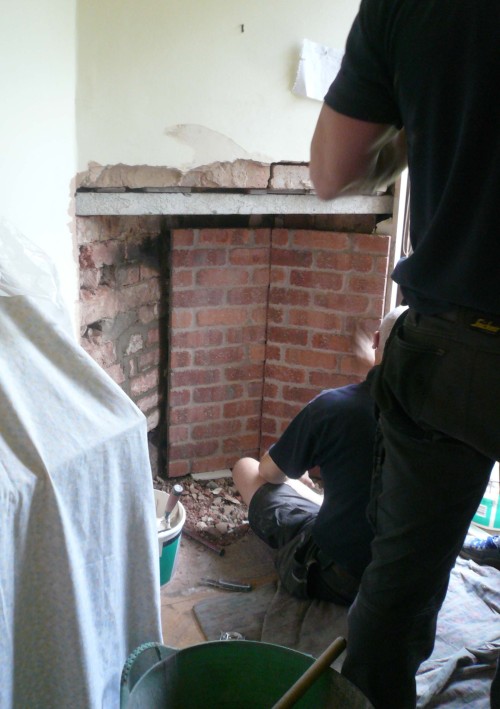 At last everything is ready. The stove is connected up. And then, the all important test firing.

All those lovely warm happy flames. I do so love flames and lovely warm fire. Flames and fire. Fire and flames.

In the loft, originally christened “Ice Station Zebra”, there are now two radiators, one of which unfortunately takes up four shelves of what would have been my CD collection. I will have to look very carefully at where I can put my Captain Beefheart, Steve Harley and Cockney Rebel, Klaus Nomi, Jefferson Airplane and my Procul Harum. 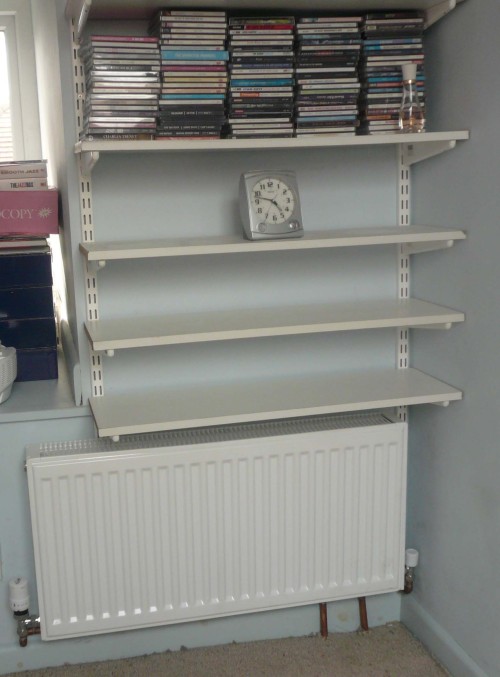 With two radiators now though, there will be no repetition of that unfortunate business with the polar bear.
In the bathroom, there is yet another radiator. It will now be impossible for me to put my Stahlhelm on and re-enact “Showering Facilities on the Eastern Front”. 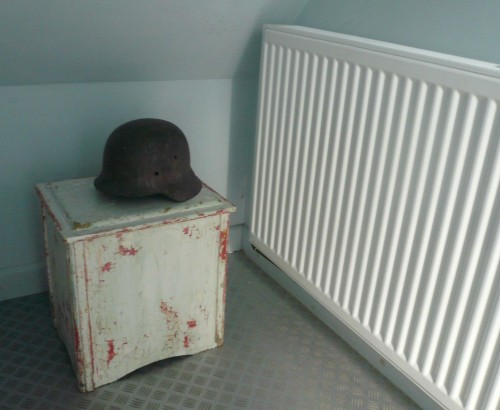 Best of all though, is the fact that I took advantage of all this building work to have a new, much more powerful shower installed. No more problems now with having to wash like this…

Every single morning now, I’m in the new shower just like this.