Here’s the emergency from last time:

And here’s the situation:

The proverbial has hit the fan. A deep, fast flowing river. A rally car in mid air, about to plunge into its surging, ice-cold waters.

So, not a good situation. The water will easily submerge the car, but the water pressure on the doors will be too strong for the men to open them. How will they escape?

And page 2 says that the solution is:

“Your first reaction might be to keep the water out. But this would be fatal. You would quickly use up the oxygen inside the car and suffocate. The only solution is to take a deep breath, wind down the windows to allow the water in, so that the pressure of the water inside will be almost equal to that of the water outside. Then the doors can be opened for you to escape.”

Just don’t try any of this in an Austin Allegro, though, because the percentage rates of success in the “Window Lowering” section of this “Star Car of 1975 Competition” were actually very low. After all, Merseyside Police were officially ordered by the Chief Constable never to jack the car up because the car’s chassis would immediately be twisted and permanently deformed by the vehicle’s weight.

Don’t try it in a car with electric windows either. Presumably in a top of the range luxury saloon, you will all die.

In the comic’s illustration of the “Dilly of a Pickle”, the car looks like an ordinary Ford Cortina, but is probably not. In the 1960s, there was a very popular racing and rallying variant of the Cortina, fitted with a Cosworth engine, called a “Lotus Cortina”. It was usually white with a green stripe and a Lotus Badge on the rear wing:

The smug car behind, driven by Dick Dastardly, is a very popular and successful rallying car, the Saab 96, the model used by the Number One Man, Swede Eric Carlsson. Here he is, one of the absolute masters of the commute to work: 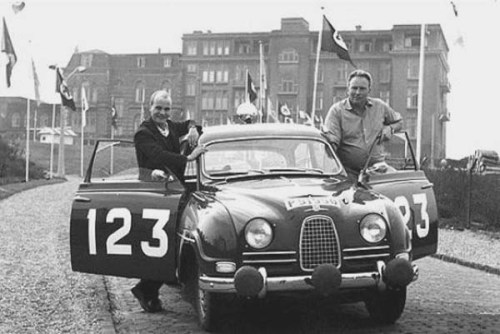