By 1941, inspired no doubt in part by the exploits of “The Few” in the previous year’s Battle of Britain, Fred had made up his mind to join the RAF. To do this, he had to walk to the recruiting office in Derby, a journey he had made so many times before with his father to see Derby County play football at the Baseball Ground:

Fred duly arrived at a two storey building in the middle of  Derby, where all three of the services were busily enrolling volunteers.

As he walked in, Fred was immediately offered a commission as a Second Lieutenant in the Sherwood Foresters, but he refused this generous opportunity and continued on up the stairs to the RAF. Here, he was asked to spell two words correctly, and he had passed their entrance examination. The words were “horizon” and “bicycle”. Fred was now a proud member of the RAF, an organisation which most of the population believed were “the cream of the nation”. He would wear this for the best part of five years: 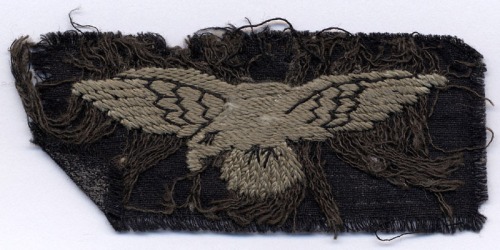 When Fred returned home, he told his parents what he had done. His father congratulated him on his bravery, but his frightened mother slapped his face, and said “You wicked boy!”

Not everybody saw it in such a negative way. In October 1941, Fred was still working in Swadlincote at the office of Bert Orgill, a local business man, when Colonel Guy German from nearby Ashby-de-la-Zouch called round, and asked about him, perhaps even seeing Fred as a likely recruit for his own regiment.

Mr Orgill said that Fred had recently volunteered for the RAF, and Colonel German generously gave him a five pound note for having done so. Eventually, Fred would look like this:

At this time, as was briefly mentioned above, the RAF was considered to be the élite force of the three, a fact which was strongly emphasized in the personal letter sent to every man who joined the RAF by Archibald Sinclair, the Secretary of State for War. He said that

“The RAF demands a high standard of physical fitness and alertness, and I congratulate you on passing the stringent tests”.

“The honour of the RAF is in your hands. Our country’s safety and the final overthrow of the powers of evil now arrayed against us depend on you and your comrades.”

Perhaps as a direct result of this generous praise, there were so many volunteers for the RAF that young men were often sent away for up to a year or more, until a place on a suitable training course became available. This may possibly have been what happened to Fred, although, at this late stage, we have absolutely no way of ever knowing the truth, as his RAF records are far from exhaustive, shall we say!

Nobody of Fred’s social class had ever done any flying. Few had ever been inside an aircraft. Hardly any could even drive a car. To have volunteered for the RAF, and to have been accepted, no matter how low he said their standards of spelling may have been, must have suffused him with immense pride. In this, of course, he was not alone. Thousands of young men across the entire nation had read books and magazines about aviation throughout the 1930s and now, as they reached their early twenties, they were only too willing to join the youngest service: 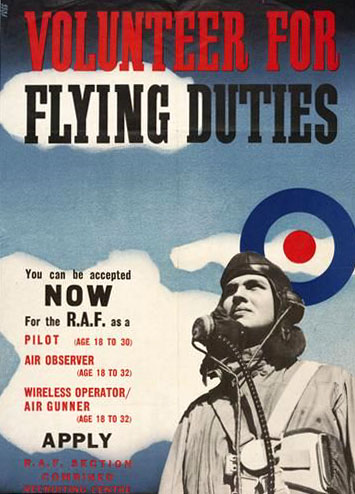 We do know that when Fred volunteered, he was within just a couple of months of his nineteenth birthday. At the age of eighteen, he still had the right to choose which service he entered. Had he waited those last two months, until he was nineteen years old, the government would then have had the right to conscript him, and he would have lost the right to decide in which arm of the services he was to serve.

It is, however, actually possible to disprove one apparently neat theory, namely that Fred, as a keen cinema goer, might well have been inspired to join the RAF by seeing a famous documentary film, which he would talk about ceaselessly in later years. It was entitled “Target for Tonight”. 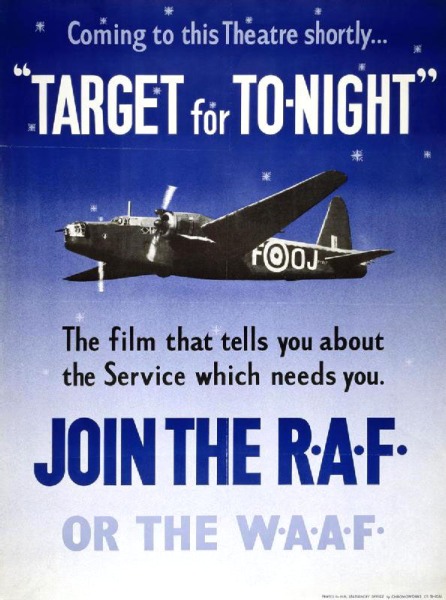 “Target for Tonight” was a Crown Film Unit propaganda film, using real RAF personnel throughout and chronicling a night raid on Germany by the Vickers Wellingtons of 149 Squadron of Bomber Command, with, coincidentally, “F for Freddie” as the main aircraft. It is a nice idea that Fred was inspired to join the RAF by seeing this film but it cannot be true, as the film was not released until at least October 1941, almost a full month after Fred volunteered.  He still spent the rest of his life as an enormous fan of  Charles Pickard, the hero of the film: 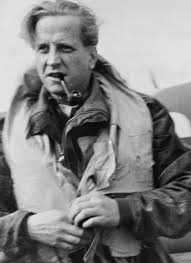 One thing that Fred was always to joke about, however, was the immediate impact that his joining the Allied Forces was to have on the conflict. Montgomery’s victory over Rommel at El Alamein followed his enlistment reasonably quickly, and not long afterwards, the Soviets were to win the Battle of Stalingrad.

You can watch “Target for Tonight” here: