“What would you do ?” used to appear on the cover of a boys’ comic called “Boys’ World”. This was a publication, obviously, aimed at boys and first appeared on January 26th 1963. There were 89 issues before the comic was merged with Eagle in 1964. The last issue of “Boys’ World” came out on October 3rd 1964.

I used to buy “Boys’ World”, and this was mainly for its front cover which always featured a kind of puzzle. It was called “What would you do ?” and was based on somebody being in what Ned Flanders would call “A dilly of a pickle”. Here’s the situation: 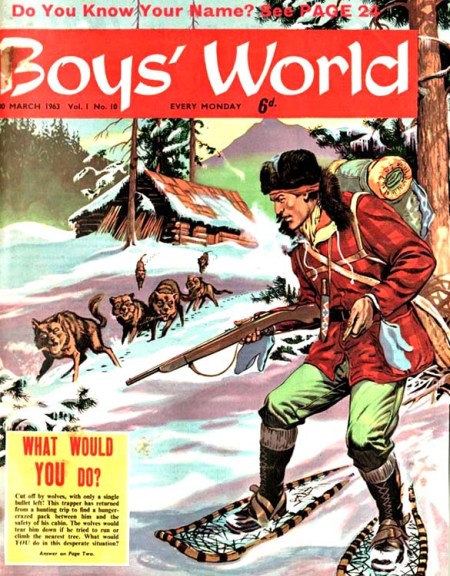 The yellow box sets the scene, and the task is for you to solve the situation. Perhaps you might like to write your idea in the “Comments” section. 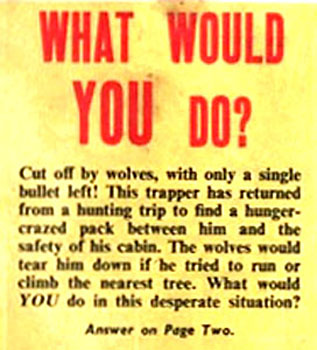 I hate snow. It always makes its way into your clothes and then melts. That, though, is the least of Trapper Jacques’s problems. He has been cut off by the wolves, at least six of them, and he only has a single bullet left. They are hunger crazed after the fish-and-chip van broke down and they stand firmly between Jacques and his lovely little cabin with his new Liberty curtains. If Jacques tries to run they will chase him and bite him and then tear him to pieces. The same fate will eventually befall him if he tries climbing that tree in the background.