A second episode of blood soaked murder in the history of the old Free School was published in a series of “Reminiscences”  in the High School Magazine in December 1929. They came from Mr John Braithwaite, of Bournemouth, who, at the time, was thought to be the School’s oldest Old Boy….

“I went to the old Grammar School in Stoney Street about Midsummer,1857, and left at Midsummer, 1862. The Rev. W. Butler was Headmaster.”

“The old building was very unsuitable, dull and cheerless. The upper school consisted of one large room and one small classroom. There were no cloakrooms or conveniences of any kind, and the sanitary arrangements in the small playground were most primitive.” 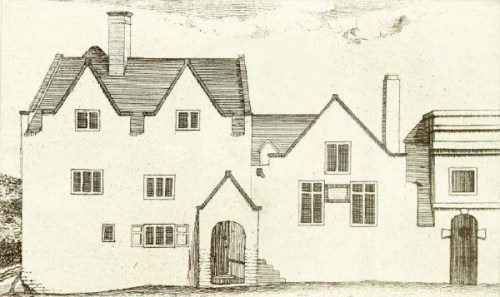 “The whole building sadly wanted painting, but no money was spent; the reason given was that the Trustees were saving up to have enough money to build a new school.”

“We began work at 8 o’clock and finished at 5 o’clock, or later, with two hours’ break at midday. In winter we had to use candles… “long eights” I think they were called. One candle was allowed between two boys, and lighting them was the signal for all sorts of play. We amused ourselves by blowing the candles out and in again, making a nasty smelling smoke.” 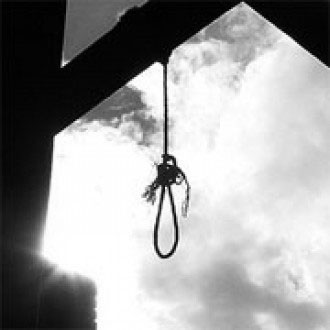 “About the autumn of 1859, a man was sentenced to death in the Nottinghamshire Courts for a murder in the northern part of the county.

Our headmaster, the Rev.W.Butler, as Chaplain of the County Gaol, was required to read the burial Service at the execution, which was fixed for 8 o’clock one morning at the County Gaol in the High Pavement.”

The main building on High Pavement, which dates from 1770, is quite imposing. The Normans were the first to use this site, appointing a Sheriff to preserve law and order in Nottingham, and to collect taxes. The oldest written  mention of law courts comes in 1375.

The cells are below street level. They date back to at least 1449. 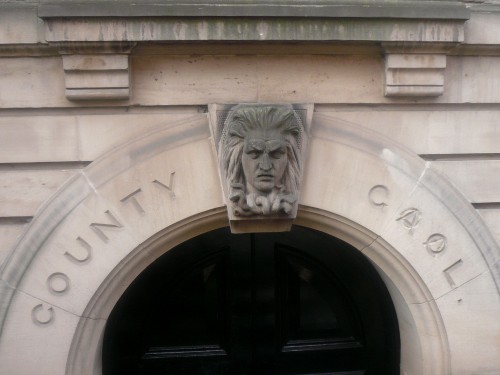 The scaffold used to be erected on the steps in front of the brown columns. There are special square holes cut in the stone steps to hold the wooden beams. They are still there to this day. 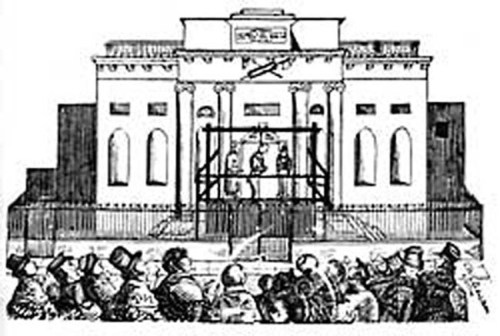 The dead hangees were buried in unconsecrated ground around the back of the building, their feet disrespectfully pointing towards Jerusalem.

“As usual we were at our desks at 8 o’clock on that particular morning, but the headmaster was absent. We all knew where he was, and each of us was thinking of him and visualising the dreadful scene which was being enacted only a short distance away. Back in school, the Deputy Master read prayers, and we waited, silent and awed. Presently the door was burst open, and poor Mr.Butler, with face white and drawn, stumbled in and staggered to his seat, almost spent. After resting awhile he stood up and said, “Boys, I have just come from….” and then he broke down. After recovering himself, he began again, and then he preached us a more impressive sermon than I have heard from any pulpit. As no one was in the mood for lessons we were sent home for the day…” 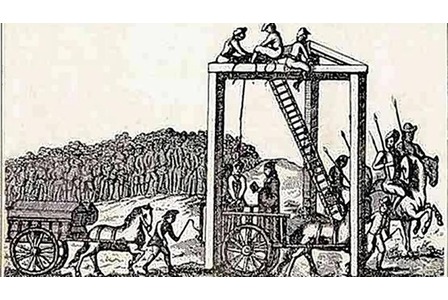 The hanged man was one John Fenton, a blacksmith and publican, executed at the age of thirty-seven for the murder of Charles Spencer at Walkeringham on March 6th 1860. This was a public execution, held on the front steps of what is now the Shire Hall in High Pavement.

The crowd, however, was a lot smaller than expected. This was because, even though it was fourteen years previously, the last public hanging in Nottingham had resulted in the crushing to death of seventeen people, almost all of them children.

Given this blood soaked past, it is no surprise to find that the Galleries of Justice have a plethora of ghosts. On some wet Tuesday afternoons, there can sometimes be as many ghosts as living tourists. Here is a selection of the ghosts I saw on my own visit… 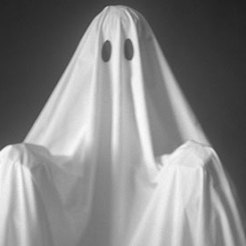