A very long way from home

If you cast your minds back what seems now a very long time, my continuing researches about the German bomber shot down in St.Just in western Cornwall on September 27th 1942 , had led me to the cemetery in Penzance:

Of the seventy one Second World War burials in this cemetery, the grave of one particular sailor is very noticeable, because he lies such a very, very, long way from his home.

His name was Earl William Graham. Earl was an Able Seaman in the Royal Canadian Navy Volunteer Reserve (R.C.N.V.R): 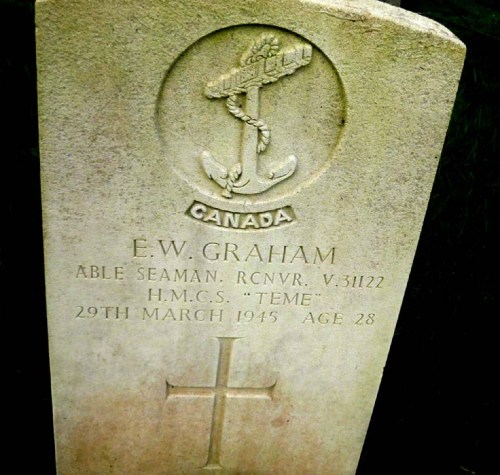 Earl was born in 1917, the son of Arthur John Graham and Gertrude Graham. He was the husband of Regina Graham, of Preston, Ontario, Canada: 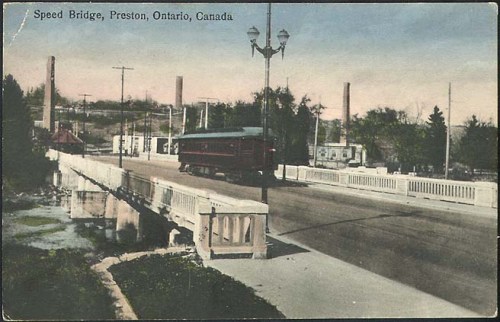 Earl Graham, aged just twenty eight, was serving on board H.M.C.S. Teme (K 458) not far off Land’s End, in position 50º07’N, 05º45’W. At 08.22 hours  on March 29th 1945, just six or seven weeks from the end of the conflict, the warship was torpedoed by the German submarine U-315. The Teme was hit in the stern and the rear sixty feet of the ship was blown off.
Three sailors were blown into the sea by the explosion, and poor Earl Williams was killed outright. The Teme might well have been thought, perhaps, an unlucky ship. It had already been the apparently jinxed victim of a significant collision, when an aircraft carrier struck her amidships in the Bay of Biscay in June 1944. The Teme only just avoided being sliced completely in half:

The “Teme” had been escorting the convoy BTC-111 off Land’s End. The Canadian warship had been “sweeping” to the rear of the convoy of merchant ships when it was attacked. Debris was flung some fifty feet into the air, and one man, later ascertained to be the unfortunate Earl Williams, was blown from the quarter deck up onto the after gun deck. He died moments later from his injuries. The three other seamen were never seen again, although they were initially posted as “missing in action”.
My internet researches have revealed their names as Gordon Walter Bolin, Thomas Joseph Hackett and Robert Everett Rowe. Thomas Hackett’s body was eventually found and his remains are buried in Falmouth Cemetery in Cornwall. Gordon Bolin and Robert Rowe, sadly, were never found, and their supreme sacrifice is commemorated on the Halifax Memorial, along with 2,842 others.
On this occasion, it took twelve hours to tow the mortally stricken “Teme” to Falmouth in Cornwall but the ship was so badly damaged that it was declared a Constructive Total Loss (CTL). A legal definition of the latter is…

“Insured property that has been abandoned because its actual total loss appears to be unavoidable, or because it could not be preserved or repaired without an expenditure which would exceed its value.”

The “Teme” was a Frigate of the River class, with a tonnage of some 1,370 tons. It had only just been completed in 1944 at Smith’s Dock Co Ltd, South Bank, Middlesbrough, in the north east of England. The ship was decommissioned and returned to the Royal Navy on May 4th 1945. They sold it to be broken up for scrap on December 8th 1945. So far researches are ongoing but the names of at least eight people serving on the ship are known:

The U315 operated with a grand total of some thirteen different Wolfpacks during its career, in some cases for just a few days. Their names included Blitz, Donner, Grimm and Panther. Launched at Flender Werke AG, Lübeck  on May 29th 1943, the U-315 went on eleven different patrols, and was commanded throughout by Oberleutnant Herbert Zoller:

The submarine surrendered at Trondheim, Norway on May 9th 1945. The craft was declared unseaworthy. and cut up for scrap on site in Norway in March 1947. I have been unable to trace any photographs of the U-315, but here is another Type VIIC U-Boat, the U-995, currently on display at the Laboe Naval Memorial near Kiel. Do not fail to click on the link to the German website, and make sure that you try the Panorama views. They are guaranteed to scare you (top of the tower) or make you very seasick indeed. Just look for the three yellow-orange circles on the photograph:

The U-315 did not suffer a single casualty throughout its fifteen month career, and sank only two ships, the Teme and the Empire Kingsley, a merchant vessel of just under 7,000 tons:

I would highly recommend this website about U-Boats. It has a vast database of the more than 80,000 people who were in the crews of ships attacked by U-boats, as well as the most astounding detail about the U-boats themselves. I was also strongly attracted by the “U-boat of the Day” feature (bottom left).