The Beast of the Vosges

The Beast of the Vosges is a fairly recent monster to rampage through the French countryside and it has a very different flavour from the Beast of Gévaudan, the Beast of the Cevennes, the Beast of Trucy or the Beast of Sarlat. Its victims, for example, were not human beings but rather livestock, much like the modern monsters of the USA such as the Grassman of Perry County, Ohio or the Devil Dog of Logan County, West  Virginia.

But first, some geography. The Vosges are in the east of France:

They are mountains which are much lower than the Alps and they do not have the same snow capped peaks. They are more rounded, with conifers and moorland: 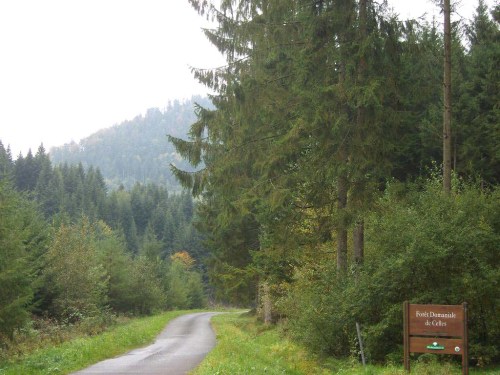 While not a top tourist destination, the Vosges are famous for their savoury cuisine and their beers, both of which look towards Germany and the east for inspiration.

For the Beast, once again, I will look at a number of French cryptozoological websites and you can take your own average between them. “Vampire Dark News” says:

“The “Beast of the Vosges” is one of the favourite topics of discussion for residents of the local cafés. Everyone remembers the ravages of this strange creature from 1977 to 1988.(these dates differ from other sources).  It killed more than 300 animals, between Epinal and Bresse (an area of over 150 square kilometres).  Poultry houses were attacked, horses were injured, at least 200 sheep were slaughtered … but there were no attacks against human beings. 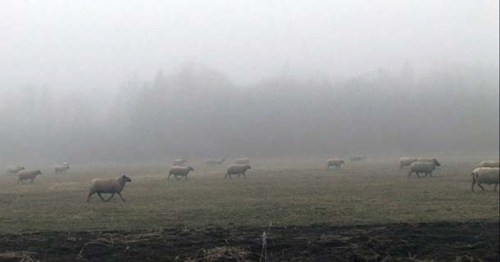 The animal would disappear only to reappear later and begin its misdeeds all over again. Was it a wolf?  A rabid dog?  Several stray dogs?  An animal trained to kill?  The mystery was never solved because nobody ever managed to get a really good look at the beast, neither hunters nor the police nor the military despite 26 hunts being  organized to kill it.  The Beast was able to avoid all the ambushes and all the traps.  Shot at several times from fairly closely range, the animal was never wounded or identified. The only conclusion was that it was some sort of canid.  And because of this, stray dogs were killed everywhere.

And then in 1994, a she-wolf that attacked flocks of sheep was saddled with the nickname of the “Beast of the Vosges”.

It was filmed by an amateur and was active for several months before being found dead in 1995. Protected by a Decree of the Ministry of the Environment, the protected animal could not be hunted, at least officially.  But who buried the remains which were found in early 1995?

The name of the Beast of the Vosges was later given to a type of lager produced in the Vosges area.”

In December 1975, at Rambervillers, forest workers noticed footprints of a carnivore that they could not identify. In March 1976 , in Domèvre-sur-Durbion, seven cattle and a number of sheep were found slaughtered.  A few days later, cattle were the victims at Moriville and sheep at Hadigny-les-Verrières.  They accused the Beast of attacks on poultry sheds, of  injuring horses and of slaughtering at least two hundred sheep. No attack though was made against human beings  After a final attack on sheep on June 2, 1976 , nothing more was heard of the animal.
A few years later, in 1994 , a female wolf was given the nickname of the “Beast of the Vosges”.  For several months it maintained its attacks on  flocks of sheep, before its remains were found on May 19th 1995 .
In 2011, after an absence of some 17 years, the Beast again attacked flocks of sheep in the Vosges in the village of Ventron; forty sheep were found dead in less than a month.”

“It all begins with a report on February 6th 1977 when Lucien Baret, a Federal Guard, is the witness as the beast stalks a roe deer in the woods at Rambervillier. It is some kind of enormous wolf-dog which hunts in the open without making the least noise. And then in less than ten months, not far short of 62 sheep, two lambs and a bullock weighing 300 kg have their throats cut out, and more than a dozen cattle are attacked.

What seemed at first sight to be a mere footnote in a newspaper, just mentioning  feral dogs, now becomes transformed into an affair with a monster where everybody has their very own something to contribute. First of all the talk is of a wolf or a dog or a lynx. And then suspicion turns to human beings. Fingers are pointed at certain people, but the favourite is Herr Reinartz, the owner of a vast estate which partially covers sections of a more ancient hunting ground, the most frequently hunted area in the region. Furthermore this German industrialist is not particularly lucky because he has a name very like that of a Nazi colonel, Colonel Reinardt, who committed atrocities in the region during the Second World War, only thirty years previously. This is a similarity which fans the flames of old hatreds. Present day Monsieur Reinartz fears for his life. Has he imported a couple of wolves to guard his estate, but then they have escaped, as certain people claim? Certainly not. A wolf only attacks in certain conditions and these were not fulfilled here. The estate of Monsieur Reinartz being a hunting ground, the wolves would have had more than enough to eat without having to go beyond their enclosures in search of what they already had in their cage. A large cage covering several hectares but a cage nevertheless.
And against all expectations, the press goes wild. The German industrialist is attacked. Abuse is heaped upon him. He is insulted on the front page of certain newspapers. The affair goes to court. Had he been of another nationality, things would probably not have degenerated in this way. None of this, though, stopped flocks of sheep being ripped to pieces by the teeth of the beast: 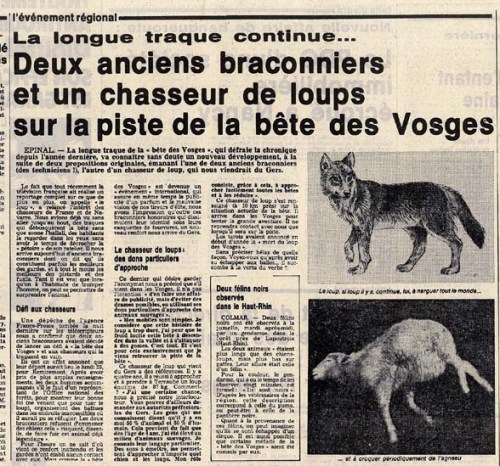 And then one day, roughly one year later,  everything just stops. No more massacres, no more animals to put out of their misery in the first light of morning. As mysteriously as it appeared, the Beast of the Vosges disappears. It flies away. All of this, of course, without anybody really understanding at all why. But after its disappearance, the Beast leaves lots of unanswered questions, and even 32 years later, tongues will not be loosened. There are a few clues perhaps, and doubtless some details are completely true, but the people who know, or who think they know, just add to the legend. One can well imagine what will have been written about this Beast in 210 years’ time when other people look at this business, in exactly the same way that we nowadays look back at the Beast of Gévaudan. How many arguments there will be in future generations between all the different viewpoints !
It is impossible not to see in this business numerous similarities with the Beast of Gévaudan. The same black magic seems to protect the animal which escapes through the fingers of the hunters on every single occasion . Beats are organised, but with only the same effectiveness of those of Duhamel in 1765, despite the fact they are now carried out with methods which the eighteenth century could not possibly have imagined. One day the Beast of the Vosges manages to escape its pursuers because one of the hunters is not at his post. A strange reminder of the indignation felt by the noblemen at Malzieu in 1765 when the Beast of Gévaudan was similarly allowed  to escape its pursuers because a guard was not in the correct place. And as one thing leads to another, people realise that this affair is not, in actual fact, very different from that of the Beast of Gévaudan. There are no human victims to pity, of course, but the chain of events is a mechanism which remains essentially the same for both affairs: first of all, people want to put things into perspective: it’s just a wolf. Everything will soon be taken care of. Then, as the Beast evades beats, traps and poisons, it becomes a tool of vengeance. In the Gévaudan of the eighteenth century the Bishop of Choiseul Beaupré sees the Beast as the avenging arm of God. In 1977, in the Vosges, it soon turns into a dog, radio controlled from some distance. But nobody will say a word about it. Nobody?”

This same website, and many others, contain the only three known photographs of the Beast of the Vosges. They prove it, apparently, to have been a canid of some sort, but not definitely a wolf. The account concludes with:

“always this question comes to everyone’s lips: the Beast, what was it? I asked Daniel Jumentier, who was present when the photos were taken, and he himself saw the Beast from afar

It was released to attack herds and flocks to hurt their owners.  Vengance between men, but through the intermediary of animals.  We can see two periods in the attacks: at first the Beast is confined to attacks on the plain, but then goes beyond La Bresse (a mountainous area) where it then goes wild. According to Daniel, one reason for this fit of madness: the loss of its master.”

And of course, unless somebody suddenly decides to speak up and reveal some hitherto hidden secret about this creature, we have reached the end of our investigation. Here some films to keep you going. The ancient ones date back as far as 1977, when Mankind’s existence was only occasionally slipping into colour:

And here is the second:

And this one shows that even a third comeback is not necessarily excessive:

There will be no more Beasts of the Vosges though. The Grey Wolf has now officially returned to the Vosges Mountains, thanks to the conservation efforts of a number of countries in the European Union, including Spain, Italy and Germany. Indeed, the Beast in 2011 was most probably one of the first two wolves who arrived in the Vosges that very year.  “Smile, you’re on Trailcam!”: