To keep birdwatchers on their toes, many birds exist in what are called “species pairs”. This means that you may know that a particular bird is either a Ruff or a Buff-breasted Sandpiper, but it will not necessarily be that easy to separate them:

And there are literally hundreds of these species pairs, some easy, some not quite so simple. House Sparrow and Tree Sparrow are unmistakable, but what about that rare vagrant to England, the Spanish Sparrow?

Montagu’s Harrier and Pallid Harrier, for females or juveniles at least, will require careful and probably lengthy examination:

Occasionally, a particular bird will never be identified for definite. Nearly thirty years ago, I drove all the way to Weymouth in Dorset, a round trip of nearly 500 miles, to see a Pipit which was present from mid March to early May 1989, in a field near the Observatory. Look for the orange arrow: 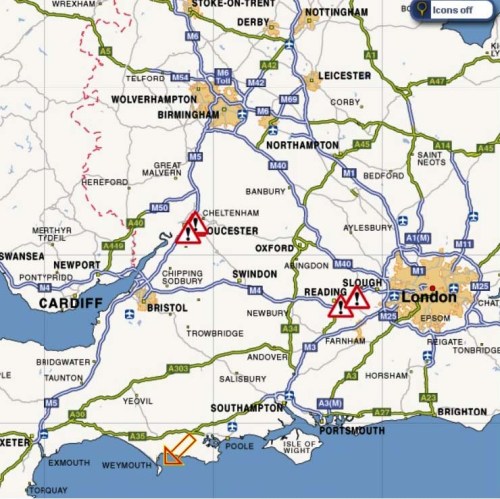 It was either a Richard’s Pipit (not that rare) or a Blyth’s Pipit (one of the first two or three ever in England). Here they are:

And the controversy has never really been solved. Indeed, this particular bird is usually known to twitchers as the “Portland Pipit” after the Bird Observatory in whose fields it spent the winter.

In the Victorian era, of course, without modern telescopes worth more than my car, and, more importantly, field guides with colour photographs, many birds remained unidentifiable especially if they were both fairly rare. One such pair, which I still find challenging enough even now, is the Cormorant and the Shag. Here is a Cormorant:

And here is a Shag:

You can probably guess what the Victorian solution was to this problem, at least as far as a rare bird was concerned. You shot the bird, if at all possible.

With all that in mind, let’s take a trip back to the real era of Steampunk:

“According to H.E. Forrest in a letter to “The Zoologist” magazine, it was on an unrecorded date during the year of 1863 that a single Cormorant was shot at Lamb Close Reservoir near Eastwood and acquired for the collection of Joseph Whitaker:

“The keeper had seen it about some few days and noticed when he put it up, it always flew over the boathouse to another pond beyond. He told Mr Percy Smith, who was staying there, who the next morning took his gun and stood by the side of the boathouse; the keeper rowed round the lake, the bird rose, came as usual and was shot. Just as Mr Smith was lowering his gun, another large bird followed and shared the same fate; on getting to it, he found it was an immature Great Black-backed Gull; thus he brought off a very curious right and left, and secured two very rare Notts birds, which through his kindness are now in my collection.”

Thirty years later, in 1893 came the appearance of another Victorian anecdote about cormorants, this time concerning a famous bird at Newark on Trent. Once again Joseph Whitaker tells the tale:

“I am indebted to Mr Cornelius Brown of Newark on Trent for the following very interesting note : during October 1893 Newark was a centre of interest to naturalists and others owing to the visit of a friendly cormorant which continued to perch week after week on the arrow on the top of the spire of the Parish Church. The Times, Standard, and most of the leading newspapers noticed the incident while Punch magazine had some poetry upon it. The bird went away several hours each day to fish in the Trent, and returned after its sport to its lofty perch, where it might be seen trimming its feathers and making himself smart and comfortable. It left on Friday, November 17th, the day after a heavy storm, after a state of eight weeks save one day.”

The poem appeared in the comical magazine Punch on November 11th, 1893, and is a surprisingly radical comment on the church in general and clergymen in particular. It went thus:

“We are told a Cormorant sits, and doth not tire,
For a whole month, perched upon Newark spire!
Vinny Bourne’s jackdaw is beaten, it is clear
Yet there are cormorants who, year after year,
Perch in the Church. But these omnivorous people
Favour the pulpit mostly, not the steeple
Thrivers upon fat livings find, no doubt,
Cormorant within is cosier than without.”

Wikipedia tells the tale of Vincent “Vinny” Bourne, a Classical scholar who wrote a comic poem about a jackdaw which lived on a steeple.(In Latin, of course)

For some people, the Cormorant was a bird of very ill omen. Out in the wilds of Lincolnshire:

“On Sunday, September 9th, 1860, a Cormorant took its position on the steeple of Boston Church, much to the alarm of the superstitious. There it remained with the exception of two hours absence, till early on Monday morning, when it was shot by the caretaker of the church. The fears of the credulous were singularly confirmed when the news arrived of the loss of the P.S.Lady Elgin at sea with 300 passengers, amongst whom were Mr Ingram, Member of Parliament from Boston, and his son, on the very morning when the bird was first seen.”

The Shag is very similar to the Cormorant, but is slightly smaller, a fact which is much more obvious when the birds are seen together. A single bird is often nowhere near as easy to identify as it is supposed to be. In the Victorian era both species were very rare in Nottinghamshire, so the chance of seeing the two together in order to make a comparison was never going to happen. For this reason, people had great difficulty in distinguishing between the two species of birds.

However in 1879, Joseph Whitaker wrote a letter to “The Zoologist” about some Shags which had turned up in the City of Nottingham itself.

“ON COMMON BIRDS IN NOTTINGHAMSHIRE.- ….Early in the same month, as some workmen at Nottingham were one morning proceeding to their work,  they came across two Shags, flapping about in Cross Street, and after an exciting chase caught them both. They were taken to T.White, birdstuffer, who tells me they dived for fish in his tank, eating several; he kept them alive for two days, but finding they “did not look like living”, killed and stuffed them. I have purchased them for my collection. Another was caught in a street close by, and the fourth was shot on Mapperley Plains. They were all young birds, possibly from the same nest, and having wandered away, got lost; or they may have been driven inland by a gale.”

In one of his newspaper articles about birds in North Nottinghamshire, published in the Nottingham Evening Post on June 21st, 1937 , Clifford W. Greatorex, a Fellow of the Zoological Society told the following story:

“Finally, mention must be made of a Shag, three or four examples of which were recorded in early spring from various parts of North Notts. Contrary to a widely held opinion, the Shag does travel inland occasionally, although its inland visits are not so frequent as those of the more familiar and more abundant Cormorant.

One of these visitors from the coast lingered on a part of Welbeck Lake, where it was seen by several reliable observers and its instinctive characteristics noted. Another, apparently injured in some way, was found in a field near a North Notts Village.

The finder induced this bird, which could not fly, to enter a small pond, where it remained, and for the greater part of the week was fed by school children who brought it herrings, soaked bread and table scraps, all of which were devoured with avidity. Unfortunately, however, its injuries proved fatal, and one morning the young folk were grieved to find their new pet lying dead upon the bank.”

Nowadays, Shags remain fairly numerous on the rocky coasts of England, particularly in the west, but overall, they are probably diminishing in number. They are still very rare inland. Cormorants are extremely numerous, enjoying the many lakes conveniently filled with large fish for anglers to pit their wits against. At the moment, they are a protected species, but this may not last too much longer.

In the meantime, Cormorants will continue to entertain, as greedy but ever optimistic birds: