On October 25th 1988, I went over to the Isles of Scilly to birdwatch. I crossed over from Cornwall on the ferry, the Scillonian:

For two or three hours during the crossing, I remained on deck with my binoculars, eagerly scanning the storm tossed waves for seabirds.

At one point, I noticed what I took to be the head of a Grey Seal, which broke the surface perhaps fifty or a hundred metres away from the boat. This is a Grey Seal which I photographed in the harbour at St.Ives in Cornwall: 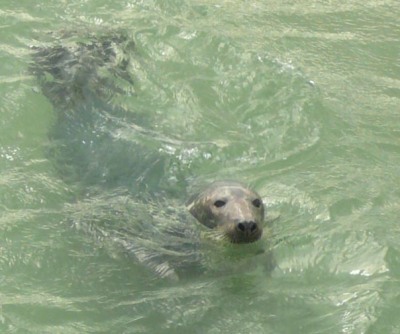 This head, way out in the Atlantic Ocean, was very similar, dark in colour, and I could see a forehead, two eye sockets, and an obvious snout. I didn’t really think a great deal about it, other than the fact that, for a seal, it was certainly a very long way from land, at least fifteen miles. It remained there, presumably watching the boat, for perhaps two or three minutes. Then, suddenly, a Gannet flew directly above it. A Gannet is a very large bird with a wingspan of some six or seven feet: 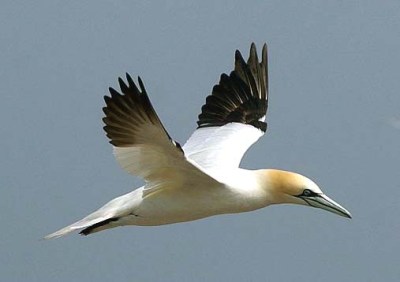 I then realised from a simple comparison of sizes that the head must be at least a metre and a half, if not two metres, across. And that means it cannot have been a seal !

Some thirty or more years ago, we used to live in a large house in a new estate on top of a hill right at the very northern edge of the City of Nottingham. From our top bedroom window, we could see the distant cooling towers of the Ratcliffe-on-Soar Power Station, out towards the East Midlands Airport, absolutely miles away. If it had been built then, we would have easily been able to see the Control Tower on the Airport. To go into Nottingham was a little bit of a bore, though, because there was only the Number 90 bus, which ploughed, every hour, a long and very eccentric furrow from one side of the city to the other, from where we lived on the northern edge, to the furthest bus terminal of Edwalton, beyond even the foetid swamp that is West Bridgford: 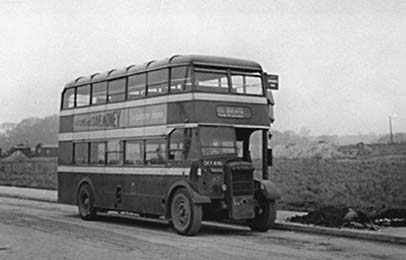 The Number 90 bus, strangely enough, had a very strong ghost story attached to it. People told me all about it on several occasions, almost as soon as I mentioned what bus I had to catch to get home and just how long the journey was. 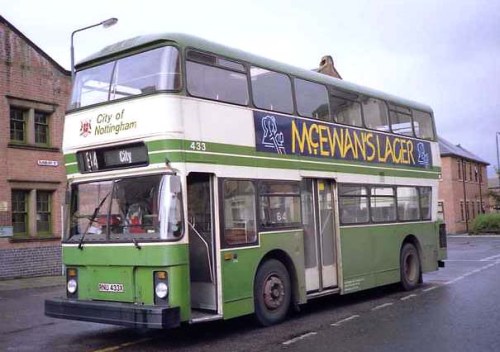 Funnily enough, the story concerned the very same bus stop on Mansfield Road which we used to use: 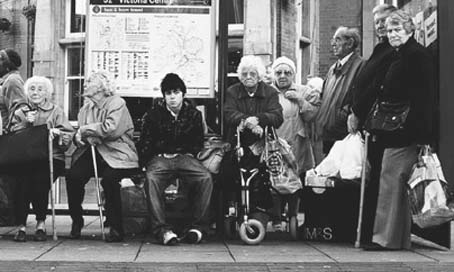 Anyway, the first occasion the ghost appeared was quite a long time ago, in the 1950s perhaps, or in the 1960s. It was certainly in the era of the bus conductor, who used to go round the bus, issuing tickets and taking the money.

Just imagine to yourself. The time  is around seven or eight o’clock in the evening, and the bus is absolutely deserted. Not a single passenger. The conductor is standing up near the driver’s compartment, talking to him to pass the time. Suddenly, they both notice an old man who is standing at the Mansfield Road bus stop, waiting to go towards the city. The bus stops and the old man gets on. The evening is fine and dry, but the old man is absolutely drenched, with rainwater dripping off him. He looks quite battered, with little rips here and there in his clothing, which is, strangely for the weather at the time, a heavy winter topcoat over an equally heavy winter suit.

The old man says nothing as he gets on. He goes upstairs and the driver and conductor notice he is wearing his bike clips, a simple aid to cycling that is, by now, almost decades out of date.

The driver and conductor finish their conversation. The driver sets off down the road, and the conductor begins the shaky climb up the stairs. He wonders why this special kind of idiot had to go upstairs on a completely empty bus and make the tired conductor follow him.

He gets to the top of the stairs and has a good, surprised look round. The top deck of the bus is completely empty. The old man just isn’t there. He isn’t in the two rows of seats at the front of the bus. The conductor then walks slowly back past all the other rows of seats. The old man isn’t there either, neither is he hiding behind any of the seats in a ludicrous attempt to avoid paying his fare.

Puzzled, the conductor goes back down again, pushes his cap back on his head, and expresses his astonishment to the driver.

Back at the canteen, they tell their tale over a cup of tea and a couple of cigarettes. They are not the first crew to meet “The Phantom Passenger of the Number 90 bus.”

He is, or rather was, an old man of sixty or so: 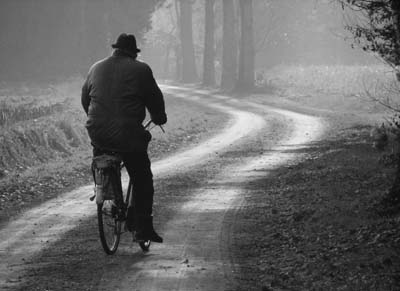 One winter’s night, he was riding his bicycle home to Arnold, when a hit-and-run driver killed him as he rode carefully and slowly around the Leapool Roundabout. It happened so swiftly that the old man does not realise, even now, that he is no longer alive. Wrapped up against the winter in his heavy suit and heavy topcoat, he still has his bike clips on. His bicycle, to him too valuable to leave behind, is too badly damaged to ride back home. And so, he must walk through the winter rain and sleet the two miles to the nearest bus stop to get back home to his wife and family. On this map, the orange arrow marks the bus stop where the wet old man would get on the No 90 bus. To the north is the Leapool Roundabout. Follow the green road until you come to the obvious roundabout: 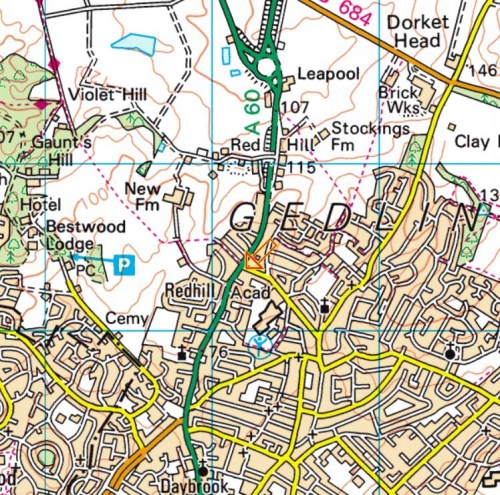 I don’t know now if the Number 90 still runs or not. I hope it does. No ghost should fade away at the whim of the Nottingham City Transport.