It was perhaps in the first half of 1959, a spring and summer of bright white clouds, bright blue skies and bright warm days. I was in the first year at Junior School, in Miss Cartwright’s class. I must have been seven years old. It was the morning of a late spring or early summer’s day, and we had just finished morning playtime, with little bottles of milk and the excitement of straws.

Before each class went back into their classroom, the teachers used to make the whole school line up, in an orderly fashion. Once everybody was quiet and behaving themselves, the classes could start to go in. We members of Class 6 were patiently awaiting our turn, when we all became aware of what even we, as small children, could immediately identify as an unidentified flying object. It was moving silently toward the south west, and was to all intents and purposes, like a grey, or perhaps metallic silver Zeppelin airship:

It was not like any of these obviously fabricated modern UFOs:

Under the main section of the craft, which was like a short, stubby cigar in shape, there was some kind of gondola, which was of the same colour, and had a number of conspicuous round portholes in the side. There must have been at least four of them.

I have not found any exact match for the UFO we all saw, but these two are both close. There weren’t any lights on the ends, though, and both drawings lack the gondola, which carried the portholes:

The UFO was only a few hundred feet up, at perhaps the same height that we used to see the Vickers Viscounts and Canadair Argonauts from Burnaston Airport flying over:

There were of course, no airships in 1959. I myself was a keen plane spotter, and in any case, at the time I watched it, I was sure that this was no plane. I still know the boy who was in front of me in the queue. I see him from time to time even now, fifty five years later. He too has no way of explaining away one of our most vivid childhood memories, despite having grown wise with a wrinkled face and long white hair.

Over the years, my friend Stuart Taylor was to tell me many stories about the ghosts which either he, his mother or his father had either seen or heard. At the time I believed him implicitly, although as we have drifted apart, and I have heard more about him from other sources, I have begun perhaps to doubt the veracity of much of what he told me. I find it difficult to explain away, however, the story of Mad Bill.

Near to Nottingham, at Netherfield, the main railway line to Grantham runs over the River Trent, and over the frequently flooded water meadows alongside it. The railway line crosses the river on a long, cast iron viaduct, which was constructed around 1850. The orange arrow points towards the viaduct: 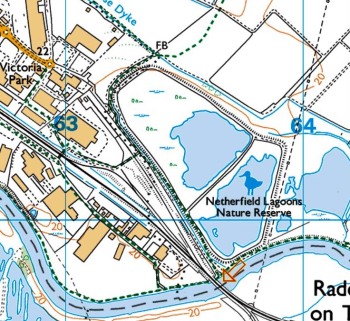 Popular legend among the railway workers said that in the depths of the night, as they worked on the track near the ageing viaduct, men would occasionally hear what was known as “Mad Bill”.

“Mad Bill” was a strange ghostly manifestation, and consisted of what sounds like somebody throwing down, very loudly and very angrily, a huge old empty oil drum. There is then a delay while Mad Bill apparently walks across to pick the oil drum up again, before throwing it down, and then beginning the process all over again. Nobody has ever seen anything, and it all sounds rather ridiculous, although as Stuart pointed out, these things can seem a little more serious when you’re all alone on the viaduct in the pitch dark at three o’clock in the morning, going back to retrieve a hammer or a shovel you’ve left behind.

“Mad Bill” always occurred on the isolated farmland to the north of the viaduct, which is still indicated by an orange arrow: 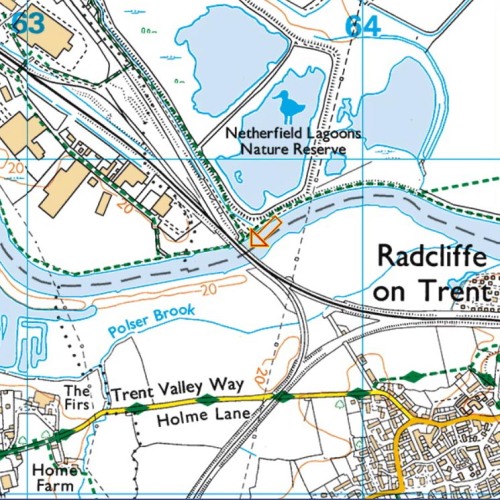 “Mad Bill” could also be heard on the lonely fields to the south:

One winter’s day, I was out bird watching with Stuart, on a gravel pit, next to the viaduct. It was around three o’clock in the afternoon, when suddenly every single bird took to the sky in blind panic. That is usually a sign that a raptor is about, and we scanned the heavens eagerly with our binoculars, in the hope of finding a Peregrine, or some other bird of prey.

We didn’t see one of course. But we did hear something, over on the far side of the river, on the deserted and inaccessible water meadows. It sounded just like some muscle bound idiot smashing a very large and empty oil drum onto the ground. It was still daylight, and we were able to check the area. There was nobody there, and as far as we could see, we were the only people for miles around.