He’s back! The Return of the Phantom Passenger of the No 90 Bus

This is another version of the story about the No 90 bus and the ghost of the cyclist. Clearly, this ghost story is a strong tradition which has persisted for many years on this western side of the Nottingham conurbation. I found this version of the story about five years ago, in a forum about ghosts in Nottinghamshire. I kept the website address at the time, but I can’t find it any more, and I presume the forum is now defunct.

On this map, the orange arrow in the centre points to Arnold Lane. I suspect that the young man who needed the loo went into the tiny wood to the north of the road, having parked his car pointing down what is  actually a very unpleasantly steep road:

The old man would have been pushing his bike up the hill:

I came home one night in the early hours of the morning from the White Post pub in a friend’s car, turned down Arnold Lane towards Gedling, just down the hill, the friend stopped the car as he needed the loo went round the back of the car. As I sat looking down the hill, I could see an old man pushing a pushbike up the hill on the other side of the road. Then suddenly, he just vanished into thin air.

I thought I had just imagined it but when the friend got back in the car, he asked me “Did you see that?” and I asked him “What?”” as we might have seen different things. He said “The old man. He just disappeared”.

I know some people might say, “Well, there’s a path off the road up there, he could have gone along that, but at the point he disappeared  there was just a very thick hedge. I was not really frightened but I was a bit shocked to see this. My Dad later told me a story of an old man who had come from the pit late one night was going home on his pushbike to Arnold and was hit by a car and killed. That’s why the path at the back of the hedge was put into make it less dangerous.”

To complete the Geography lesson, the open land to the east of Chase Farm is what is left of Gedling Colliery, the coal mine where the old man is supposed to have worked.

I know two more ripping yarns about buses, both of them told to me by a birdwatching friend, Phil, who had worked initially for Liverpool City Transport and then for Nottingham. One story involves the supernatural, the other, a bus driver who was exceptionally lucky not to become a member of the supernatural.
The lucky bus driver occurred when Phil worked in Liverpool in the early 1960s. There was a good two or three inches of icy snow already on the ground, and an absolutely impenetrable “smog”: 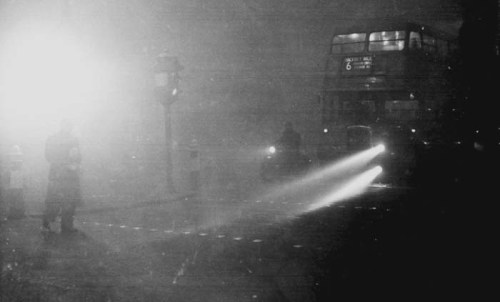 “Smog” was a speciality of the era, and it was a dangerous combination of natural fog, perhaps where the warmer sea met the frozen land, and the thick smoke which came from the tens of thousands of houses heated by coal fires and a good few coal fired power stations around any city in the country:

That day in Liverpool, therefore, the weather conditions combined to produce a bizarre situation, whereby the bus driver could not see where he was going, even at walking pace, but at the same time, he left tyre tracks in the snow which let pedestrians see exactly where the bus had been. Imagine, therefore, the pedestrians’ shock to see that an unknown Liverpool bus, full of scores of workers on their way home from the shipyards, but completely lost in the whiteout conditions, had been driven for more than eighty yards along the edge of the docks. leaving tyre tracks just a couple of inches from the twenty foot drop into the icy waters of the Mersey. The lucky driver had finally turned right to safety rather than left to a watery doom:

Phil told me a second story, a supernatural tale, all of which had taken place in the Bus Depot in Sherwood, the very same suburb of Nottingham where I live:

Apparently, the bus in question had some mechanical problem and it was being mended. It was jacked up on strong supports while repairs were carried out.

Only the strong supports gave way, the bus skewed to the left and the mechanic underneath was crushed to death.

A few days later, the repairs to the bus were completed without any further problems. The bus was parked away on one side of the garage while a driver and conductor could be found to take it away on its afternoon route. The two duly arrived just after one o’clock, The conductress stood at the back of the bus while the driver went to get into his cab and warm up the bus engine.

Except that before he could even unlock the door to get into his cab, the bus handbrake must have come off, and the bus rolled backwards. The surface was steep enough for the vehicle to pick up a fair speed, and the unfortunate bus conductress was pinned against the wall of the building. She died in hospital just a few days later.

.
Trade Unions were a lot stronger in those days, and when the shop steward said that his members were adamant that they would not work with this bus, the management had to pay attention to their demands, The decision was taken to dismantle the bus and use all of its parts as spares.

For a long time afterwards, all the drivers and conductors in the depot at Sherwood had the belief that if any serious accident occurred then it must be a bus which had been given, perhaps, the engine of the killer bus, or maybe its rear wheels and axle. And while this belief went on for a good few years, it was ultimately unprovable because no record was ever kept of which parts went into which bus.