Having explored the history of the High School for more than twenty five years, I have always thought that the school’s beginnings are shrouded in mystery. For me, the High School has always been very like the Soviet Union:

“a riddle, wrapped in a mystery, inside an enigma”

What do we know about the founder of the school, Dame Agnes Mellers, for example? What was she like as a person? There are a very few illustrations which are thought to be her. This is the school’s charter: 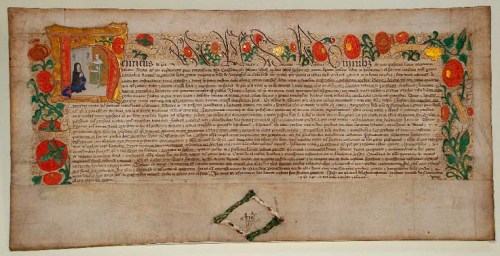 And here is a close-up of Dame Agnes and King Henry VIII: 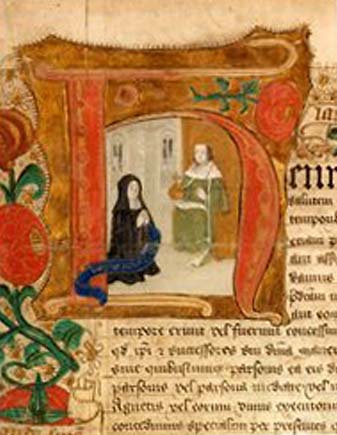 This is the charter changed into a line drawing: 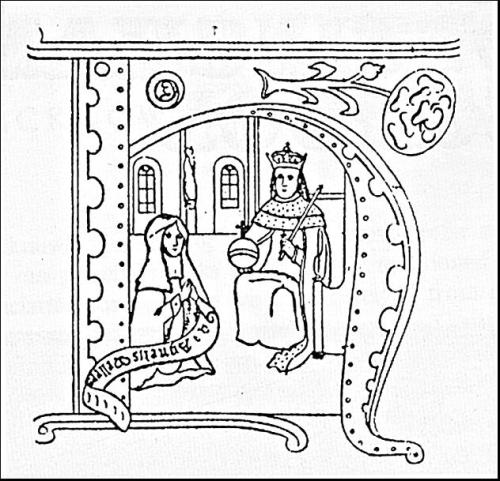 For me, there have always seemed to have been two enormously important motivating forces in her character. The first was her staunch religious faith as a Roman Catholic with a sincere love of Jesus Christ and the Catholic Church. Dame Agnes seems in many ways to have been an uncomplicated soul, who viewed the world in a simple direct way. She tried to be a good person, with the sincere belief that we should all try to make things better rather than worse, that we should do good things rather than evil and that we should always strive to be on the side of the Angels.

The second motivation for her was the love she had for her husband, Richard, which seems as sincere and unswerving as her love for the Church. Richard was, as his name suggests, a rich man. He was at one time or another, Sheriff of Nottingham (1472-1473), Chamberlain (1484-1485) and Royal Commissioner and Mayor of Nottingham (1499-1500 and again in 1506). In 1499, he is known to have given twenty shillings to help repair the Hethbeth Bridge, as Trent Bridge’s predecessor was called. Here is one of the last photographs ever taken of the old bridge before it was superseded by the present Trent Bridge. You can certainly see why it was easier for the river to freeze up in those days:

This is all that remains of the Hethbeth Bridge nowadays:

It is in the middle of a road island to the south of Trent Bridge. If you decide to take a look at it, be very careful of the traffic and use the proper crossings. Look for the (camouflaged) orange arrow in the centre of the (red) road junction: 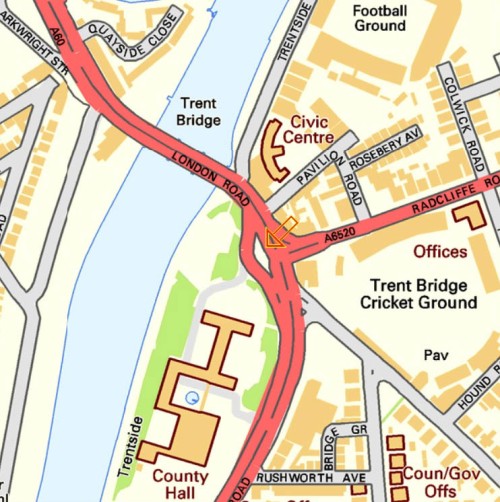 Richard Mellers was a brazier, and probably a potter, and he had certainly dealt in metal pots and dishes. Most important of all, he owned the largest church bell-foundry in the region. The site of his premises has long disappeared, but its exact location is still known today.

From 1888 onwards, just a very few yards north of the city centre, steps began to clear away:

“a curious V-shaped slice of slum property…a most unhygienic and immoral neighbourhood and nothing good could be said for it”.

This slum clearance took a number of years, and resulted in the formation of King Street and Queen Street, the latter being opened on June 22nd, 1892.

During this time, it was inevitable that, along with all the slums and all the undesirable features, a few other more reputable premises were destined to disappear. Among these was Richard Mellers’ Bell Foundry, which is known to have stood more or less exactly on the site of the present day Queen Street Post Office. The orange arrow points to the general area, and the letters PO stand for the purple edged Post Office: 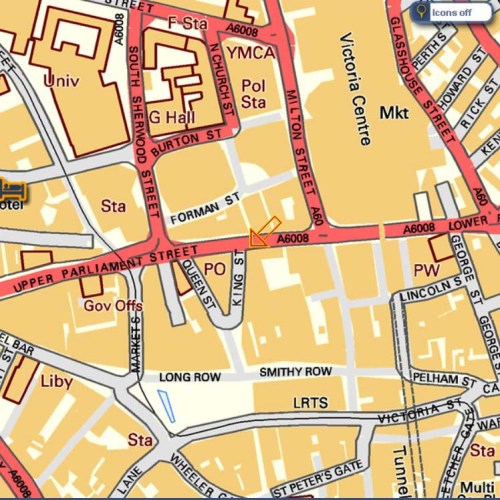 Perhaps it was working so close to such an “immoral neighbourhood” that deflected Richard away from the straight and narrow. He had, for example, already paid out £20 to be the Mayor of  Nottingham for twelve months. There wasn’t really much of the democratic process involved here, or indeed, much evidence of any genuine interest in the workings of democracy. That payment of £20, a rather sizeable sum of money by modern standards, may well have been the reason that, in the very same year, Richard had been so keen to do a good deed by paying  for the upkeep of the ever ailing Hethbeth Bridge.

Richard was certainly widely known as a fairly unscrupulous businessman. During his lifetime, in his efforts to acquire great personal wealth, he certainly seems to have cheated many of his bell buying customers. In 1507, for example, we know that Richard had received a pardon for having committed offenses against the statutes of weights and measures. This charge is believed to have related to problems with the purity of his bells and the metal they contained. The pardon would only have been granted because of his previous position as Mayor of Nottingham. A less prestigious person would have been in very, very, serious trouble. These bells, though, are all 100% the real peal: