Where did those three “merles” come from? Part Two

Last time, I posed a number of questions about the three black birds on the school crest, the so-called “merles”, and the coats of arms of a number of different families with the surname Meller, Mellers, Mellor and even Mellors:

If you remember, I was far from convinced that there was any connection between Dame Agnes and any of these families, the closest of them a minimum of a week’s journey away in Manchester. I was equally doubtful about the existence of “merles” as a bird in English heraldry. Indeed, overall, in English, the word “merle” does not really seem to relate particularly strongly to birds at all.

Wikipedia, for example, states that “merle” is a first name used by both men and women, a surname of French origin, a rather beautiful pattern in dogs’ coats, another name for the wine grape Merlot, a German glider originally built in 1938 for the 1940 Olympics gliding competition, a Crusader fort near Tantura on the coast of Israel and finally mentions the fact that the MS Phocine, a ferry, was originally named MS Merle.

In the bird world, Wikipedia states that it is a name for the “Icterid varieties of which the male is predominantly black, especially the Common Blackbird, Turdus merula.” The first word is the Latin for thrush, and “merula” means Blackbird.
I need to say here that “Icterids” are exclusively American birds such as grackles, orioles, cowbirds, meadowlarks and bobolinks:

Back to Wikipedia, which continues with the fact that “merula” gives the French their word “merle” and also gives the Scots their word “merl”. According to Wiktionary, it is also an “English 19th century bird name from merle, blackbird, possibly also a variant of Muriel”. That is in itself quite interesting as many common birds in Merrye Olde Englande had their own human names. Jack Daw. Mag Pie. Jenny Wren, Robin Redbreast. Sparrows were called Philip because of their chirping call. A modern equivalent would be the Soviet ruler, Joe Starling.
Very tenuous links between Dame Agnes and merles therefore, made all the more tenuous by another, etymological, dictionary,  which states that “merle” is a late fifteenth century word which nowadays “owes its survival in modern times to its use by Scottish poets.” And how many fifteenth century Scottish poets can you name? Or any living, modern ones come to that?
Scotland, of course, is even further away from Dame Agnes than Manchester. And just in case you see a possible link between Dame Agnes and the “late fifteenth century”, don’t forget that the alleged Mellers’ coat of arms wasn’t ever used by her, and first appeared only in 1808.

Sooooo, where did that coat of arms come from?

Well, just for a moment, let’s go back to that idea that Dame Agnes was a lifelong staunch Roman Catholic with a very real fear of Hell for wrongdoers, especially those who might have cheated their customers a bit, perhaps when they were flogging them very large and very expensive bells.

One evening, sitting comatose in front of our TV set, I happened to see this coat of arms on a documentary programme as the camera panned down the High Street of a famous city:

The city was, of course, Canterbury. But where did the City of Canterbury find those striking and exciting  black birds? Well, it’s not a huge surprise:

The shield above is that of Thomas Becket also known as Saint Thomas of Canterbury, Thomas of London, and later Thomas à Becket. Born in December of probably 1118 or 1120, he became Archbishop of Canterbury in 1162 but was then martyred in Canterbury Cathedral on December 20th 1170 by followers of Henry II, namely Reginald fitzUrse, Hugh de Morville, William de Tracy, and Richard le Breton.

Here is an account of the slaying, written by eyewitness Edward Grim. Edward must have been an extremely brave man. Completely unarmed, the young clerk stood up to four knights dressed in chain mail, all of them equipped with the heavy savage swords of the era. Edward was gravely wounded in the incident, as he tried in vain to protect Becket (Reader discretion is advised):

“The wicked knight leapt suddenly upon him, cutting off the top of the crown of his head. Next he received a second blow on the head, but still he stood firm and immovable. At the third blow he fell on his knees and elbows, offering himself a living sacrifice, and saying in a low voice, “For the name of Jesus and the protection of the Church, I am ready to embrace death.” But the third knight inflicted a terrible wound as he lay prostrate. By this stroke, the crown of his head was separated from the head in such a way that the blood white with the brain, and the brain no less red from the blood, dyed the floor of the cathedral: 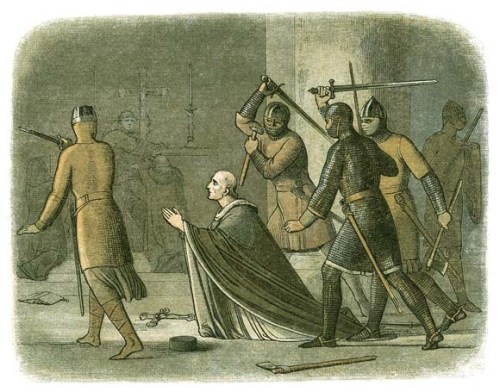 The same clerk who had entered with the knights (not Edward Grim) placed his foot on the neck of the holy priest and precious martyr, and, horrible to relate, scattered the brains and blood about the pavements, crying to the others, ‘Let us away, knights; this fellow will arise no more.”

Soon after this famously gory death, Thomas was promoted to sainthood by Pope Alexander III. Canterbury Cathedral subsequently became the most important centre of pilgrimage in England, most famously for Geoffrey Chaucer.

The birds on Thomas à Becket’s shield have red feet and red beaks and they are nowadays called “choughs”, although apparently in medieval times, they were often referred to by pilgrims as “beckitts”.

I feel sure that there is some kind of clue here:

19 responses to “Where did those three “merles” come from? Part Two”