I told you in previous articles that there were more werewolves about than you might think. News came in recently, on Sunday May 15th, of werewolf sightings near Hull in East Yorkshire. The national newspaper, the Daily Express, took up the story. Here is a highly abridged version:

“Seven separate eye witnesses claim to have spotted the 8ft tall creature lurking in an abandoned industrial area outside the centre of Hull.

Residents and folklore experts believe the beast is Old Stinker who, according to legend, is a foul-breathed creature in the Yorkshire Wolds.
The lonely banks of Barmston Drain are where the creature was first reported before Christmas.
One woman claims to have seen it turn from man to beast as she stood on the bridge”: 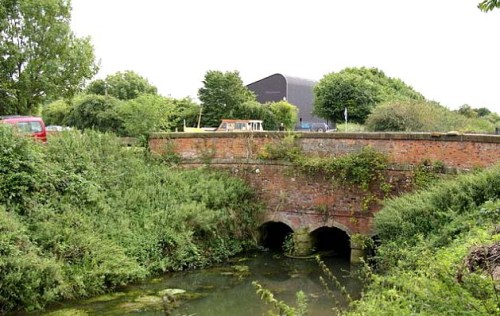 She said: “It was stood upright one moment. The next it was down running like a dog. I was terrified.
It bounded along, then stopped and reared up on its back legs, before running down the embankment towards the water.
It vaulted thirty feet over to the other side and vanished into some allotments. It both ran on all two legs and on all fours, as if with the qualities of both human and wolf.”

A couple saw “something tall and hairy” eating a German Shepherd dog next to the Drain.
They saw it jump an 8ft high fence before vanishing into the night, its prey still in its jaws.

I have a link to that. Something tall and hairy, eating a German Shepherd dog?

A woman walking her dog spotted something “half-man, half-dog” in the distance.
She was terrified, and her pet began shaking and refused to go any further:

Well, this monster could well have become a minor source of tourist revenue, particularly with the right people in the right costumes. Unfortunately, though, the locals chose to shoot themselves in the foot.

Let’s take the high risk strategy of going to look for “Old Stinker”, the moment the next full moon raises her beautiful head. Notice how the local councillor just can’t keep away, and his almost childlike faith in Hull Council:

“Now locals plan a werewolf hunt with cameras and recording equipment. Councillor Steve Wilson has offered to keep an incident log: “I am happy to keep a diary of sightings by people around here and report them to Hull Council.”

Just one step from the Stasi.

Local author Charles Christian said: “Old Stinker was actually said to be operating on the other side of the Yorkshire Wolds but it would be no distance at all for a large animal to get to Hull.”

What faith in the public transport system. Why, it’s probably run by Hull Council:

Mike Covell, an expert in the supernatural, said: “No one really knows what to do. You can hardly pop down the local council office or police station and say you’d like to report a werewolf.”

Well, Mike, have I got news for you. That is exactly what everybody has been doing. On a discussion forum, watertight evidence was provided of previous werewolves in Yorkshire by “wmysteries90″:

“I had one witness claim they saw a huge dog which stood up, jumped over a fence and then run off with a cattle animal.(sic) Then his friend came forward to his fried stating he had seen a huge dog in the same area. (sic) A woman claimed she heard a strange howl. While a former military guy with an undisclosed area on the moors stated that few years back with a routine team in the middle of the night they had the sense of being watched by something.

Also there have been claims made by people around the moors stating that they have either seen or heard strange howls, growls.”

Indeed, the Daily Mail were to concentrate more fully on placing the “Barmston Drain Dog Destroyer” in its proper context, once they had established that the Werewolf Councillor was from the Labour Party.

Old Stinker, therefore, was supposed to haunt the “Wold Newton Triangle” (the what??), an area known for mysterious activity (really?): 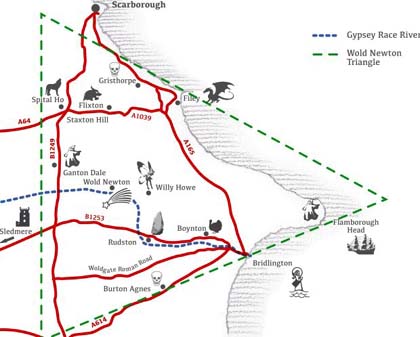 “For centuries, tales have circulated of zombies, ghosts, and Old Stinker – a great hairy beast with red eyes, who was so called because he had bad breath…people would glimpse the rear lights of a car in front, but it would reveal itself to be the red eyes of a wolf.” 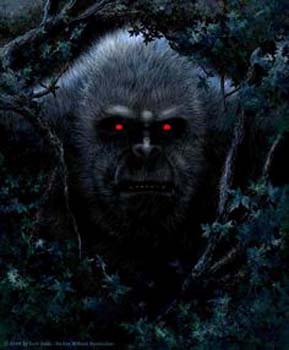 How often that has happened to me. Although driving a 1994 Volvo I don’t catch up too many cars, or werewolves, for it to be a real problem. Well, it’s not as bad as ice or sudden banks of fog.

If you want to investigate further the question of “How gullible can people get?”, then this is a similar story, set in the same area, but harking back in the “Golden Age of Satanic Panic”. 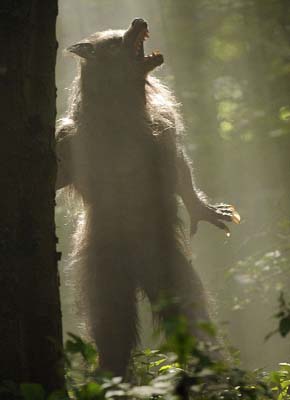 My previous story about the “Barmston Drain Dog Destroyer” and the “Golden Age of Satanic Panic” was soon followed in the national press by the story of two people who saw what they thought was a puma type creature as they returned home along country lanes around Pershore in Worcestershire in the early hours of the morning: 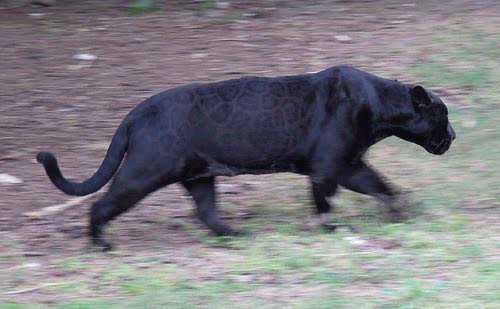 They suddenly saw a “muscular black animal” in the middle of the road. It was around one metre long and they were forced into an emergency stop. The creature circled the car and appeared to be about as tall as the car window. Its eye reflection was green. Frightened, the couple drove off, but not before they had noticed what they took to be the eyes of the creature’s mate hiding in the darkness of the hedgerow: 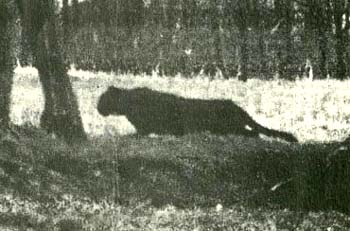 There have apparently been other sightings of puma type animals elsewhere in the county, at Evesham, Malvern and in the Malvern Hills.

Indeed, there are continuing reports of pumas or ABCs as they are called (Alien Big Cats) all over the country. In Leicestershire, for example, experts have said that there are two territories which overlap around the East Midlands Airport at Castle Donington. Rutland Water is included in one of them: 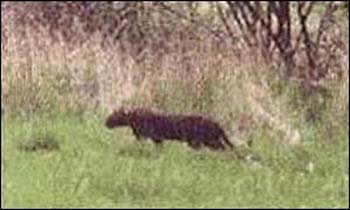 Even I have seen one, while I was trying out my new “see in the dark” binoculars. I thought it was a fox at the time, but I now realise that foxes don’t have long curved tails, wide faces or big round ears. There are even videos of these killer cats. This one comes from AnimalInfoTV, who produce a great number of really interesting looking videos on a number of different subjects. I would commend them to you:

Going back to the “Puma of Pershore” though, what makes this news story quite extraordinary, however, is the fact that when the couple did a drawing of what they had seen, because a werewolf had been spotted near Hull around the same time, the consensus of opinion suddenly became that they had actually seen the “Worcestershire Werewolf” rather than the “Puma of Pershore”.

Well, here is their drawing. Make your own mind up. “Worcestershire Werewolf”?? or the  “Puma of Pershore”?? 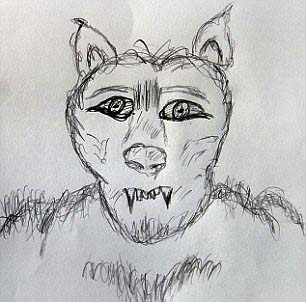 I went to Pershore twitching once. It’s a really lovely place. It was to see a Black-throated Thrush, which was at the time, a mega-rarity: 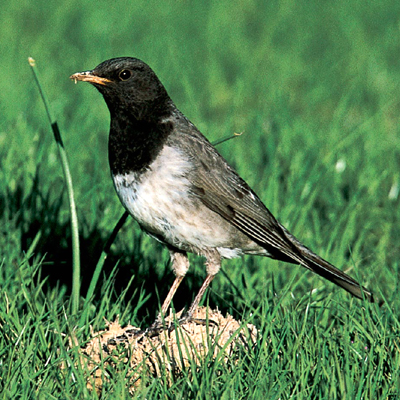 13 responses to “A Werewolf in Yorkshire: Eeh bah gum (again) !”