Of late, there has been an increasing number of claims by people who think that they have seen Bigfoot in Great Britain. If you think Bigfoot is a physical being, descended from gigantopithecus blacki, then for me, that particular idea of seeing such gigantic creatures in tiny England is almost beyond ludicrous.

If you think Bigfoot and all his pals come through vortices in time and space, wormholes in the structure of the dimension, then I suppose his existence here would perhaps be a definite maybe.

Rather reminiscent of the “Barmston Drain Dog Destroyer”, this is a tale from Tunbridge Wells. I have précised the account in the Daily Mail, although it did appear in a good few other newspapers in almost identical form.

Tunbridge Wells, incidentally, is located in west Kent, forty miles from London. The population is about 56,000:

A man walking in the 200 acres of woodland beside the town’s common claims to have spotted an 8ft tall black beast with demonic red eyes and long arms.
The ape-like creature, which looked like America’s legendary Bigfoot, roared at the walker, who immediately ran off in fear.”

And of course, that is not the only report in Tunbridge Wells. All the people who have seen Bigfoot in the local library car park suddenly come out of the woodwork to tell the tale.

“Over the past six months there have been a number of sightings. Locals in Tunbridge Wells have mixed opinions, with some believing it could be a joker wearing a fancy dress costume.
Scientists say rumours of its existence have come from folklore and hoax.”

Interestingly enough, though, there is a tale of a strange creature being seen in Tunbridge Wells well over seventy years ago in 1942. Every monster has to have a name, preferably slightly comic, and presumably in an effort to make it a little less monsterish. He has, therefore, been christened “The Kentish Apeman” or “The Apeman of Kent”. The tale was told best in the Kentish News:

“He was first spotted on the town’s common seventy years ago.
An elderly couple saw it in 1942.’They were sitting on a bench when they became aware of a shuffling noise behind them.
Turning around they saw a tall, ape-like creature with eyes that were burning red moving slowly towards them at a slow pace.. They observed this creature for some time until they became afraid and both fled – terrified.” 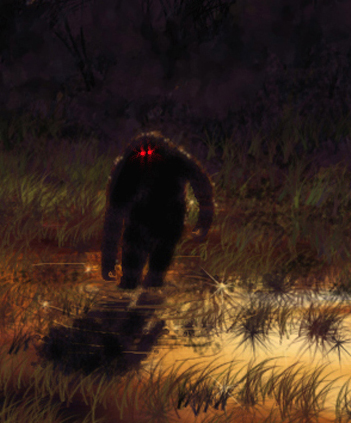 “The old lady went on to say that they told the police and members of their family, thinking that a gorilla had escaped from a zoo, but they were laughed at and were not believed.” 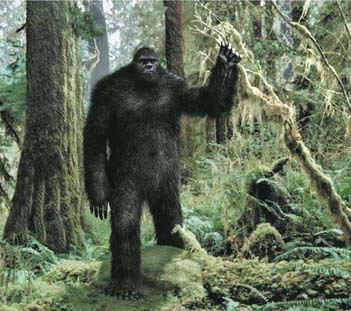 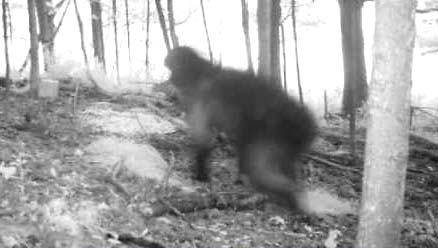 Well, there we are. No real, concrete explanation. Not like the famous Man-Monkey of Ranton. (The what?):

“On January 21st 1879, a labourer was employed to take a cart of luggage from Ranton in Staffordshire to Woodcock in Shropshire.
“He was late coming back. His horse was tired, and could only crawl along, so that it was late at night when he arrived at the place where the road crosses the Birmingham and Liverpool canal.
“Just before he reached the bridge, a strange black creature with great white eyes sprang out of the plantation by the roadside and alighted on his horse’s back.”

“He tried to push it off with his whip, but to his horror the whip went right through the thing, and he dropped it on the ground in fright.”

When the man recovered from the fright, he returned home and excitedly spread the story.
A few days later, a policeman came round to his house and told the frightened man: “That was the Man-Monkey sir.”

Not much gets past our police, does it?

11 responses to “Bigfoot? Where? Tunbridge Wells?”