The Oldest Old Boy of Them All (4)

Many, many years ago, in 1990, my friend and colleague, Simon Williams, interviewed Roy Henderson who was then one of the oldest Old Boys still alive. In due course, I transcribed the taped interview and added some extra explanatory details where this seemed helpful to the reader. This is the penultimate section of an eventual five, all of which describe the High School just before the outbreak of the Great War, and then during the first few years of the conflict.

Roy used to live at 3, Lenton Road in Nottingham’s richest area, The Park. He would be awakened by another High School boy called Alfred Tregear Chenhalls, who would come along the road as he walked the family dog, and whistle loudly that it was soon time to go to school. Roy was then accompanied to school by his friend, who was walking from his own family house at 2, Hawthorne Drive in The Park. One particular day in the Fourth Form, Alfred Chenhalls did not arrive, and Roy Henderson was therefore late. Mr Lloyd Morgan ticked him off:

“Who shall we punish? Chenhalls or his dog? ”

Alfred Chenhalls, whose father, like that of Roy Henderson, was a minister of the church, later became an accountant who dealt with lots of musicians and theatrical people, including the famous Hollywood actor, Leslie Howard. Chenhalls always smoked a large cigar, and as a big fat man, looked rather like Winston Churchill. He was killed on June 1st 1943, when the unarmed DC-3 of the B.O.A.C., carrying him and Leslie Howard between Lisbon and London, was shot down by Junkers Ju 88s of the German Luftwaffe. Here is the Douglas DC-3 Dakota, in question:

At the time, Churchill was known to be attending a conference in Algiers, and there was much speculation that a German spy had seen Chenhalls getting onto the plane in Lisbon, and had then organised its destruction. Here is Chenhalls pretending to be Churchill:

Further confirmation of the Germans’ interpretation was that Churchill’s colleague in Algiers, the Foreign Secretary, Sir Anthony Eden, looked very like Leslie Howard. Alternatively, Leslie Howard may have been thought to be Detective Inspector Walter Thompson Churchill’s personal bodyguard. Whatever the complex truth of it, Churchill himself considered all his life that this was a definite  assassination attempt. The incident was also one of the very few occasions when airliners were ever attacked on this route out of neutral Portugal. Much more detailed information on the event is available here.
At this time, many boys had nicknames. Donald James Clarkson was always called “Pug” because of his upturned nose. Here he is:

Another boy, an extremely good Fives player, was called, for obvious reasons, “Sparrowlegs”. Strangely enough, though, only one particular boy ever had a certain nickname. Nobody could ever be called “Pug” or “Sparrowlegs”, as long as the original boy remained in the school. There seemed to be no obvious reason for the nickname of “Fuzzy” Barton, given that his hair was not in the least bit curly. Peculiarly enough, though, his elder brother had extremely fuzzy hair. He, though, was never called “Fuzzy”.

Eventually, the younger Barton became the Headmaster of King Edward’s School in Sheffield. The latter establishment had an extremely peculiar cricket pitch, which was constructed on various levels, with a number of different slopes, flat areas, and two or three quite sharp drops. Certain unfortunate fielders were unable to see either wicket, and pieces of information had to be passed on to them by other fielders one level higher up.

Because of the Great War, and the subsequent restrictions on travelling by train, there were very few away matches at cricket. Boys went only to Derby, Worksop or Sheffield, but never to Denstone or Birmingham. On many occasions, they played home fixtures against Army teams billeted in the area, including a few Italian ones. This was much more enjoyable than the very limited number of fixtures against other schools.

If they did ever travel by train, High School teams invariably used the now demolished Victoria Station. You might recognise the Clock Tower which still stands nowadays, outside the Victoria Shopping Centre. The hotel on the right is also still there:

Here is a steam train coming out of the tunnel which took rail traffic northwards towards Worksop and Sheffield. This tunnel is still visible, either from the modern multi storey underground car park or from Huntingdon Street:

At this time, in the school, in general, the rules on caps were very strict. Roy Henderson himself had a special dispensation from the Headmaster and was allowed not to wear a cap in school. For some unknown reason, his mother had contacted the Headmaster, and the latter had agreed to this special privilege. Roy wore a cap for the first time when he became a prefect, and that turned out to be a spectacular piece of headgear with a silver badge on it.

Roy was the secretary of the School Debating Society. He spoke quite frequently in debates, despite, by his own admission, not being particularly good at it. The meetings, which were mostly in the winter term, took place after school, between twelve and one o’clock on Saturday afternoons.

When he left the High School, Roy joined “B” Battalion of the Artists’ Rifles. He had already learned a lot in the school’s Officer Training Corps, as was confirmed by the first drill sergeant that he encountered in the regular army. Later, he joined the Regimental Concert Party, which did its training at Lichfield. Roy, because of his age, missed the Great War by a few weeks, but he caught Spanish Flu in January 1918. He was not to leave hospital before August 1918.

At the High School, there had been no specialist singing master, and no real in-depth teaching of music. Roy had never realised that he had any particular talent in this field, until he sang solo during the interval of a school play, and was overwhelmed and astonished by the great volume of applause which he received. Roy later went on to sing at Speech Day. Within only a few years of leaving the High School, he had become one of the leading singers in the country, who was destined to work with some of the greatest musical talents in the whole world. I have been unable to find any photographs of Roy Henderson, but here is one of his record labels: 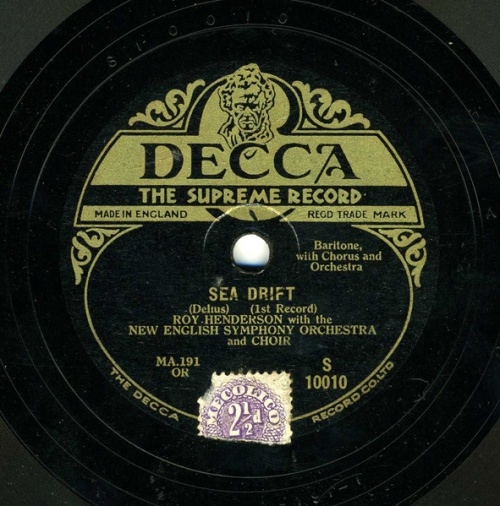 And here is one of his album sleeves: 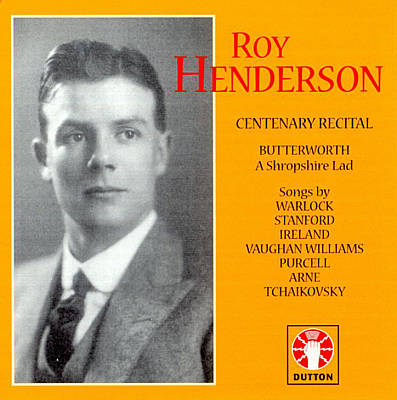 In the near future, I will continue with the fifth, and final, article in this series. I hope you are enjoying them and finding them interesting.