You may already have read some of the extracts I have featured from”The Date-Book of Remarkable Memorable Events Connected With Nottingham and Its Neighbourhood 1750-1879″, by John Frost Sutton. I have already found one description of what would nowadays be called a million pound fire, and it’s not the only one:

“About half-past two in the morning the night watchman employed at the hosiery factory of Messrs I & R Morley in Manvers-street, while passing through the factory yard, saw some smoke but no flames issuing from a room in the centre of a block immediately over the cellar used to store cotton. He at once gave the alarm, which soon brought a body of willing hands together, and the hose reel belonging to the factory was immediately put in operation.”

“To the surprise of all present, though, there was scarcely any water in the cistern which was kept on the premises to be ready in case of fire. In the meantime several messengers had gone for the fire engines, and about fifteen minutes to three in the morning a body of men set out with the hose reels, followed immediately by the steam fire engine, the manual engines being sent afterwards in quick succession”.

Here is a steam fire engine:

And here is the thrilling scene I found, of another very similar steam fire engine, rushing to the fire. Notice the Spotty Dog who is playing the part of a SatNav system:

Here come the more genteel firefighters of the Victorian age:

Time for a quick photograph and then we’ll start sorting out that fire for you:

“By this time though, the flames had really taken hold of the middle of the building where they had originated, and passing along the south side had become totally unmanageable.”

This is Manvers Street, on the north bank of the River Trent, where the road leaves Nottingham for Southwell. Notice the orange arrow which points to Manvers Street itself, and to the east, the packed terraced streets of Sneinton which provide the labour for the factory. To the west is the railway system used to take the finished product to its destination: 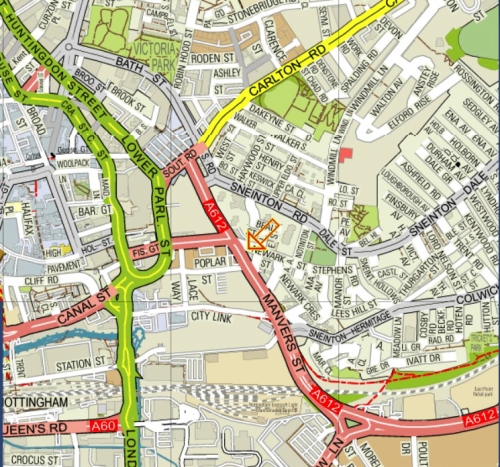 “At about 3.15am, a large portion of the walls and floors collapsed. About four o’clock the whole of the remaining walls, and the roof of the Manvers-street part of the factory came down as well . Some idea of the crash may be formed, when it is stated that the noise was heard as far away as Radford and the surrounding villages. The sight of the ruins when viewed from the Southwell-road end of Manvers-street was almost beyond description.”

I think that this is Morleys’ factory, presumably rebuilt after the fire:

Back to the story:

“Of the front of the factory, 200 yards long, nothing remained but an immense mass of bricks, iron, and wood, intermingled with the burnt remnants of hosiery goods. This was by far the greatest fire that has occurred in Nottingham in the memory of man, not excepting the Castle, the damage being estimated at £100,000.”