On a dull, dreary, drizzly day in winter, the author stood with the football team coach, Tony Slack, watching the First XI play a well contested match against High Pavement 2nd XI. We were on the Forest, at the side of a pitch which has now been partially covered by the all-weather facilities. Look for that orange arrow:

Suddenly, eighteen year old Norman Garden, his sleeves rolled up in determined fashion, won the ball with a strong, vigorous tackle at the edge of his own penalty area:

He came forward with the ball at his feet and set off thoughtfully towards the opposition goal. Looking up, he sent a long, curving, arcing pass out to young Bert Crisp on the left wing. Bert trapped the ball, then ran forward ten yards or so, and looked across at the attacking possibilities: 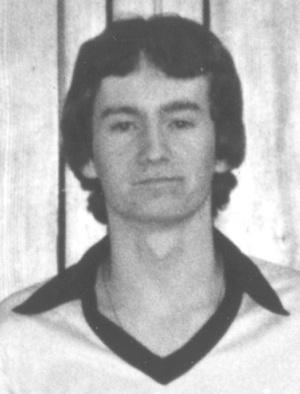 Five yards outside the penalty area stood Chris Ingle, the team’s centre forward. He was in his usual pose, apparently disinterested, lacking commitment, without any apparent desire for hard physical involvement, a young man who only came alive when he saw the whites of an opposing goalkeeper’s eyes:

Chris began to move. He accelerated slowly but purposefully from his standing start as he crossed the white line of the penalty area. Bert Crisp instinctively knew what to do. He clipped in a wickedly curving centre, about four or five feet above the ground. It was timed to arrive at the penalty spot at exactly the same time as the deadly centre forward. Chris Ingle, as the ball flew in front of him, launched himself full length over the cloying mud.
He met the ball hard with his forehead, catching it a blow which rocketed it towards the top corner of the net. “Goal!!” we teachers both yelled in our minds. But it was not quite over. The opposing goalkeeper soared backwards and with a despairing left hand just managed to flick out at the ball. He diverted it upwards, and it flew onto the crossbar and behind the goal for a corner.

Chris Ingle got up and wiped the mud from his hands down the front of his white shirt. Tony Slack turned to me and said, “You wouldn’t see anything better than that in the First Division.” And he was right.

And, in case you missed it, here’s that fabulous save again… 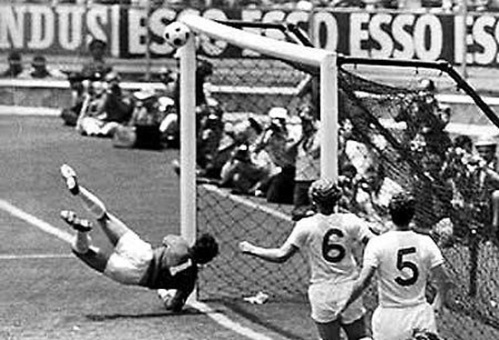