A Twitch to Kent : Day One

Friday, October 14th, 1988
This is a new venture for me. A minibus trip, to Kent for a whole weekend. Surely we’ll get to see something. I am looking forward to a chance to see the famous Glossy Ibis:

I may possibly get a glimpse of Ring-necked Parakeet, if we’re lucky:

They’re a lot better close up: 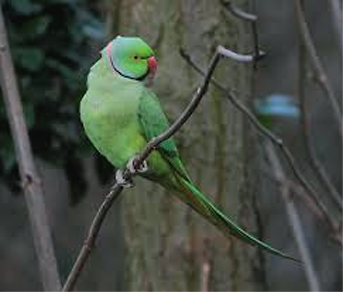 There’s also a fair number of other birds scattered around the country and I start an exciting war of nerves in the minibus, trying to persuade everybody that it would be an extremely good idea to call in and see them all.

I have taken the unpardonable sin of producing a dozen photocopies of an article about the habits of the Stodmarsh Glossy Ibis. A lot of people who had up to now never heard of the bird, are soon warming to the idea of going to see it. A mention of the Isabelline Shrike however, is not quite as successful, since almost all my fellow passengers have a very accurate idea of just how far away Dorset is.

On the Saturday afternoon we move over to Stodmarsh, where by now, we all expect to see the Glossy Ibis, flying over our heads on its way to roost, as it is supposed to do every single night. It can be seen flying in over the Lampen Wall. But just what is a Lampen, and why do we need to be protected from it? 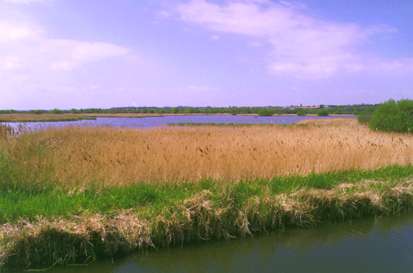 In the late afternoon, the reserve doesn’t really have a lot on show. I wait in vain for a Cetti’s Warbler, a bird, that to my eternal shame, I have yet to see, although I have heard a lot singing in Norfolk.
The Stodmarsh logbook by the car park says that the Ibis came in to roost at 4 o’clock the previous evening. That’s a bit of a frightening thought, because we don’t manage to get there until 4.15 and I have the horrible nagging feeling that we have all missed it .
The minutes tick by as we wait for the bird. We get more and more worried. At least, the
serious birdwatchers do. Some of our fellow travellers act as if there is a Glossy Ibis resident in every county in the British Isles, instead of just one single, lost, bird in the whole country.

5.00. Nothing
We get so desperate that Paul puts into operation the ultimate birdwatching spell. He inserts his index finger into the handle of his tripod, followed by the whispered recital of the bird’s Latin name. The spell works a lot better if you haven’t looked up the Latin beforehand, but actually know it anyway.
And of course it works. Within a few short minutes, Wayne is shouting, “I think I’ve got it.”

And just for once, he is actually right.

The bird flies over, circles a few times, and finally drops down into the reeds, presumably into its roosting place.

It is supposed in all the books to be particularly primitive looking, but I think it’s absolutely superb. It has rounded wings which seemed almost transparent against the light of the sky, and its improbably long bill balances perfectly the dangling legs. And it is is nowhere near as awkward in flight as the descriptions would have you believe. It circles around us, light and graceful. It even earns a spontaneous round of applause from its admirers. It is certainly the best bird I’ve seen so far in my very short birdwatching career. Easily.

Nowadays, with the alleged advent of Global Warming, the Glossy Ibis, usually a bird of Southern Europe, is being seen with increased frequency in England. A little while back, one even came to spend a few weeks in a wet field down by the River Trent in Nottinghamshire: 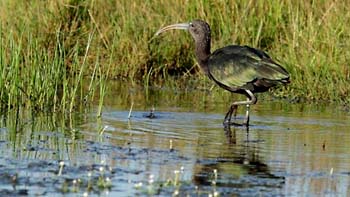