The Mosquito at Hendon (2)

Last time, I wrote about the De Havilland Mosquito at the RAF Museum at Hendon. This individual is painted as a Mosquito B.35, TJ138, in 98 Squadron markings, reflecting the squadron’s time spent at Celle in Lower Saxony, flying Mosquitoes during the occupation of West Germany from 1945-1951:

The squadron badge is Cerberus, the 3 Headed guardian of Hell because, quoting the RAF website:

“This squadron claims to have barred the way (front and rear) during the German retreat in 1918 and so considered Cerberus, as the watchdog of Hades, a suitable badge.”

I don’t understand that to be honest, but if the RAF are happy with it, then so am I.

And I’ve never known what that ridge along the fuselage was for:

A bit closer. You can see why Mosquito crews had to be careful of these propellers. They are so close to the fuselage:

And even closer up:

The Mosquito was capable of carrying 4,000 lbs of bombs. Best of all, it had an uninterrupted bomb bay, with no struts or barriers to prevent the aircraft from carrying a 4,000lb Cookie. That meant that two Mosquitoes and the four men in them could carry the same as a B-17 with 10 men. A Lancaster carried 14,000lb with 7 men, the only heavy bomber capable of outdoing the Mosquito in this kind of contest.

Here’s one of the two very powerful Merlin engines. Behind it, something so modern and so boring that nobody would want to fly it:

Did you spot the mystery item behind the Mosquito on the left? My guess is that it is part of the lighting system or perhaps a flying Stealth Lawnmower invisible to radar.

Here’s where the bombardier sat. The next time you watch “633 Squadron”, notice how the inaccurate swines have painted over the Perspex in a vain effort to disguise a bomber pure and simple as a fighter bomber with four cannons: 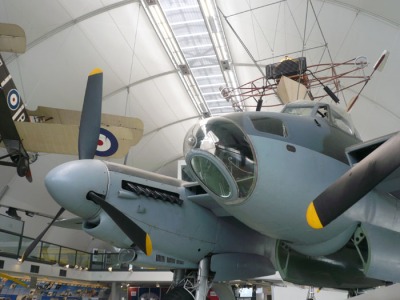 It’s so shocking and so obvious when you look at it:

One thing you can be sure of though. This particular Mosquito was not in “633 Squadron”, surely the only flying Mosquito in the world that was not used. Perhaps it was an economy measure. The owners of all those different Mosquitoes did charge a whopping £2 a day to rent one.

The last photograph shows two people (not with me) and three other aircraft. One is Japanese and if it’s not a Kawasaki Ki 100 then I don’t know what it is. The World War I aircraft top right, I really don’t know what that is, either. I’ve just forgotten. Perhaps an SE5?

The aircraft on the left has the distinctive tail of the Fokker DVII and guess what? It is one! 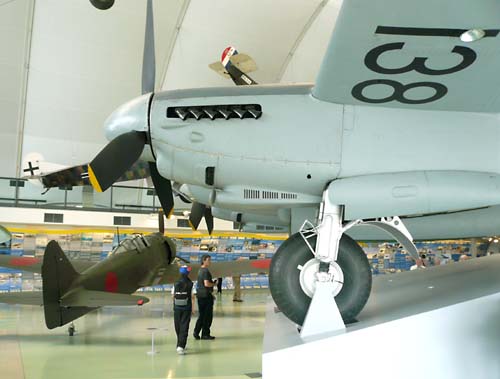 A note to say that my hand is now capable of a little light typing so I have managed to catch up on my replies to all the kind comments you made on my previous six blog posts. From now on, it should be back to normal, although I am well aware that operations go in pairs, and it will only be a matter of time until the right hand needs a full service.