The Mosquito at Duxford

I made that one up myself.  If I had a time machine, I could send it back in time to 1944.  Well, they had to do something to amuse themselves while they waited for limited overs cricket to be invented. My final Mosquito is actually the one I saw first of the three. It is the Mosquito at Duxford, which is near Cambridge.

Its registration number is TA719 and it is now a Target Tug, a TT.35 to be precise. It has had better days, especially when it was built in June 1945 and the cunning plan was for it to be a Mark 35 bomber.

Its greatest glory days came though, when, like its friend at Cosford, it took part in 633 Squadron. At that time, the aircraft had been demobbed, had left the RAF and had become a Bird of Peace, a civil aircraft with the lettering G-ASKC.
The next Mosquito film made after 633 Squadron always tends to be forgotten. It was not a sequel but just a film that was produced because all the matériel for a war film with Mosquitoes was at hand. And the daily rent for an airworthy Mosquito was just £2. The film’s plot verged on the ridiculous but the flying was good. It was called Mosquito Squadron and let’s be honest, some critics did say that the acting was as wooden as the aircraft. If the film was poor (and here’s the poster)… 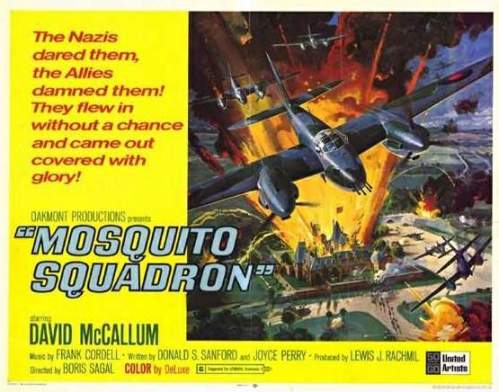 …the book cover was even worse. Can anybody see today’s deliberate mistake?

This is a strange photograph. It’s the best bits of a Mosquito on its way to Boreham Wood Film Studios:

TA719 has finally settled down at Duxford as a TT35 with the “Keep away!!!!” black and yellow stripes. These Mosquitoes were used to tow targets which always seem to me to have been merely a more sophisticated cousin of the airfield’s windsock. The towing cable could be extended as far as 6,000 feet but being a Target Tug was still a dangerous job with all those inexperienced potential fighter aces firing at a moving target.
Two last points about the Mosquito. So few are left because, being made of wood, they tended to fade away very quickly. Of nearly 8,000 only a few remain:

At least, the British Mosquito did not have the same problem as the German imitation , the Focke Wulf Ta 154. an aircraft where the glue wasn’t always right and the wings, quite literally, fell off: 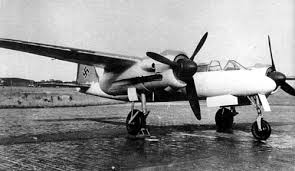 The loss rate of Mosquitoes to the enemy was very small, some 0.5 %, but the aircraft were sometimes dangerous to the crew. During a landing without undercarriage, the wood was little protection to the crew’s legs. And sometimes the proximity of the propeller blades to the side of the fuselage produced horrendous accidents with a tired crew getting out of the plane. Which brings me to a nice story about my Dad:

“One day at Lossiemouth in northern Scotland, a fine frosty clear blue winter’s day, a photo reconnaissance Mosquito came in for an emergency landing. The aircraft had been taking photographs over occupied Norway and was very badly damaged. Unarmed and made of wood for lightness and performance, it had no working undercarriage and scraped along the length of the runway, coming to an eventual stop in a cloud of smoke. Two men, Fred and an officer, ran out with fire axes. Despite the still whirling propellers they both jumped up onto the smoking aircraft and smashed the Perspex of the canopy. They dragged out the two members of the crew.
For this gallant deed, the officer received a medal. Fred did not, and the episode confirmed his belief that rank and class counted for a hell of a lot in the RAF at that time.”

This event cannot now be dated and, conceivably, it was connected with 617 Squadron’s attempts to bomb the Tirpitz. Here’s Lossiemouth, then and now:

Indeed, if Fred’s memory was playing him just slightly false some five decades after the event, it may well have been that this unfortunate aircraft was actually one of 617 Squadron’s own Mosquitoes. These twin engined planes were used, from 1944 onwards, to mark targets accurately before the rest of the squadron bombed them.

The Mosquito  at Duxford is painted in garish fashion. This was the closest I could get to going underneath it:

This view is very similar:

Here’s the view from the front:

This is perhaps very slightly better:

It was a pity my Dad wasn’t there to see this bit,. but it would probably have just set him off again. He just thought that whatever medals they got or did not get, it should have been the same for both of them: 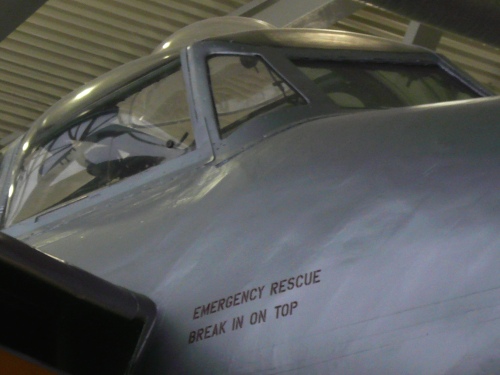 And here is an enlargement  of those ironic words: 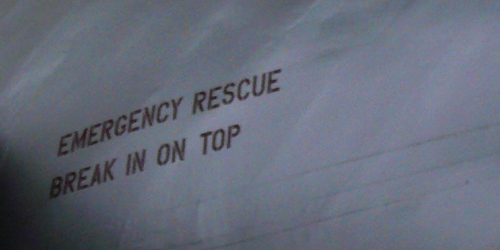 24 responses to “The Mosquito at Duxford”