Please don’t look at these blog posts and just think “I don’t like football” and then go on your merry way. All of these blog posts are about much more than football. In particular they concern the eternal battle between sporting genius and cream cakes.

Last time, I wrote about the “Match of the Century” played at Wembley between England and Hungary in 1953, a game which resulted in England’s first ever defeat at home by a foreign team.

The programme, of course, did not just contain details about the English players. There was a section of equal size, of course, for the Hungarian players: 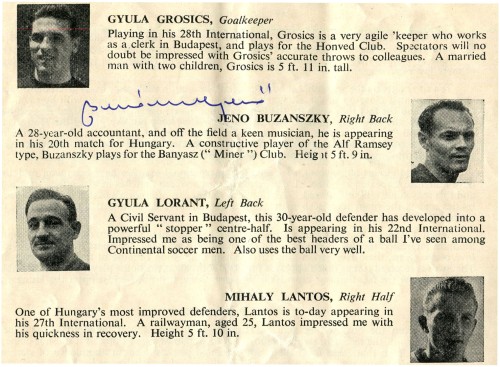 And there is the clue as to why the programme cost me more than might be expected. It has autographs in it. The one above, I presume, is Jeno Buzansky, although it looks as if he writes it as “BuzanskyJeno”. This is because he is not English, I expect, and has a different way of going about things. Here are the second lot of players:

No autographs here, although the players are quite famous in the world of football, especially Jozsef Bozsik, who was a Member of Parliament, and Sandor Kocsis who was very naughty because he was one of the rascally Hungarian forwards who would not stay in position so that the England players could mark him. On to No 3:

This section bears the great man’s autograph, written as PuskásFerenc. Notice that the English writer, John Graydon, is well aware of his nickname of “The Galloping Major” which had been a popular song in 1906, the same year as Puskás’ grandfather had been born. The man at the top, Nandor Hidegkuti, was, I believe, the key to England’s disastrous performance. He was the Hungarian centre forward but stubbornly refused to play where a centre forward was supposed to play. That in turn meant that the England defence did not know what to do. They did not know who to mark. When they asked the coach if they should change their own formation, he replied that he didn’t know what to do either and he told them to carry on, it would all come out OK eventually, so don’t worry lads, fingers crossed.  Here’s the last of the pen pictures: 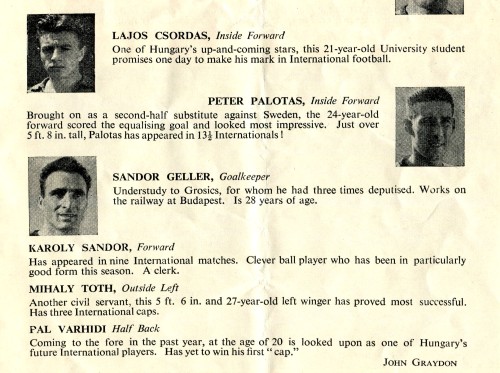 That meant that the teams lined up as, for England:

And for the Hungarians: 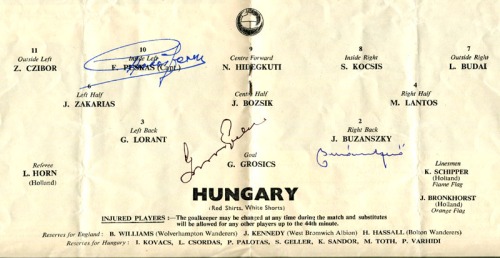 And yes, three more autographs. PuskásFerenc and BuzanskyJeno and a new one, the goalkeeper, Gyula Grosics, or GrosicsGyula as he liked to sign himself.

The attendance was 105,000 spectators . This was one of the biggest accurately counted crowds ever recorded in England.  Any number of managers of First Division clubs always claimed to have been there but of course, there is no way of checking now. The game started badly for England and got worse after that. The scores went, from England’s point of view, 0-1, 1-1 (hurrah!), 1-2, 1-3, 1-4, 2-4 (hurrah!), half time, 2-5, 2-6, 3-6. The game was filmed, and as I have already mentioned, it is available on DVD, although, shop around…ebay can be very expensive.

Here are some photographs from the match: 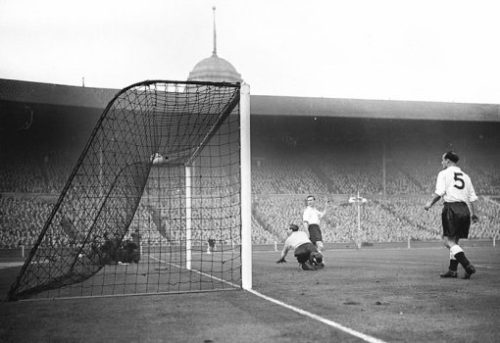 Some editions of the film of the game have only eight of the nine goals in the main match, If you are lucky, the makers of your DVD will have contacted Pathé News to make use their film of the missing goal as an ‘extra’.

Here’s one film about the game from gr8footy:

And here’s the full match version. The commentary is in Hungarian but the picture is better than most (Yes, really!):

And the programme still manages to be helpful. Here’s how you can get home by train: