This time in Victor, it’s Coastal Command. Patrolling the Ocean Blue in their aircraft and bombing U-boats. Until the German anti aircraft gunners take a hand…. 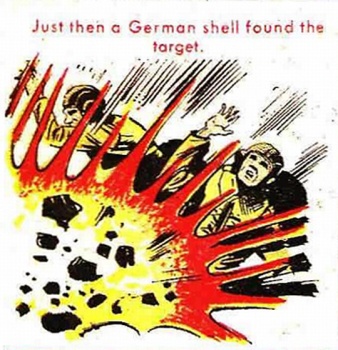 And that single event, that single exploding shell, seems to put a very abrupt end to all of the crew’s sentiments about peace on earth which might be talked about in church on a Sunday morning . We are moved on very quickly from love for our fellow man to an eye for an eye, a tooth for a tooth! And what about the words of the world’s most misspelled holy man, Gandhi? An eye for an eye and the whole world is blind?  All those lovely thoughts are completely knocked on the head. Literally. Vengeance is the order of the day. Just listen to what he says…..

And the next frame asks some very pertinent questions about staffing levels in the wartime RAF.

If we don’t need a bomb-aimer, then why did we bring one?

He could have been at home, spending his afternoon with his stamp album and his hinges, sticking in that German set with ships on, rather than bombing the real thing…. 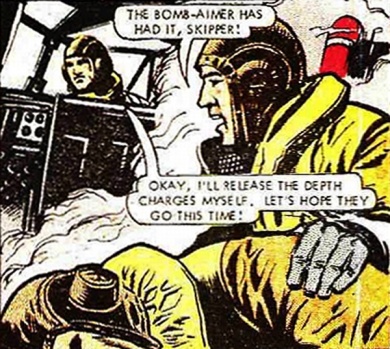 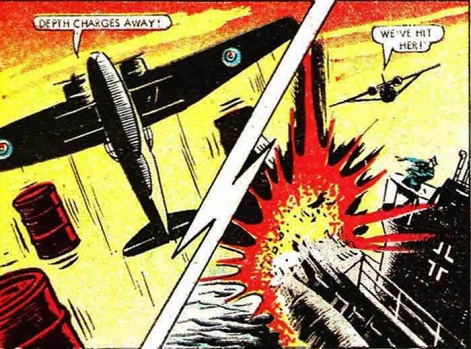 No real man likes a hand placed tenderly on his shoulder, even if he’s wounded.

Leave me alone and go and look after Jack, we’ve all been very worried about him…..

I’ve spent my whole life being a facetious commentator on life.

In actual fact, I am a great admirer of Victor comic and even as an adult, I can see lots of positive teachings within its heavily serrated pages.

Soooooo…it will be a Victor true story with no facetiousness whatsoever next time. Well, only a teeny weeny bit.