One of my very best friends, whom I have known since Infants’ School, has always been a keen photographer. In 1989 he decided to go to Berlin on one of those cheap European flights. As luggage, he took with him a camera and a large hammer. He wanted, I suppose, to help history along on its way:

By December 25, 1991, the desire for change had spread to the USSR. The Soviet hammer and sickle flag over the Kremlin was pulled down for the last time. Mikhail Gorbachev, a good man, was replaced by Boris Yeltsin.

And the world that Aleesa and Vladimir had known all their lives comes crashing down. For years and years, Aleesa has come into the office with her Party dues. She has paid her money every single month without fail, to the only organisation she has ever belonged to. And then, she goes along to pay for May 1990, perhaps thinking it will help with the cost of the celebrations to mark the end of the Great Patriotic War on May 8th or perhaps even May Day itself. The day which celebrates the Workers of the World. But the Party is over. Gone for ever:

Vladimir will experience exactly the same process. He goes in one day to pay his 1 rouble 13 kopecks and there’s nobody to take it from him. Why, they’ve even written the next year on the blank page, so certain were they both that the Party would be there for ever: 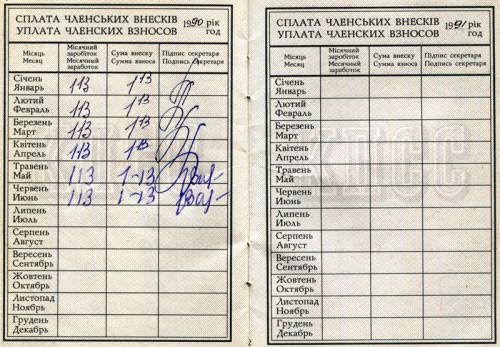 But now, there are just lots and lots of blank pages, each with the number of a future year already inked in in the top right hand corner. Life though, has changed for ever:

“Zolochevskiy” was there though, but the stories were all reported with the kind of vocabulary such as:

How sad. The Party fades away and is replaced by something lots, lots worse. And that’s not just the Ukraine, of course. Plenty of other ex-members of the Soviet club are much, much worse off than they ever were before. Whole countries run by criminal elements. Fixed elections. Old people forced to beg in the streets because their pension funds have been stolen.

Don’t worry though. I’m sure that somebody will come along and save them all: