The World of the Mysterious (2)

I said last time that I would take my thermal imaging camera into history and legend to see if I could find any intimations that creatures similar to Bigfoot were mentioned over the course of the last 5,000 years or so: 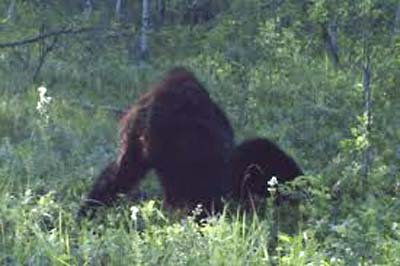 Have you ever read “The Epic of  Gilgamesh”? It is a fantastic tale of adventure, demons, despotism, eternal life, physical beauty, the secrets of the gods, sex, temple prostitutes, a twin-peaked mountain and bull wrestling. And that’s only about two thirds of the plot. It makes “Lust in the Dust” look like Jane Austen. No wonder there’s a statue of him at Sydney University: 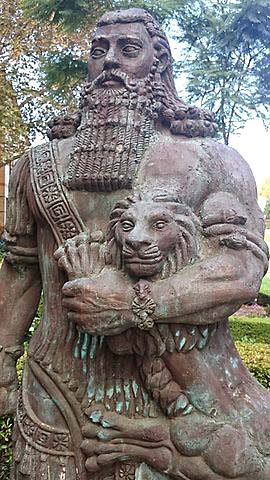 The hero of the epic, Gilgamesh, was probably a real king who came from Sumeria, present day Iraq, in around 2800-2500 BC. He has a companion called Enkidu who, for me, is based on knowledge of a Bigfoot type ape. Enkidu was deliberately created by the god Anu as one third human and two thirds beast. He was suckled by the animals and he is portrayed as being brawny, “endowed with strength”, hairy and he wears animal skins as garments. Wearing tattered clothes is a frequent epithet in many early reports of Bigfoot from North America.

But why does Enkidu bother with animal skins? We know from other descriptions of him in the book that he was completely covered in shaggy hair, all over his body. He must have looked fairly terrifying because when an ordinary human, an animal trapper, first meets Enkidu, the author says that the “trapper’s face was stark with fear”. This is a common element of Bigfoot encounters, not surprisingly, perhaps! Here is Enkidu vanquishing the bull of Heaven:

Enkidu has responsibility for protecting the animals, but he also lives among them as an animal himself. This is the reason that he is portrayed with what look to be cows’ horns and ears, and in the next illustration, hooves: 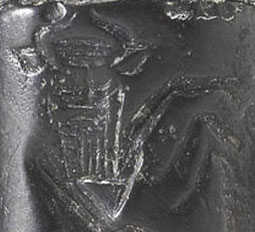 Much more like Bigfoot are his hairy legs. Don’t miss the hooves: 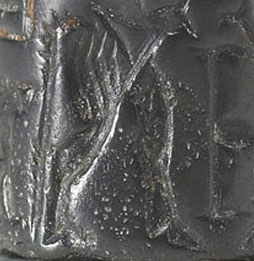 One interesting feature of Enkidu is that he was fashioned entirely from clay and he has no soul. Man, of course, is fashioned from clay but he does have a soul, given to him by the breath of God during his creation process. No soul, of course, and you might become a Golem, another gigantic creature from, very roughly, the same part of the world.

The only detail lacking with Enkidu is the huge stature but it must not be forgotten that a very high proportion of Bigfoot encounters in the early days of the USA concerned beings of the same size as a man.  Very often they had the remnants of tatty clothes on them but there always was that covering of fur. I just can’t get over Enkidu’s hairy legs! :

The descriptions of Enkidu certainly tick a lot of boxes for his being based on a Bigfoot type creature, something which, thousands of years ago, roamed, perhaps, forests now long cut down, or even the marshes of Iraq. These now largely drained areas were once the largest wetlands in Western Eurasia.

“The Epic of Gilgamesh” is available for free at :

I selected the Pdf and then right clicked and went to “save target as” which means that I could choose which folder to put it in.
The book is also available at http://www.gutenberg.org/ebooks/18897
Here, I right clicked on “Read this book online: HTML” which again allows me to decide where it goes.
This version is not as good as the previous one, which is excellent, and I’m not sure that it is complete, but it does have text in Ancient Sumerian , transliterated into English form. So…….

“Gilgamish arose interpreting dreams,
addressing his mother.
“My mother! during my night
I, having become lusty, wandered about
in the midst of omens.
And there came out stars in the heavens,
Like a … of heaven he fell upon me.
I bore him but he was too heavy for me.
He bore a net but I was not able to bear it.
I summoned the land to assemble unto him,
that heroes might kiss his feet.”

It’s certainly something for the kids to think about for “Show and tell”.