The World of the Mysterious (6)

England has its own figure which may well look back to the days when ordinary people were all aware that there was something big and hairy in the woods. After all, centuries ago, woodland was far more plentiful and farmers’ fields would often be next to the forest. So too, there were many more hunters then and they would all have known what you might encounter as you moved silently around among the trees.
In England he was called the “Wodewose” and he is usually depicted as a human like creature, somewhat bigger than a man, often carrying a club, and almost completely covered in thick hair:

Over the years, in heraldry, he was depicted in increasingly human form, still carrying a club, but with leaves wrapped around his haunches. I think that that is probably because people saw the Wodewose a lot less frequently as the human population increased and the Wodewoses became less numerous. Even so, judging by the heraldry of the medieval period and later, there may well have been wild men in, as a minimum, the Czech Republic, Denmark, Finland, Germany, Italy, Lithuania, the Netherlands and Sweden: 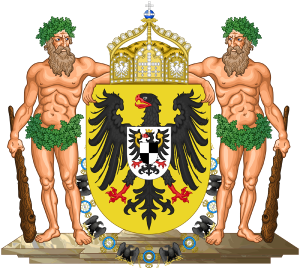 The name ‘wodewose’ comes from two old English words, “wudu” meaning ‘wood’ and “wāsa” which itself comes from the verb “wesan” or “wosan” meaning ‘to be alive’ or simply ‘to exist’ or ‘to be’. So he’s somebody who is in the woods. He is also seen a lot in medieval churches, but as a statue or a carving. This one doesn’t have a club:

But this one does: 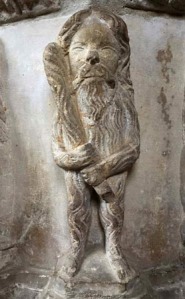 The Wodewose might be kneeling on the roof outside the church:

Or he might be on the roof inside. This Wodewose apparently has a touch of greenish mould, but then again, so do some Bigfoots: 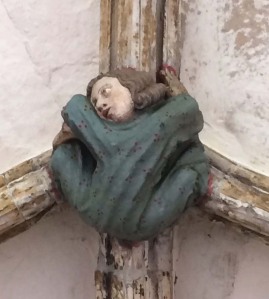 This one has a bit more of a tan:

Here’s a German one from Cologne: 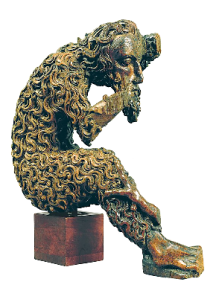 And another from Suffolk:

This one has had to adopt a strange position just to get all of him in:

For me, the Wodewose can trace his lineage back to a Bigfoot type creature that may well have still been alive and well in the vast forests of Western Europe as late as the early Middle Ages. At this time, up to half of England was covered in forest. People used to say that you could travel from the Humber to the Thames without touching the ground because there were so many trees. And when the Wodewose had disappeared for ever, there were  still plenty of people who had heard all the tales about him and who could recreate him in their own world.

One final point is that in these blog posts about Bigfoot, I have tried very hard to use only images which are available and there to be used. With some images that is not the case, but the problem was that there was nothing else available. I am 100% willing to take any images down if this causes a problem for anybody, although I suppose there is the flattering aspect that they were the best I could find on the whole Internet!