“What would you do ?” used to figure on the cover of a comic called “Boys’ World”. This was a publication, obviously, aimed at boys and first appeared on January 26th 1963, priced sixpence in pre-decimal money, two and a half pence in today’s money. There were 89 issues before the comic was merged with Eagle in 1964. The last issue of “Boys’ World” came out on October 3rd 1964. Here is the Eagle for that very same day. It seems to have swallowed “Boys’ World” without even noticing:

I used to buy “Boys’ World”, and this was mainly for the front cover which always featured a kind of puzzle. It was called “What would you do ?” and was based on somebody being in what Ned Flanders would call “A dilly of a pickle”. Here’s the great man:

Here’s the front cover with the situation for “What would you do ?”

The yellow box sets the scene, and the task is for you to solve the situation. Perhaps you might like to write your idea in the “Comments” section. Here’s the yellow box enlarged: 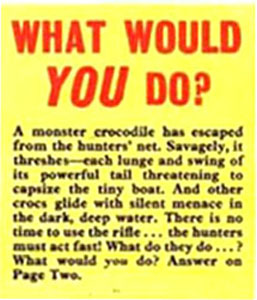 The monster crocodile has escaped and is thrashing about in the boat. The canoe’s occupants are threatened therefore with a capsize. There are more crocs in the water and there’s no time to use the rifle. There is, though, a clear need to act fast.