“What would you do ?” used to figure on the cover of a boys’ comic called “Boys’ World”. This was a publication, obviously, aimed at boys, and first appeared on January 26th 1963. There were 89 issues before the comic was merged with Eagle on October 3rd 1964.

I used to buy “Boys’ World”, and this was mainly for the front cover which always featured a kind of puzzle.

It was called “What would you do ?” and was based on somebody being in what Ned Flanders would call “A dilly of a pickle”. Here’s the situation, as always, explained in the coloured box: 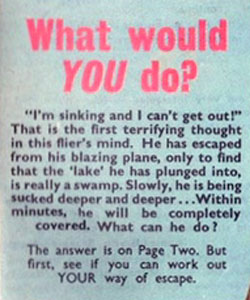 And the correct solution given on page 2 of the comic is:

“The crashed pilot took off his jacket and spread it across the swamp before him. He then leaned forward on the jacket, reaching for firm ground. In this way he eased his way to safety . For the jacket acted as a kind of platform, enabling the pilot to distribute his weight more evenly. Snowshoes act in much the same way on soft, deep snow.”

Now personally, I don’t think this would work. I think that the first time you put your jacket down it would disappear into the swamp and you’d lose it for ever. My solution, if it qualifies as such, was based on lying very still in the water/mud etc and hopefully finding a small log to act as a float. Even better would be to have an aircraft with a inflatable dinghy in the wing and to know how to find it, release it and paddle away.

I did a blogpost about this a good while ago. It was called “The Luckiest Man in the World” (4) and concerned Tom Weightman, an RAF rear gunner who survived a crash on a lake in Norway because he knew where the aircraft’s dinghy was stored, unlike his six colleagues who all perished trying to swim to shore. You can find the story here.

This was not the first time that Tom had been the only survivor. Read how he escaped a fatal crash at Dilhorne near Stoke some time previously here.

Filed under Aviation, Wildlife and Nature