The Avro Lincoln at RAF Cosford

During a recent visit to the museum at RAF Cosford, I was able, as a confirmed fan of the Avro Lancaster, to view its successor, the Avro Lincoln:

The Avro Lincoln flew for the first time in June 1944, just a few days after the Normandy landings. The first examples of the new bomber were actually called the Lancaster Mark IV and the Lancaster Mark V, but they were eventually rechristened the Lincoln Mark I and the Lincoln Mark II. The new aircraft was the last bomber in the RAF with good old-fashioned piston engines and proper propellers:

The theory was that the Lincoln would be used in “Tiger Force”, Bomber Command’s contribution to a potentially catastrophic invasion of Japan in 1946. The bombers would have acted, presumably, as the RAF’s equivalent of the B-29 Superfortress or the much less well known Consolidated B-32 Dominator. Here is a B-29, “Fifi”, sadly the only example left flying from the 3,790 constructed:

This is the little known B-32, the aircraft which actually flew the last combat mission of World War 2. Only 1156 of these bombers were ever built:

At the time of “Tiger Force”, my Dad had already had all his medical injections for this next phase of the war, and the squadron’s Lancasters were all being crated up to be transported out to the Far East. Then suddenly, the Americans dropped their two atomic bombs and the war finally came to an end.
The Lincoln was certainly an improvement on the Lancaster, but the performance figures given in Wikipedia are not particularly startling, with bomb loads, aircraft size and speeds all roughly similar.  Here is the capacious bomb bay:

The range of the Lincoln was greater than its predecessor, and the maximum speed was an improvement, with the aircraft able to cruise happily at 215 mph.  Similarly, the service ceiling and the rate of climb were better than the Lancaster.
Eventually, more than six hundred Lincolns were to be manufactured, with a further 73 in Australia where it was the largest aircraft ever to be built there.

This photograph comes from a splendid Australian website where you can learn, more or less, to fly a Lincoln, especially the long nosed version, the Mark 31. Every single one also contains two or three  of the author’s laugh-out-loud feelings about life. My favourite one is:

“Going to church doesn’t make you a Christian, any more than standing in a garage makes you a car.”

Just one single Avro Lincoln was constructed in Canada. Here it is: 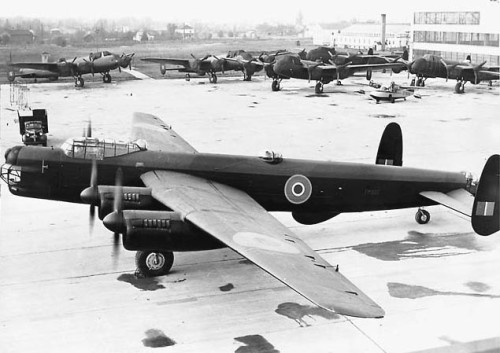 With the RAF, the Lincoln was used in the 1950s to oppose the Mau Mau terrorists/freedom fighters in Kenya. You can read the story for yourself, but I do love the British evaluation of the Mau Mau by Dr. John Colin Carothers as

“an irrational force of evil, dominated by bestial impulses and influenced by world communism”

I also enjoyed the description of the traitorous Africans who continued to support the nasty British as:

“the running dogs of British Imperialism”

The Avro Lincoln was also employed against terrorists/freedom fighters who operated in Malaya (now Malaysia). They too were influenced by world communism, although they were unable to import any running dogs of British Imperialism because of the rather strict customs regulations in force at the time.

All of that history is fairly predictable, except for the sad story of the single Avro Lincoln (RF531 “C”) which was shot down by the Soviet Air Force.  The bomber was attacked by a MiG-15 fighter on its way to Berlin on March 12th 1953. This is a MiG-15:

The Lincoln was being flown by members of the Central Gunnery School at Leconfield in Yorkshire, and all seven of the crew were killed. The whole very sad, rather ghastly tale, is told on the Spyflight website. What a sad, sick waste of young men’s lives that was. There was just no need for it.

A lot further south, the use of the Avro Lincoln by the Argentine Air Force, the Fuerza Aérea Argentina is quite interesting:

This was, of course, the Revolución Libertadora which ousted Juan Peron and his wife Madonna.

(“She plays Evita with a poignant weariness and has more than just a bit of star quality. Love or hate Madonna-Eva, she is a magnet for all eyes.”)

Some things I just cannot resist. Nobody could:

One interesting feature about these ageing South American bombers was that both the Lancasters and the Lincolns in Argentina were serviced, and kept viable, for many, many, years, by ex-Luftwaffe engineers.  For some unknown reason, they had all decided to leave the Fatherland in 1945 to live out the rest of their sad lives in South America:

I was fascinated to read as well that Avro Lincolns were used to support the Argentinian bases in the Antarctic. One aircraft therefore, was flown back to Avro in England. Engineers there added a civilian nose and tail, removed all armament, and put in generous extra fuel tanks. Registered as a civil airliner called the Cruz del Sur, the aircraft dropped supplies to the Antarctic San Martín Base from December 1951 onwards:

Sixty or so years later, the Argentinians still have two Avro Lincolns preserved. You have already seen two photographs of one of them. Here is another: 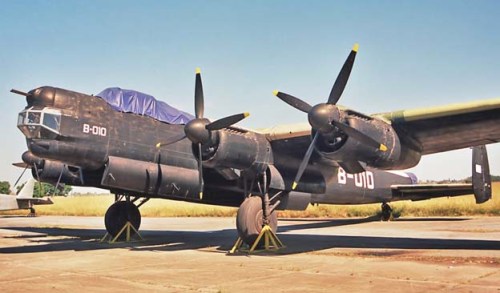 The Australians have one of their Lincolns in storage for restoration in the future, and there is also the aircraft that we all saw at RAF Cosford, with its rather disconcerting blue bosses to the propellers:

And, as far as I know, that’s it! What a wonderful regard we have for preserving RAF aircraft. Are we embarrassed that we were ever forced to use them in anger?