Yet again, the Date-Book of Remarkable Memorable Events Connected With Nottingham and Its Neighbourhood 1750-1879 comes up with the goods.  Ands today you’ll see just how appropriate is the name of the author, John Frost Sutton. Once again, I have tried to simplify some of the more archaic language.

A great fall of snow and intense cold. Drivers of vehicles found it impossible to complete their journeys, and the stagecoach to London was stopped halfway to the capital, and was unable to proceed.”

Here is the type of stagecoach we are talking about. It’s not really one for the Apaches to chase:

“A contemporary record states that the road beyond Northampton “was crowded with the passengers from the north, all of whom had been detained there all the week, owing to the great depth of snow. Many of them had neglected to make any provision for what had happened, and were in the greatest distress. On the other hand, some, who were well supplied with the one thing they really cherished, lived happily at the nearest public or farm houses. They were literally in high spirits. Almost every house on the road exhibited either a happy picture of noise and merriment, or else showed the visible signs of vexation, disappointment, and humiliation.”

“On January 13th, two men were returning in the evening from Nottingham to Papplewick, when they were overcome by the cold, half-way between Redhill and their place of destination. In the morning, one of them was found stretched out on the snow and dead. The other was found in a state of insensibility, with his stiffened arms clasping the trunk of a tree, and icicles at the end of his fingers. With much difficulty his life was preserved.”

The orange arrow points to Redhill, and Papplewick is in the top left corner: 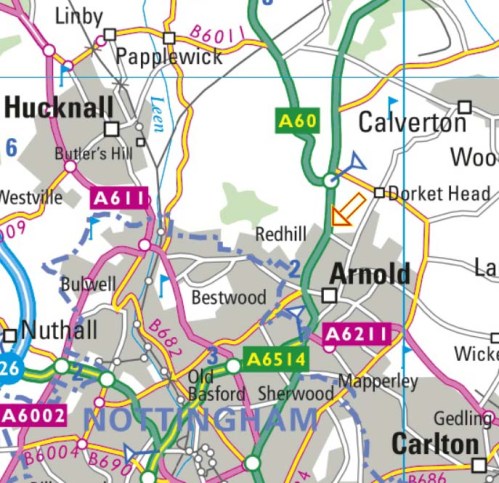 “The same day another sufferer was rescued from death by Mr Turner, a Nottingham attorney. A young woman in the service of Mr Lee, of the Peacock Tavern, near St. Peter’s Church in the middle of Nottingham, had been to Leeds on a visit to her friends, and was returning to Nottingham.”

Here is St Peter’s Church in Nottingham, down near the Broadmarsh Shopping Centre. The building to the right will one day be Marks & Spencer but it doesn’t really know it yet: 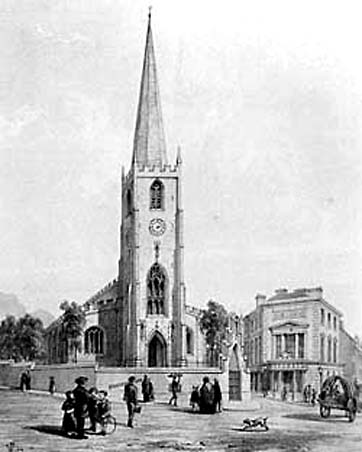 The young woman left Leeds as a passenger on the outside of the coach as it was so much cheaper (although a lot colder, of course).

“About midway between Leeds and Nottingham, some thirty miles from the latter town, the tremendous fall of snow rendered it impossible for the coach to proceed any further, and the young woman, not having enough money to stay where she was, set out resolutely on foot. She managed to reach The Hutt, on the road from Mansfield to Nottingham, when her strength totally failed, and she lay down to die.”

Here is the Hutt nowadays. It figured in a previous article when a White Stork flew over it: 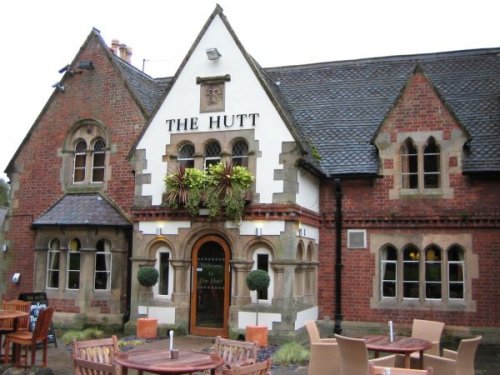 On this map, the orange arrow indicates the Hutt. The immediate area is no longer as isolated or countrified as it would have been in 1766. Redhill and Arnold are both in the bottom right corner: 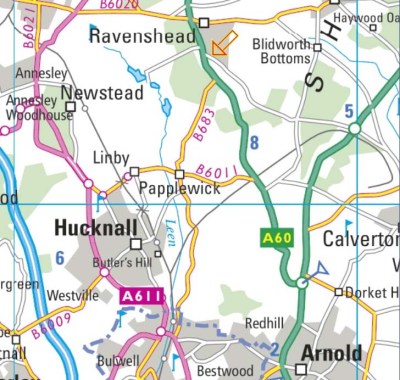 “In the hour of her extremity Mr Turner the solicitor happened to be passing that way on horseback, and prompted by humanity, lifted her up, took off his greatcoat and wrapped her in it. He put his gloves onto her hands, and with great difficulty succeeded in carrying her to Redhill, where she was properly taken care of at his expense until sufficiently recovered to be brought to Nottingham.”

I included this bit of the account because there are not many stories where a lawyer is the hero, especially a generous one. This is the “Ram Inn”, an old coaching inn at Redhill. It faces west so it is not easy to photograph and get much light on the subject:

Right next to it is the Waggon and Horses, another coaching inn of the period:

Two pubs next to each other is fabulously convenient. When the barman in one pub refuses to serve you because you are too drunk, you can just leave quietly and try your luck next door.