Last time, we were looking at some poems from the book “These – Our Children”, by Anthony Richardson, published in 1943:

“At a party” and “Grounded” are a pair of poems that go together.

In “At a party”, an heroic airman is in attendance, complete with his braid and his medal ribbon. But it was just fate, just luck, that saved his life. It was certainly not his own courage. Somehow Death fumbled and failed to pull him through the door.

The airman, though, does not have the appearance of anybody who has been so close to death that his past life has flashed past his eyes. But his companion knows nevertheless, that fear eats at his heart, that he has not yet managed to kill “those groping, grey cold thoughts” that would “paralyse his stubborn will” to do any more flying. Was she the only one to notice? Was she the only one to know that his cup was full, that he’d had enough, and that his lips were not laughing but anguished ? 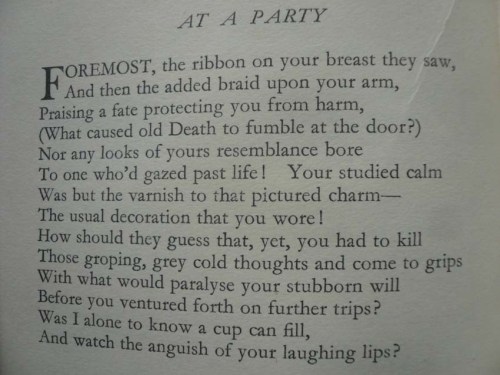 “Grounded” is the poem where the airman, completely unable to carry on, has had to be taken off flying. Despite this, he does not have to stand aside. He has been forgiven by “these captains”, other heroes who understand that it is “no disgrace that boldly one confessed he was afraid!”

Members of Bomber Command, my own father included, were absolutely terrified of being thought a coward. This meant that they would have “LMF” stamped on their record. LMF stood for “Lack of Moral Fibre”, and it meant that you would be extracted from your airbase as quickly as was humanly possible, lest other pe0ple catch your infection. You might be sent to a psychiatric establishment, such as used to be at Rauceby Warren in Lincolnshire, for example. Nowadays, it’s a long abandoned building:

In contrast, in the poem, “these captains”, are completely willing to have the frightened airman among their company because they know their own torments, and that “thus, but for God’s grace, goes any man?”

In actual fact, of the officers who survived the Bomber War, apparently 3% had been removed from flying because of LMF. That must have been quite a number of men. Being classified LMF signed a death warrant to any officers’ subsequent career in the RAF. And the RAF for their part took away the flying badge of any man with LMF “to prevent his getting a lucrative job as a pilot in civil life”.

“Black Marketeer” is self-evident. I know from my own father that the cowards who ran away from the war, and those who invented spurious health reasons not to be where the bullets were flying, were hated beyond belief by those who did their fighting for them. Even more hated were those who traded in forbidden goods such as whisky, cigarettes, petrol and so on. Most men in the RAF would not have hesitated in the slightest to have shot them, given half a chance. At the very least, they would have wanted their prison spell to have been twenty years in hell: 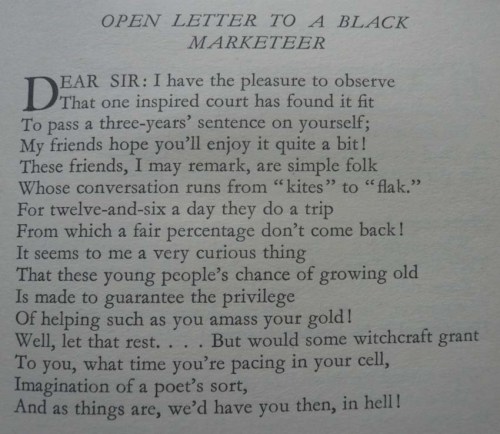 “Kites”, incidentally, is the RAF slang for aircraft, and “flak” is anti-aircraft fire, or, as the Germans so beautifully put it, “Flugzeugabwehrkanone”.

“Ground Crew” is another self-evident poem. The ground crew were the men who looked after the bombers and made sure that they would fly properly. Many of their duties are listed in the poem. In the second verse, the last two lines mean the occasions when the member of ground crew has to adjust the engines that make the aircraft fly: 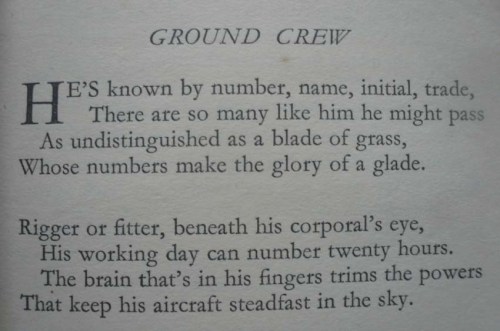 Ground crew were normally called “erks” which was supposedly the Cockney shortened form of “aircraftman”. “Wings” are the badge of the pilot, and traditionally have a silver threepenny bit sewn behind them. A “gong” is a medal.

The member of ground crew, the “erk”, was the “ordinary man” whose contribution to the war was absolutely indispensable:

And finally, his hearing is so finely tuned that he can hear the first of the bombers to come back from the previous night’s raid: