You have three minutes to learn to swim

In a previous blogpost I spoke about the Great Storm of 1703. Just under a hundred years previously, in 1607, there had been a huge, spectacular, surging flood in the West Country, centred on the Bristol Channel and the Severn Estuary. Much damage was done, in particular to the area near the orange arrow:

The floodwaters which struck on January 30th were in no way the result of a long period of continuous rain, such as has been the case in the recent years of our own century. Indeed contemporary writers stated that:

“The winter was extremely warm and very much drying….even smaller brooks remained ice free. Already in February the sowing was performed, in the same time violets are to have flowered.”

It is always possible, of course, that this long ago catastrophe was the result of a sudden surge, caused by high tides and very strong winds, as has happened several times in Norfolk and Suffolk in the last two hundred years. Some meteorologists, though, have looked beyond this.

Contemporary scientists such as Professor Simon Hazlitt, and Australian geologist Ted Bryant therefore,postulated in their research paper in 2002 that the flooding was caused by a tsunami. Their evidence, other than presumably the immense volumes of water involved in the incident, are that various deposits of sand, pebbles and shells, scattered around the Severn Estuary, are compatible with having been brought from the open ocean.

Their explanation for this melodramatic event was an undersea landslide, or perhaps ocean slide, on the sea floor between Cornwall and Ireland.  Alternatively, there may have been some kind of earthquake, caused by fault lines in the sea somewhere to the southwest of the area.

Whatever the reason, the results were catastrophic. Water swept five miles inland around Bristol and all along the coast of South Wales from Pembrokeshire to Glamorgan and Monmouthshire. In the Somerset Levels, still the victims of flooding nowadays, some four hundred years later, the waters came as far as forty miles inland. Did they recreate the ancient Glastonbury when the waters turned the Tor into the legendary Avalon? 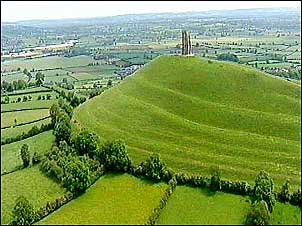 Certainly though, at Frampton on Severn in Gloucestershire, the flood covered the entire village so that only the spire of the church of St Mary the Virgin emerged from the water. There are some lovely details in this contemporary illustration:

At Burnham on Sea in Somerset, the sea wall was washed away and so were thirty villages in the immediate vicinity. In Huntspill, almost thirty people drowned, with a similar number perishing at Brean which was “swallowed up”. Here, seven out of the nine houses were destroyed: these were typical totals repeated in villages and small towns over the entire area, resulting ultimately in a death toll of at least two thousand people, and that in a fairly sparsely populated agricultural region. Other villages which were devastated included Berrow, Mark, Lympsham, and both South and East Brent were badly affected. Houses and villages were swept away, and overall, an estimated 200 square miles (51,800 ha) of farmland was inundated. Livestock was destroyed. For ten days the Church of All Saints at Kingston Seymour, near Weston-super-Mare, (look for the orange arrow) was filled with water to a depth of five feet (1.5 m): 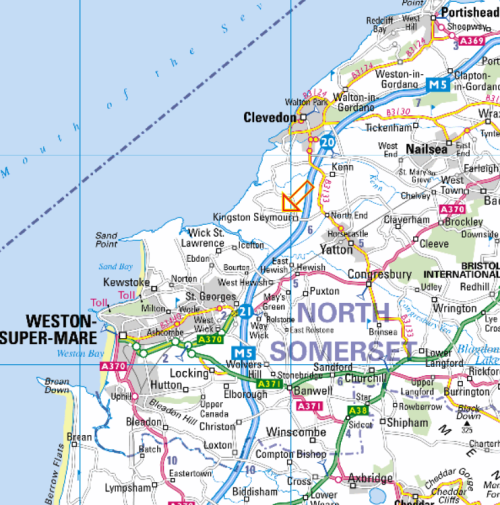 A chiselled mark remains showing that the maximum height of the water was more than 25 feet (7.74 metres) above sea level. The church has a commemorative plaque:

“An inundation of the sea water by overflowing and breaking down the Sea banks; happened in this Parish of Kingstone-Seamore, and many others adjoining; by reason whereof many Persons were drown’d and much Cattle and Goods, were lost: the water in the Church was five feet high and the greatest part lay on the ground about ten days. WILLIAM BOWER”

This plaque in the local St Mary’s church records the disaster at Goldcliff near Newport on the Welsh side of the Severn Estuary:

Initially, on the day, all was going well:

“for about nine of the morning, the same being most fayrely and brightly spred, many of the inhabitants of these countreys prepared themselves to their affayres”

Then the sea retreated away from the shore; in contemporary terms, it was “driven back”. This is apparently a classic sign of trouble ahead, tsunami  imminent, and sure enough:

“mighty hilles of water tombling over one another in such sort as if the greatest mountains in the world had overwhelmed the lowe villages or marshy grounds. Sometimes it dazzled many of the spectators that they imagined it had bin some fogge or mist coming with great swiftness towards them and with such a smoke as if mountains were all on fire, and to the view of some it seemed as if myriads of thousands of arrows had been shot forth all at one time.”

And there was no escape just by running away:

“(the water)is ‘affirmed to have runne …. with a swiftness so incredible, as that no gray-hounde could have escaped by running before them’.

For me, though, insofar as these events in 1607 are relatively soon after the appearance of the new King James Bible, I personally agree with the sentiments expressed in a contemporary pamphlet which was called: 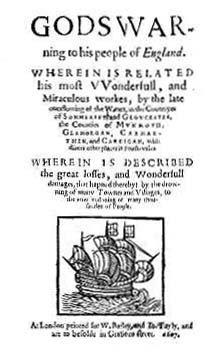 The familiar contemporary illustration quoted above also came from a pamphlet of the time:

Throughout the area, there were certainly some narrow escapes. Here are four contemporary accounts:

“a maide child, not passing the age of foure years: it is reported that the mother thereof, perceiving the waters to breake so fast into her house, and not being able to escape with it, and having no clothes on, set it upon a beame in the house, to save it from being drowned. And the waters rushing in a pace, a little chicken flew up, it being found in the bosome of it, when helpe came and by the heate thereof preserved the childe’s life”.

“Another little childe is affirmed to have been cast uppon land in a cradle, in which was nothing but a catte the which was discerned as it came floating to the shoare, to leape still from one side of the cradle unto the other, even as if she had been appointed steresman to preserve the small barke from the waves furie”

“A certain man and woman having taken a tree for their succour, espying nothing but death before their eyes, at last among other things which were carried along, they perceived a certain tubbe of great bignesse to come nearer and nearer unto them, until it rested upon that tree wherein they were, committed themselves, and were carried safe until they were cast upon the drie shore”.

“more than did, had perished for want of food, and extreme cold, had not the Rt. Honble. Lord Herbert …. sent out boats to relieve the distresse …. himself going to such houses as he could minister to their provision of meate and other necessaries”.

Nowadays, of course, this just could not happen. We keep a tight control of the weather:

Perhaps, though, the builders of medieval churches knew a little bit more than us:

Having said that, have no fear. Should a flood, or indeed, a tsunami, ever arrive, we will be helped by an army of graduates from the University of the Bleedin’ Obvious: