Renegade Football at the High School (5)

This photograph shows the First Team in the 1904-1905 season. It was taken at Mapperley Park Sports Ground, opposite the old Carrington Lido on Mansfield Road.

Sergeant Holmes is again present, and the players are….

On the right is twelfth man, F.C.Mahin. You can read about the incredible life of Frank Cadle Mahin in three of my previous blog posts.

I believe that the photograph was taken on the afternoon of Wednesday, October 12th 1904, just before the High School played against Mr.Hughes’ XI, perhaps to commemorate the game for the old Drill Sergeant. The School won 12-5, and we know that Cooper in defence was the outstanding player, but the whole team played well, and the forwards’ finishing was particularly deadly. This year, the team was amazingly successful. Their season began with victories by 5-4, 2-1, 23-0, 12-5, 9-0, 15-0, 3-1, 4-1, 11-0, 16-1. They had scored exactly 100 goals by November 3rd, in only ten games.

Notice that it is warm enough for the changing room windows to be open, and the design of the ball is still that old fashioned “Terry’s Chocolate Orange”. Horner has forgotten his football socks, and, because this game marked his début for the side, Fryer’s mother has not yet had the time to sew his school badge onto his shirt. Frank Mahin is, in actual fact, in the full School uniform of the time…a respectable suit or jacket, topped with a Sixth Form white straw boater, with a school ribbon around it. Here he is in American military uniform:

Football, though always, seems to have appealed to the rebellious nature of the boys. Even when it was a school sport, some of them wanted more, and they were quite prepared to break the rules of the High School to achieve that aim. The Prefects’ Book records how “an extraordinary meeting of the Prefects was held after morning school on November 23rd 1908”.

“… had complained about a cutting in the “Football Post” & “Nottingham
Journal”, stating that the High School had been beaten 5-1 by some unknown team called Notts Juniors, reported 8 boys out of IIIC, 1 out of IIIB, 1 out of IVB. The boys were Davie (J.R.), Herrick (R.L.W.), Gant (H.G.) Hemsley, Major, Parrott, Wilmot, Tyler, Cowlishaw & Sadler. They had played against a team of Board School boys down at Bridgford, under the name of Nottm High School Third Form. The other team had put the result in the paper. They were told that such teams must not be played, & that nothing must be sent to the papers except the results of 1st XI & 2nd XI matches.   Signed  AB Jordan”.

The School Archives also have a photograph of older boys in an unknown team.  Nobody has any real, definite and provable idea about who they might be. Perhaps they were something unofficial too: 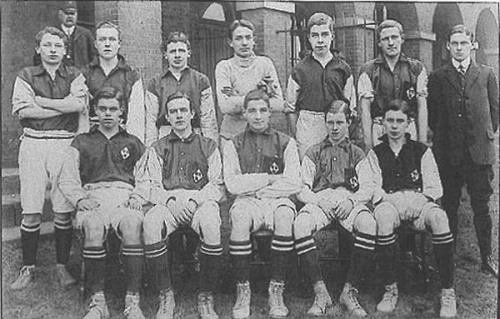 The man behind the team is not a known member of staff. Here he is:

Is the mystery man is one of  Haig’s staff officers from 1914, on an early lookout for likely cannon fodder for the Western Front? Why should I think that? Well, take a look at this photograph of a group of what were probably the cleverest, shrewdest military thinkers of their age, “Field Marshal Haig and the Blockheads”. Perhaps, front left, Tubby Watson?  : 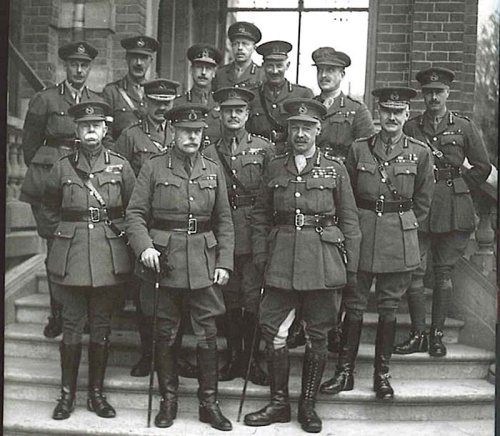 The next team photograph is not one I am particularly proud of. It is the sad result of the practise of using a camera to scan images because it is so much quicker. It appeared in the School Magazine a few years ago  and they seemed to have little knowledge of who it is:

“Is the above photograph a School Football Team of the early 1890s? The only proof that the team is the three merles badge on the shirt of one of the boys. The photograph is supplied by Don E Stocker (1926-1932) and his father EB Stocker (1889-1891). Is the man on the right a master or possibly Mr Onions, the groundsman and cricket coach?

Well, he’s neither a Master nor Mr Onions in my opinion:

And the badge may mean it is a High School team but not 100% definitely. It might be the only football shirt he has: 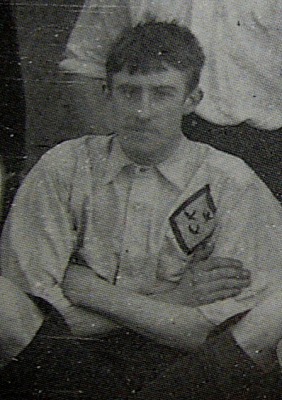 And surely, if it was a High School football team, more than one would be wearing a proper football shirt. As far as I can see, the majority of the players are wearing ordinary white shirts such as they might wear in the bank where they worked, or the technical drawing office.

I don’t think the team is pre-1900 either because the ball is made of 18 panels sewed together. Balls from this period tended to be like a Terry’s Chocolate Orange with lots of segments held in place by a circular piece of leather on either side. It may be a renegade team though, because School football stopped in 1914 and this photograph may well date from after that.

Renegade Football at the High School (1)

The High School plays rugby nowadays. Before this, they used to play football, (or soccer) and were very, very successful. They provided nine England players, who were Frank Ernest Burton, Arthur William Cursham, Henry Alfred Cursham, John Auger Dixon, Arthur Cooper Goodyer, John Edward Leighton, Tinsley Lindley, Harold Morse and Frederick William Chapman who was an Amateur international. Many of these Victorian superstars are now long forgotten. Who would recognise Arthur Goodyer if he walked in through the High School’s front gate? 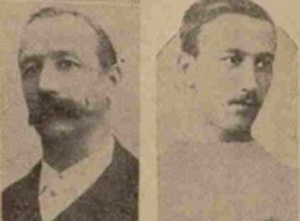 Three of these men captained England. One was Arthur William Cursham who captained his country on two occasions, namely against Scotland in 1878, when he scored a goal, and against Wales in 1879. His second goal for his country came against  Wales in 1883.

The most famous captain of the three was Tinsley Lindley, the man who had a career total of fifteen goals in thirteen appearances for his country. He also held an England scoring record of having scored in nine consecutive games between March 1886 and April 1889. This record was eventually beaten by Ian Wright of Arsenal, more than a century later. 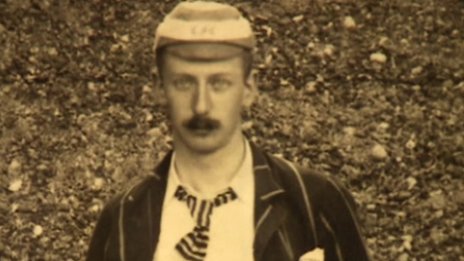 The High School also provided the highest scorer in the history of the FA Cup, Harry Cursham: 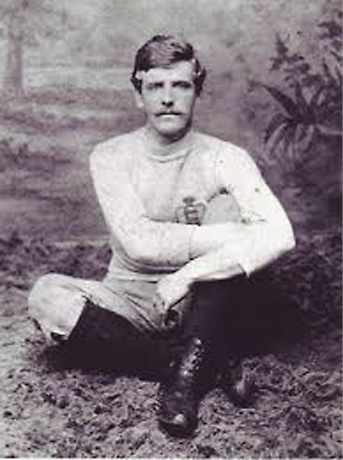 The High School also gave us Frederick William Chapman, who appeared in the Great Britain team which competed in the Olympic Football Tournament in 1908. Great Britain won the final 2-0 against Denmark, and Chapman scored the opening goal. Always called simply “Fred”, he is the only Old Nottinghamian ever to win an Olympic gold medal, and, given the limited number of countries who were playing football at this time, he had good reason to consider himself a champion of the world. Chapman went on to play for the  England amateur team on twenty occasions, captaining them at least once, thereby becoming the third captain of England to be provided by the High School.

Here is a picture of the Nottingham High School 1st XI in 1897. Frederick William Chapman, the winner of an Olympic Gold Medal, stands at the right hand end of the back row. A determined detective could make a code out of the bricks in the wall behind the team, and discover where the picture was taken. A large clue is that the team were standing in the modern Dining Room, at the end opposite the area where the meals are served: 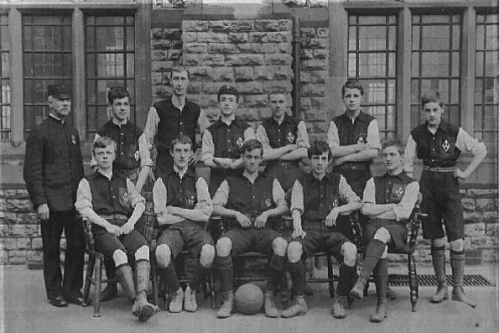 And here are his international caps: 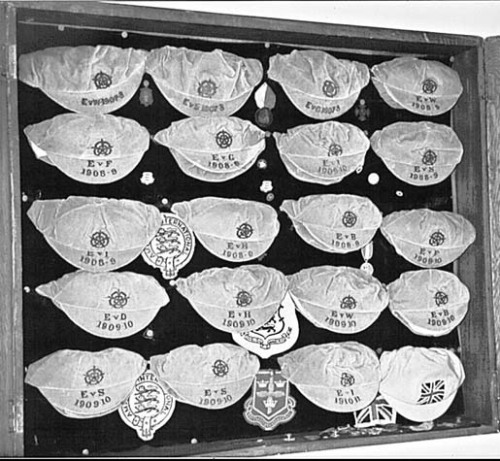 The High School switched to rugby after Christmas 1914. Ironically, this was shortly after football was seen to be an amazing peace maker during the First World War with the Christmas Truce which brought much of the Western Front to a temporary stop for a few days. Even so, it was well worth it, insofar as British casualties were running at the time at an average of 4,000 men a day killed or wounded: 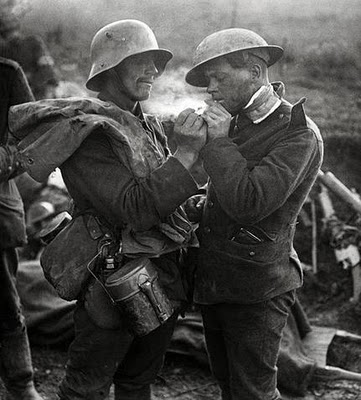 The two prime movers in the High School’s change to rugby were Mr Leggett of the Preparatory School and Mr Lloyd Morgan. When they volunteered to go to the war, Mr Kennard took over. He had captained the Lancashire XV and played for the North of England in an England trial. Here is Joseph Kennard with four of the First XV  in 1929: 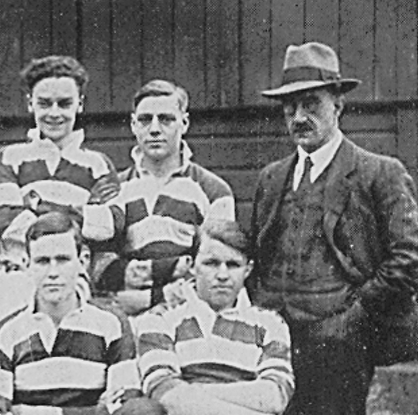 Mr Kennard could be a hard man sometimes, and occasionally he could justifiably be described as rather strange.

Around 1935 he was living at 58 Ebers Road in Mapperley, a small semi-detached house. By 1936, he had moved to No 41, a very much larger detached house with a larger garden. For some reason he was violently opposed to the Salvation Army and continually expressed his disgust that they would come and play outside his house in Ebers Road on a Sunday morning. By now he was seen as, in the words of Geoffrey Tompkin, as “exceedingly fierce with a bald head, a black military moustache and spectacles”.

We’ll have a more detailed look at the reasons why the change from football to rugby was made next time.