These vessels were in a convoy which was attacked by six German E boats ten miles to the west of Lizard Point, during the night of January 5th-6th 1944. All four ships were sunk. The casualties included HMS Wallasea, an armed trawler which was acting as one of the escort ships, the S.S.Solstad, the M.V.Polperro and the M.V.Underwood. This attack was part of the German attempts to disrupt the Allies’ obvious preparations for an invasion of Western Europe that coming summer.

What is so very striking about Naval war graves, however, having seen the last resting places of literally thousands of Army and Air Force casualties, are that the latter can often be very similar in age, rank or nationality, and perhaps even as far as regiments are concerned: in other words, the same kind of details may be repeated over and over again. With Naval graves, though, you feel almost as if a whole family is involved, with people of often widely differing ages, all having performed some specific job within the ship. And like a family, that ship is the sum of these individual parts.
The S.S.Solstad was a Swedish steam powered cargo ship originally launched in 1924 by Lewis John & Sons Ltd. of Aberdeen, under the name of the “Gatwick”. It weighed just under 1,400 tons, and was travelling from Swansea to London with a cargo of coal when it was torpedoed by the German torpedo boats, S-136 and S-84. The ship sank in three minutes with the loss of five lives. Here is the Solstad in two different companies’ liveries:

Alide Reicher was 53 years of age. She a stewardess on the Solstad. She is, I think, the only woman war casualty whose grave I personally have ever seen, and even more unique is the fact that she was Swedish, a neutral nationality in theory, and was serving on board a ship of the Swedish Merchant Navy. She really was somebody who gave their life for freedom:

The second casualty from the Solstad was Kenneth Allen who was killed aged only eighteen. Kenneth was a Deck Hand and the son of Alfred Anthony Allen and Minnie Allen of Blyth Northumberland. He was the husband of Marjorie Gertrude Allen of Gravesend:

The M.V. Polperro, registered in Fowey, had sailed from Manchester with a cargo of coal, joining a convoy bound for Penryn, Cornwall and then on to London. This is the only photograph that I could find:

The Polperro went down with the loss of all hands, namely eight Merchant Navy seamen and three Royal Navy gunners:

The wreck lies in 200ft of water. The Penzance graves from this nautical family are two Able Seamen:

The M.V.Underwood, almost three hundred feet long and weighing two thousand tons, was travelling from the River Clyde in Scotland to Portsmouth, with military stores including vehicles. The crew of fifteen seamen and three passengers was all lost. This photo shows the M.V.Tuaranga, which was the sister ship of the Underwood, but in all respects save its name, it is the same vessel:

The wreck of the Underwood was identified in 1975 by information on the boss of the propeller. This grave is that of the Radio Officer, Alexander McRae. He was 43 years of age and came from Carluke in Lanarkshire, Scotland. Graves do not have accents however. Alexander’s parents were William McRae and Annie McRae (nee Wilkie). His wife was called Edith : 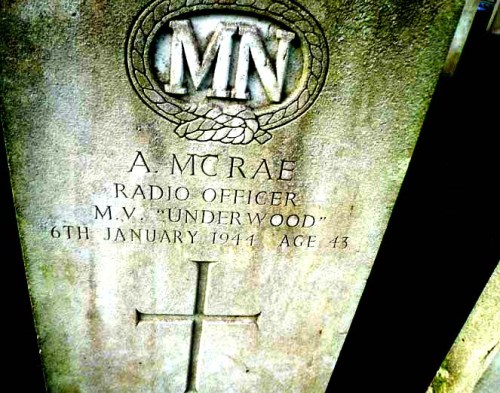 His Majesty’s Trawler Wallasea, (T-345) was an Isle Class Armed Trawler built in 1943. This vessel was part of the Royal Naval Patrol Service and weighed just under five hundred tons.

Seventeen members of the Wallasea’s crew are interred at Penzance.  This closely knit sea-going family includes an Able Seaman, the Cook, an Engineman, a Leading Steward, an Ordinary Signalman, a Seaman, a Second Hand, a Stoker and a Telegraphist:

All of these Allied vessels were sunk by German E-boats. These impressive vessels were capable of speeds up to almost 50 m.p.h. and were easily the most effective torpedo boats ever built:

Karl Müller, when he was the commander of Schnellboot S-52, was already credited with the sinking of the British destroyer Eskdale on April 14th 1943:

He was no doubt the very proud owner of his Knight’s Cross of the Iron Cross, awarded on July 8th 1943. This is the only picture of Karl Wilhelm Walter Müller which I have been able to find. The lettering across the photo is in German and may refer to copyright problems, but on the other hand, the long word, when re-examined in Photoshop, does appear to have a swastika in the middle of it, so perhaps it is from some archival source:

On this particular occasion off the coast of Cornwall, Müller was again in command of Schnellboot S-52. He was tasked with attacking convoys in the English Channel. Skilfully, Müller lay in wait for these particular ships of Convoy WP457, very close to the Cornish coast. His little fleet was then able to surprise the convoy by an unexpected attack from the landward side. This is the little cove where the German E-boat fleet sheltered. Look for the orange arrow:

This is the cove where the Germans took refuge. They were extremely close to the shore:

The soldiers guarding the telegraphy installations at Porthcurno presumed that the motor boats must be British and took no action. It was later said that “Their role was to guard the telegraph and not to act as coastal lookouts.” Such pathetic, pompous stupidity was to cost a great many lives.

At three o’clock in the morning of January 6th, 1944, the British convoy was more or less ready to cross Mount’s Bay where:

“The weather was fine with good visibility. It was moonlight with a south-west wind force three and moderate sea. Leaving the cove they prepared to attack the convoy.”

The cunning Leutnant-Kommander Müller had the enormous advantage of complete surprise because his attack came from the landward, Cornwall, side. The escort led by the aging destroyer H.M.S. Mackay was overwhelmed by the firing of no less than 23 torpedoes and four ships were sunk:

The German force’s first attack sank the Solstad and the second, some five miles south of Penzance, sent the Underwood, the Polperro and the Wallasea to the bottom. Nowadays, with the right knowledge from the Internet, these ships can be visited by divers. Look for the orange arrow:

The rest of Convoy WP457 continued on their way, while the brave civilians of the Penlee lifeboat made valiant attempts to rescue any survivors. Those still alive, of course, were faced with a very low water temperature because of the time of year. In total more than sixty people were killed including, as we have already seen, one woman, Alide Reicher, who was a stewardess on the S.S.Solstad which, technically, belonged to the Swedish Merchant Navy.
Overall, Penzance Cemetery holds twenty two naval casualties from this action with the majority, seventeen, being members of the crew of HM Trawler “Wallasea”.
In April 1944, the Fifth Flotilla under Leutenant-Kommander Karl Müller, was among the E-boats who carried out another audacious attack, this time on Exercise or Operation Tiger, a large-scale rehearsal for the D-Day invasion of Normandy which was being held at Slapton in Devon:

A total of 946 American servicemen were killed, with the almost inevitable communication problems causing many casualties from friendly fire. The majority of the casualties, however, were on the morning of April 28th, when a convoy of troops was attacked in Lyme Bay by nine German E-boats under the command of Korvettenkapitän Bernd Klug: 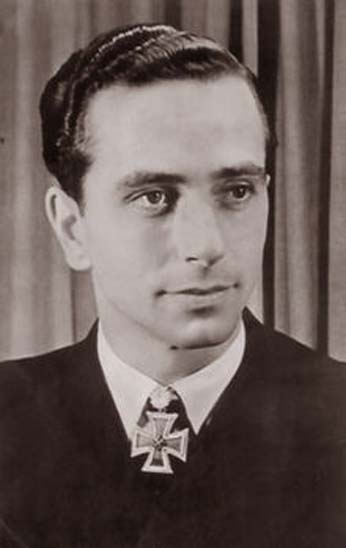 Leutnant-Kommander Karl Müller survived the war and returned to serve in the West German Navy from 1956–1957. He died in Celle in 1989 at the age of seventy two. Had he been wearing a different uniform in 1944, perhaps an American one, they would have made movies about his daring attack during the 1950s.
It would have been impossible to have written this article without the basic research having been made freely available by David Betts. His excellent book about this most exciting episode in World War Two is advertised here:

There are two final points. Firstly, the war graves in Penzance Cemetery are kept immaculate, every single one. In order to make the inscriptions visible, I have had to photoshop all my photographs and that is the reason that the graves look so peculiar. And last of all, the real cost of war is in these last two photographs. How sad a fate for “our dear Bernard” and a “dear husband and daddy” :