The Second Boer War (1899 –  1902) was fought between the British Empire and the two independent Boer (Dutch) states, the Republic of Transvaal and the Orange Free State, over the British Empire’s influence in South Africa. 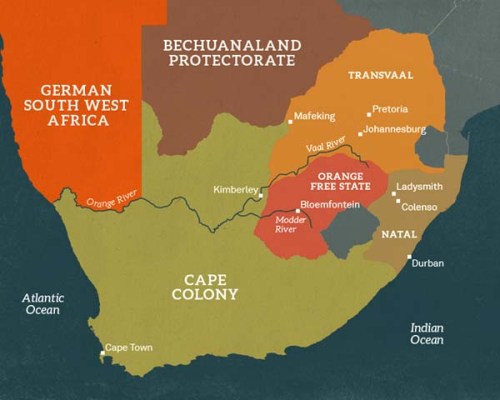 The catalyst for the war was the discovery of diamonds and gold in the Boer states.

Last time, we saw how William Henry Heath, the son of a farmer at Bestwood Park to the north of the city of Nottingham may have helped out on the farm, before joining the army and sailing off for a distant, exotic and exciting war in South Africa, the home of gold and diamonds. A large number of Britain’s soldiers in South Africa were transported there on the SS Winifredian, an extremely powerful and very fast steamer, with the rakish lines you’d expect in a ship of that calibre: 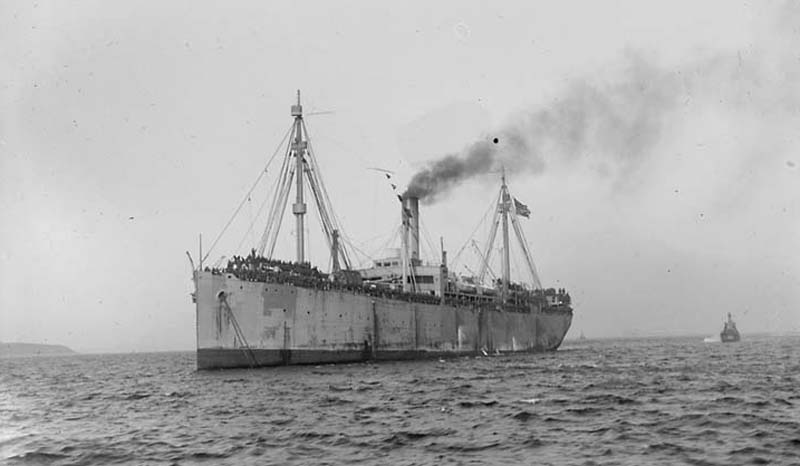 Needless to say, things did not go very well for William in South Africa. Before too many years had elapsed William was dead and buried in the thin dry soil of the veldt: 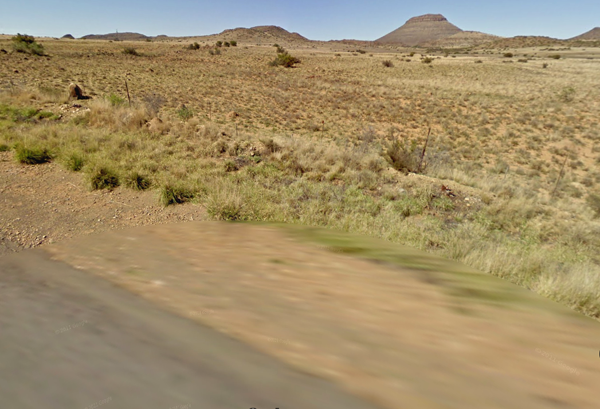 Here is a typical Boer War grave marker. It is in cast iron and reads at the top “For King & Empire”. Because it was made of iron, the embossed lettering tend to last very well in the extremely dry wind of the veldt: 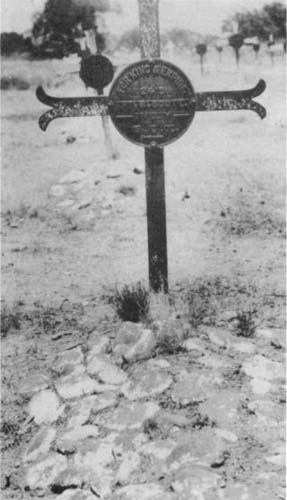 There is a certain amount of confusion about which unit William was serving in when he died. Two local Nottingham websites say that he was serving as a trooper in “The South African Constabulary”. On the other hand, the website with the Roll of Honour from the Nottingham War Memorial of the Boer War says that William Heath was a Private in the 11th Company of the 3rd Battalion of the Imperial Yeomanry. His service number was ‘1972’. Here are the Imperial Yeomanry in a colour print: 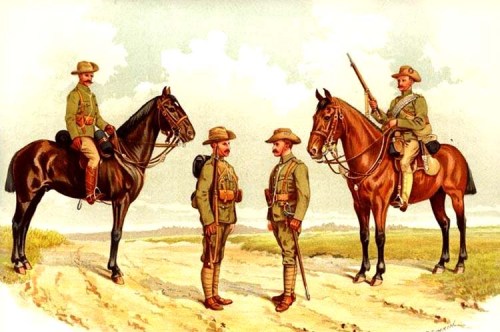 And here is just one member of the Imperial Yeomanry, complete with a dead white goose and his extremely alert horse, Dobbin:

William Heath, though, like more than 20,000 other British soldiers, appears not to have died in action but to have died of disease in Pretoria on February 14th 1902.

Illness, of course, despite all of the measures taken by the British Army, was the most frequent way to die in this war. The Royal Army Medical Corps had foreseen this, and had taken the precaution of mobilising more than 150 special units, along with 28 field ambulances and more than twenty hospitals of various types.

A thousand Indians from Natal were taken on to work as stretcher bearers. One of them would one day become extremely famous. At the time he was a young lawyer in Durban but he worked as a stretcher bearer during the Battles of Colenso and Spion Kop. Here he is, 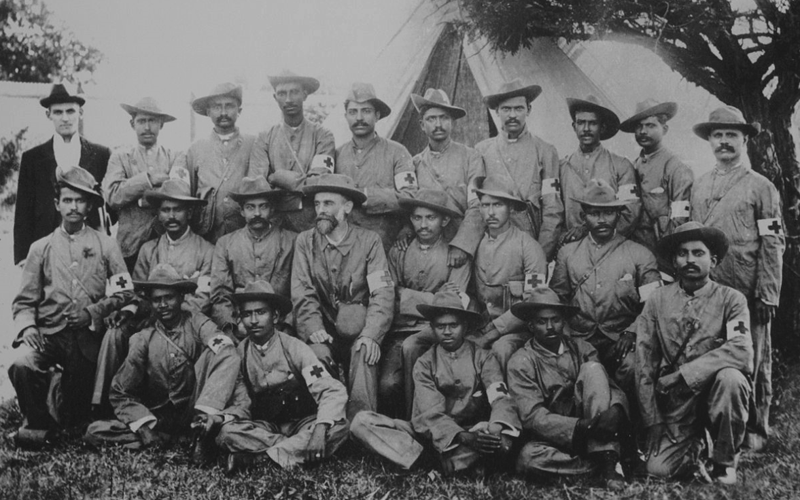 “This little brown man in the loincloth was a private man without wealth, without property, without official title or office. He was not a commander of great armies nor ruler of vast lands. He could boast no scientific achievements or artistic gift.”

“I am a Muslim and a Hindu and a Christian and a Jew and so are all of you.”

“An eye for an eye only ends up making the whole world blind.”

Did you spot him? He’s to the right of the white man with a beard in the middle row, and the man in the back row directly behind him has his hands on his shoulders. And who is he? Well, he’s the most mis-spelled famous person in the world. So, his name isn’t “Ghandi”.

William Heath’s younger brother, Leonard George Heath, was also, like his brother, a pupil at Grosvenor School but he then entered the High School on January 21st 1896. He was in the Lower First with Mr JS Jones in 1895-1896 (sixth of sixteen in the Form Order and in English, 8/12 in French and 14th / 42 in Writing). One of that sixteen was Edward Archer Thurman, a victim of the First World War, killed on December 3rd 1917 in Palestine and buried in Ramleh War Cemetery

Here is a section of the staff photograph from 1901. Mr Jones is in the centre of the back row. On his left, as you look at the photograph, is Mr Wilfrid Tyson Ryles, alias “Nipper” Ryles. To the right of Mr Jones, as you look at the photograph is Mr Samuel Rnssell Trotman, a teacher of Chemistry and Gymnastics. He would have needed to be fit to cope with a class of 78 pupils as he did in one particular year. You read it right. 78 pupils!!

In front of Nipper Ryles is Mr “Sammy” Corner, in front of Mr Jones is the Headmaster, the Reverend Doctor James Gow, and in front of Mr Trotman is Mr Francis Coverley Smith.

The following year, Leonard George Heath is no longer listed in the School List, and, indeed, by this point, namely July 1898, he seems to have left.

He does not figure in the 1911 census, but we do know that Leonard emigrated to Rio de Janeiro in Brazil where he married Miss Ida Gilbert. When the First World War broke out, the two of them then returned to sunny Bestwood, and Leonard immediately joined the Sherwood Rangers to fight the filthy Huns. He died of his wounds on March 14th 1916 by which time he was a Captain in the 3rd Skinners Horse, in the Meerut Brigade of the Indian Army. He was buried in Le Tréport Military Cemetery in France, and poor Ida, who died on March 25th 1918, possibly of Spanish flu, was buried at Bestwood Emmanuel Cemetery

Rather poignantly, in 1928, their father, Henry Heath, was still patiently ploughing the land at Sunrise Farm.

In his early career with the RAF, Fred lived in Rotherham, where he was training to be a wireless operator. He attended the local Technical College, and for his ab initio training in electronics, he studied topics such as radar and the many other technical devices which he would need to use as a Wireless Operator / Air Gunner.

The college is still there today:

Fred was staying at 94, Frederick Street, with Mr and Mrs Childs, as a lodger in their house. The latter acted more or less as surrogate parents, and in actual fact, frequently corresponded with Fred’s own parents, Will and Fanny. They reported Fred’s progress to them, and postcards were sent back and forth quite regularly. This is the reverse of the postcard of the School of Technology above:

This date proves that Fred had finished what must have been fairly elementary technical training relatively early in his RAF career. More of these postcards have survived and this one is of Boston Park in Rotherham:

The reverse has the same address as the card above and the message reads:

“74, FREDERICK. ST. Dear Mr & Mrs Knifton  First of all I hope that Mr Knifton has recovered from his illness & is getting about again. This is one of our local areas & is only about 8 minutes walk from here. Trust you are keeping well & also Fred. Haven’t heard anymore from him since he was home. Fondest of greetings always sincerely from E (&) W Childs”

Imaginative as most young men are, Fred chose the very same picture postcard to send home. His message was hardly informative:

It was probably when he was still being trained at Rotherham Technical College, that Fred, as a serving member of the armed forces, was invited on a distant, almost forgotten, occasion to be one of the people to meet the Mayor of Barnsley. The latter was the Lieutenant Colonel of the local regiment, and came round, as we would say nowadays, to “raise his profile”. One thing that Fred did remember was how overawed he felt given the high rank of the distinguished visitor, compared to his own status as a simple Aircraftman Second Class.

In similar vein, Fred had also been somewhat embarrassed when, in uniform, he was given a lift back home from Burton-on-Trent station, by Dr Love, the local doctor in Woodville, the village where Fred lived. Dr Love was himself a high ranking officer in the Royal Army Medical Corps during the First World War, and he had carried this rank with him, over into the local South Derbyshire Home Guard forces. Everybody in the High Street in Woodville was amazed when Dr Love stopped his car, at the time one of the only privately owned vehicles in the area, and out stepped Fred.