Imagine it is the late 1970s. We are walking down to the old Baseball Ground, and about to turn into Harrington Street. The floodlights of the ground are just visible:

My Dad, my brother and I used to park on what had been the Parade Ground at the old Victorian army barracks at Normanton, and then walk down to the football ground. If we were at all late for the kick off, Fred, my Dad, was quite capable of generating a punishing pace along the terraced backstreets. It was with complete justification that my brother would regularly accuse him of setting off like “a long dog” (whatever that was).
On one occasion, Fred was extremely late for the game, so rather than miss a second of the action, he just left the car on the grass verge of the Ring Road. He accepted as a necessary evil the inevitable parking ticket and fine he would receive, and paid it without demur, but both my brother and myself were advised, “Don’t tell your mother.”
This was not too dissimilar from an incident when he damaged his beautiful pale blue Hillman Minx quite badly by reversing it into an, admittedly, pale grey, well camouflaged lamp post, down near the bridge which went over the railway lines at Swadlincote Station: 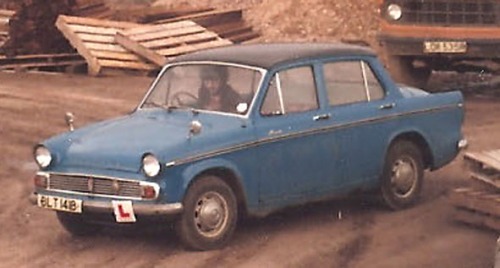 Again, he accepted the cost of the panel beater and a resprayed rear wing, on the basis of “Don’t tell your mother.”
Closer to the ground, Harrington Street was closed to traffic because of the thousands of people all rushing down to the game. The single floodlight is even more obvious:

Here is a backlit policeman on his horse, and more terraced houses, looking back past the long demolished Baseball Hotel: 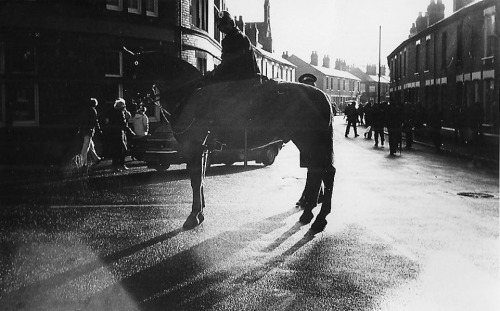 Two rather drenched policeman on their horses, walking down Shaftesbury Crescent. Look at the fashions! Look at the flares! 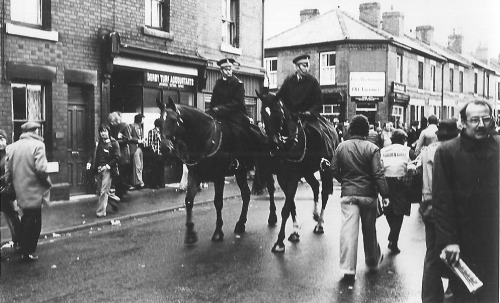 At last! These two policemen have the sense to find a little shelter from the weather:

They are at the back of the Normanton Stand, at the entrance to the Popular Side. The “Popside” was where hooligans of both teams would stand. There would be disorder at virtually every game.
Fred, as a man of some fifty or so years of age, was himself physically attacked, on two occasions, both of them by those lovable, loyal, warm hearted supporters of Newcastle United.

We had a period when we used to park the car in the playground of Litchurch Lane Junior School, for a mere 25p. One day, as we returned from the game, I was surprised to see large brown birds flying over our heads. Only when one of them crashed into the wall of the railway repair works, did I realise that they were not birds, but bricks, thrown by a group of discontented Newcastle supporters.

On another occasion, a group of Newcastle supporters set about giving a damn good kicking to an innocent young man and his girlfriend, who had the misfortune to be walking along Osmaston Road, just in front of us. My Dad, Fred, of course, armed with his RAF maxim of “it always happens to somebody else, never to me”, raced off to help out the young victims. I can remember how Fred grabbed one hooligan’s foot as he prepared to kick the poor young man, and then wrenched it around backwards as hard as he could. That must have hurt! Afterwards, I remember too how the young victim had been kicked so much that he had lost the face off his watch.

When I got home, I discovered a tear on my favourite green USAF war surplus jacket. That tear was present in my T-shirt as well, and my back had a long red mark on it. I have always reckoned that that was as close as I ever got to being stabbed, by somebody I did not even see, in a mêlée of whirling bodies.
The opponents for this match are, I think, Norwich City:

They are playing in yellow shirts and white shorts, which was a slight change from their normal kit with green shorts:

The problem was that in the early 1970s, lots of people still had black and white televisions, and Derby and Norwich would have looked very similar, as Derby were wearing white shirts with dark blue shorts, and Norwich yellow and green. Here Derby press forward with yet another attack:

I can’t remember the score of this game, but I think it is safe to say that Derby probably won. They used to beat Norwich fairly regularly in the 1970s.