The Nottinghamshire UFO flap of July 1967

I have already mentioned in a previous article, the wonderfully titled “A Werewolf in Cambridgeshire. Run away!!” that I had received “Haunted Skies Volume One” by John Hanson and Dawn Holloway as a Christmas present in 2013.

The following year, for Christmas 2014, I was lucky enough to be given Volumes 2-6, which covered the history of British UFOs from 1960-1977. And I have read the lot! It has taken me until April 2015, but I have, more or less, made it. I now sit eagerly at home awaiting the arrival of the last four volumes in the series, which I ordered last Sunday. These will complete the full set.

The ten volumes are an absolute tour de force and a total labour of love which will become a modern classic. If anything, the books have become better and better as the volumes have gone by. I would urge you strongly to have a look at the two authors’ pages on Amazon, if you find this topic at all interesting.
When a number of UFOs are sighted in a particular locality over a fairly short period of time, this is known as a “flap”. Over the years, around the world, there have been more flaps than you could shake a little green man at. In 1967, there was one in Nottingham.

It started, perhaps, on February 13, 1967 in Radford, an area of mainly Victorian terraced houses a very short distance to the north west of the city centre. Look for the orange arrow, near the “O” of Nottingham: 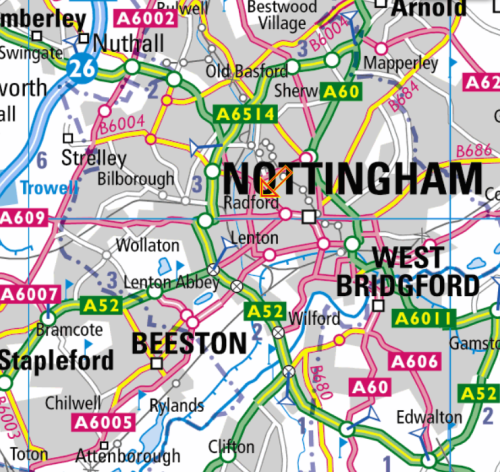 It was ten minutes to nine in the evening and Frank Earp and Gerald Montague were hard at it on their allotment. It must have been almost totally dark, dark enough, at least, to see a diamond shaped object motionless in the night sky. It had a red light underneath and suddenly changed shape before flying off at fantastic speed. This. hopefully, is similar to what Frank and Gerald saw:

Five months later, on July 2nd 1967, reports came in of a bright light with three prongs, motionless in the sky over Knighton Park in nearby Leicester, only 28 miles away from the “Queen of the Midlands”.
The main highlight of the Nottingham Flap came three days later during the evening of Wednesday, July 5th 1967.  An absolutely classic flying saucer was seen by a very large number of witnesses. It was motionless over the Clifton Estate, just above the horizon.

Clifton Estate is to the south west of the city centre. For the most part, Clifton is a council estate built from 1952 onwards, largely to rehouse the slum areas of the Meadows where, as late as the mid-sixties, barefooted children were by no means unusual. At one time Clifton was the largest council estate in Europe. Look for the orange arrow:

Eventually, that balmy summer’s evening, somebody called the police, possibly for the protection of any little green men that might emerge from their spacecraft. By now, well in excess of a hundred would-be ufologists were eagerly awaiting developments on the rising ground near to the local Fairham Comprehensive School:

If my memory serves me well, this was a very large all boys’ school, which has now been closed down:

Years later, an old boys’ reunion got a little out of hand:

When they eventually arrived at the UFO landing site, the boys in blue, of course, did not see any UFOs and told the locals that they were the hapless victims of an optical illusion. Mrs Marjorie Cowdell, however, would have none of it. She insisted to the Fighters of Crime that she had seen a flying saucer “swim” down to the ground.

This was big enough news that a host of reporters were sent to investigate by the national press (in actual fact, the Daily Sketch, which has now, alas, gone exactly the same way as Fairham Comprehensive School).

Here is the story, which appeared in this most intellectual of red top tabloids (presumably the reason it folded) on Thursday, July 6th, 1967:

More than 100 people claimed yesterday that they saw a flying saucer land.
They were “spotting” on high ground near Fairham Comprehensive School in Clifton, Nottingham.
Housewives rushed from their homes when it was reported that a flying saucer about 30 feet in diameter had come down. Many people said that the object was disk shaped and silvery.
Police searched the area but found no trace of anything having landed. A spokesman said, “It must have been an optical illusion caused by sunlight and a cloud of dust.”

Mrs Marjorie Cowdell of High Bank, Clifton said, “I don’t care what the police say. I saw a flying saucer swoop to the ground.”

The stream, almost a flood, of “Close Encounters of the First Kind” continued, this time at Wellow, near Ollerton, some twenty miles to the north of Nottingham. On Saturday, July 8, 1967, schoolteacher Bernard Day and his wife, from Newark-on-Trent, were driving along just after nine o’clock in the evening. Suddenly they saw, according to the Nottingham Evening Post, what looked like: 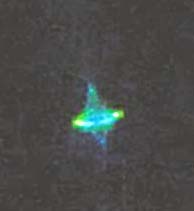 “A child’s top, spinning in the night sky, from one side to an upright position, for over forty minutes, surrounded by bright light. I fetched Police Constable E.Holmes, from Welland Police Station, who had a look through binoculars and said, “I wouldn’t even be able to guess its identity. I’ll have to inform Inspector R. Street. He will make some enquiries.”

What was presumably the same incident is featured on a rather interesting website I found. No exact details are given, but it would seem to be the same series of events. It reads:

“July 1967. 2110 hours. Saturday. Location – Nottingham, Nottinghamshire. A member of the public, teacher Mr Doy, reported seeing a UFO over a local school and a PC HOLMES attended the school  and confirmed the object in the sky. He then reported the sighting to his duty officer, Inspector R .Street.

PC HOLMES stated that the object was a bright light spinning on its own axis in a stationary position above the school. The police could not offer any explanation for the UFO.

I’m not entirely satisfied with a policeman called R. Street and what about PC Holmes? Surely all of his mates must have called him Sherlock?

Whatever the case, the Nottingham Roswell Saga went on. On Monday, July 10th, only four days later, a bright white triangle was seen over Radcliffe-on-Trent at half past eight in the morning:

Radcliffe-on-Trent is to the east of the city, a mere two or three miles away from the very centre. Look for the orange arrow: 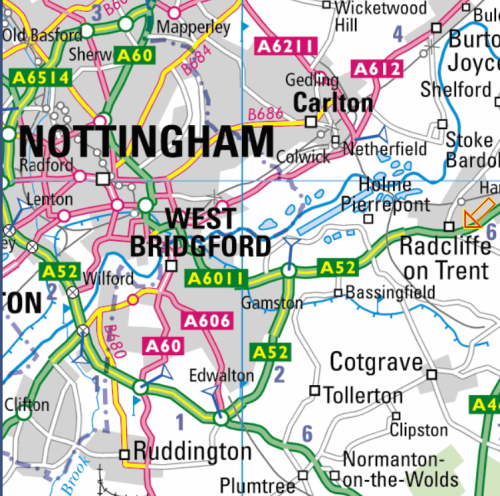 Interestingly, the locations of all three sightings are visible on this map. The orange arrow points to Radcliffe-on-Trent and Clifton is in the bottom left of the map. Radford is below the big, black N-O of Nottingham.

The very final case I can find comes from Newark-on-Trent (just over twenty two miles from Nottingham). It was August 10th and around 10:15 in the late evening. For some unknown reason, Dave Robinson was taking a stroll with his girlfriend in what must have been almost pitch black woodland at Stapleford Woods. Look for the orange arrow:

The two young lovers had just reached a clearing at the edge of the woods when the young lady noticed two lights in the sky. They were possibly round, possibly oval, and yellow in colour, resembling paper. Some six feet and five feet across respectively, they were motionless over a line of trees around half a mile in the distance. I managed to find these likely contenders on the Internet:

After the event, William Blythe of Mansfield interviewed them. Let Dave take up the story:

“Within minutes they disappeared, replaced by a flashing red light, which moved to our right, climbing up and over some trees. Five minutes later we saw the lights again in the sky, now on our right, coming towards us, about a quarter of a mile away.

My curiosity aroused, I drove slowly towards the lights, losing sight of them as I drove around the bend. When I reached the spot where I had seen them, I flashed my headlights and this craft appeared over the trees. Astonished, I stopped the car and listened. Still no sound.

We watched the craft with amazement, as it hovered 20 feet away from us at about the same height off the ground, allowing us to see it had a curved bottom and top, with three squared windows, spilling orange light, and a brilliant light projecting downwards from the top.

As it moved overhead, I became frightened and drove away, fearing what
was going to happen next.”

And that’s it. This was quite impressive by the standards of the middle 1960s, especially when compared to nowadays, when 84% of all programmes on Satellite TV are devoted to aliens, UFOs and government cover ups. If you find this topic of any interest, don’t forget the “Haunted Skies” books by John Hanson and Dawn Holloway. They really are worth a look.  This is the edition which set me off on the trail of the Nottingham Flap and Mrs Marjorie Cowdell: 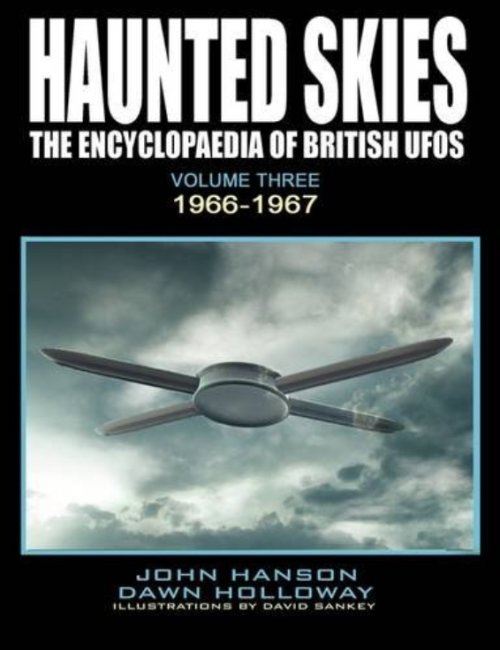 Next time there will be a host of Internet sites to look at when I try to track down the UFO that crashed just south of Mansfield. That was a very, very, brave thing to do!