Have you ever had the day from hell? When more or less everything that could go wrong, did go wrong?

Well, trust me, you will never approach the levels achieved in the 1680s by Jack Ketch, the King’s Executioner: 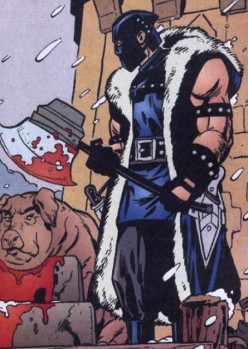 On July 21st 1683, Jack attempted to execute Lord Russell. The story comes from  the incomparably named “Great B#stards of History: Famous Illegitimate Children Who Went on to Achieve Greatness”. That title was the winning entry in the “Book Title of the Week” competition last week. Here’s Jack:

“Ketch wielded the axe with such lack of simple dexterity that the victim suffered horrifically under blow after blow, each excruciating but not in itself lethal. The gory display created such outrage that Ketch felt moved to write and publish a pamphlet in which he excused his performance with the claim that Lord Russell had failed to “place himself as was most suitable” and that he was therefore distracted while taking aim on his neck.”

Blame anything. Blame anybody. The victim. The bad weather, A loudly barking dog. My little brother. Never admit you are a total incompetent.

Two years later, on July 15th 1685, Ketch was given the job of lopping off the head of James Scott, the Duke of Monmouth.

“Cometh the hour, cometh the man.” as they say. The execution of Lord Russell was a smooth job, slickly done, compared to what would happen with the Duke of Monmouth. But Jack Ketch could not turn down this opportunity for a comeback.

This was the big one. The climax of his career. Tower Hill in London. Thousands and thousands of people watching. And big money if he did it right.