More and more water, most of it under Trent Bridge (1)

In a previous article, I wrote about the flooding of Nottingham during  the modern era, and the ways in which we have learnt lessons from the floods of 1947 and constructed concrete embankments and sluices so that the River Trent is nowadays, to all intents and purposes, relatively tame. (“relatively” being the operative word.) If you walk down to Trent Bridge and look underneath the bridge on the City side, directly beneath the Riverbank Bar and Kitchen, however, you will see how the flood levels of previous years of watery disaster have been recorded. They are scarily impressive and well worth a visit:

The very first records of floods in Nottingham are more a case of inference than anything else. According to the (Royal) Journal of the Statistical Society, Volume XLI and “The Insurance Cyclopaedia” by Cornelius Walford (I need to get out more):

“29 A.D. There was a great overflow of the River Trent in England”.

In 214 A.D. the entire River Trent was again in flood and overflowed its banks by some 20 miles on each side from the normal course of its flow. Many people were drowned as the whole Trent valley was awash and there was great destruction. Both of these dates are during the Roman era, although Nottingham was not, as far as I know, a Roman town. Perhaps they knew that an underlying band of hard rock could be used to ford the river and its adjacent marshes. Just to establish our dates firmly, here is a Roman. Like every single Roman, he is a legionnaire, although he doesn’t look particularly ill to me, but that hat is really something: 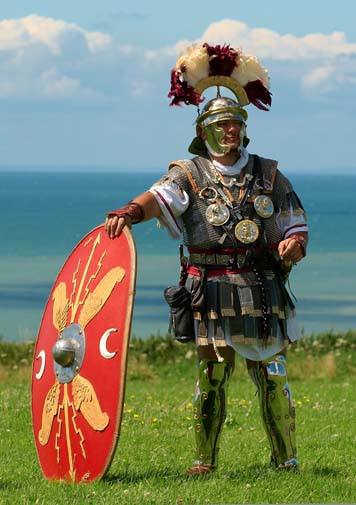 In 525 A.D. the entire Trent again burst its banks and a great number of cattle were drowned. The locals at his time may well have been Celts since we know that Nottingham, in the Brythonic Celtic language was called “Tigguo Cobauc”, meaning “The Place of Caves”. The Welsh may have been aware of Nottingham’s existence since they called it “Y Ty Ogofog” and even the distant Irish had a word or two for it, namely “Na Tithe Uaimh”, “The Cavey Dwelling”. Here are some Celts, managing to appear very, very fierce indeed, although admittedly, there is more than a dash of Village People in the overall look, especially the one at the front who may have no clothes on at all:

Whoever the locals were in 530 A.D., they would certainly have got extremely wet at some point. The mighty River Humber is known to have flooded extensively onto adjacent low-lying ground and most of the region’s cattle were drowned. Much of that excess of water, of course, was bound to have come from the River Trent, which feeds into the Humber. It is difficult to see how Nottingham, at the side of the River Trent, of course, could have escaped floods of such severity. It was slightly after this date that Nottingham, by now a small group of wooden huts and a line of washing, came under the sway of the wonderfully named “Snot”, an Anglo-Saxon chieftain. The place where “The Mighty Snot” lived was immediately called “Snotingaham”, the “home of the people of Snot the Magnificent”. At this time, “Snotingaham”, was part of the Kingdom of Elmet. Here is an Anglo-Saxon chief and his friend. What impressive elmets they are wearing:

I just couldn’t resist that!

Next time, we will see what happens when Ragnar Lothbrok and his pals arrive in Nottingham on a seven-day-cruise in 867AD.

16 responses to “More and more water, most of it under Trent Bridge (1)”